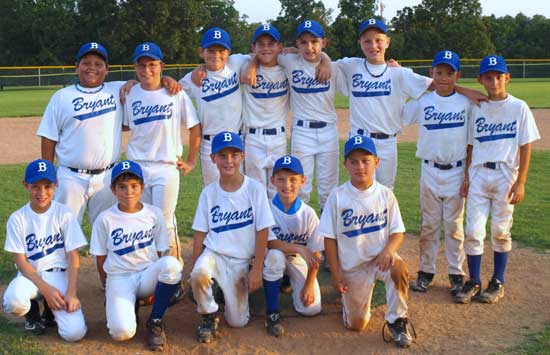 In preparation for the upcoming District, State and Regional tournaments, the Bryant 9-year-old All-Star team participated in the Sylvan Hills Sherwood Optimist Club’s Father’s Day tournament on June 19 and 20.

In the championship game, the All-Stars squared off against Little Rock Jr. Deputy (Clark) for the second time in the tournament, and posted an 8-0 win. Bryant struck quickly in the bottom of the first for three runs as Catton led off with a walk and Chambers doubled him home. McFarland then walked and stole second. With Dupree at the plate, consecutive wild pitches from the Little Rock hurler allowed both Chambers and McFarland to score, to make the score 3-0.

In the second, the lead was increased to 4-0. Grant walked, stole second and advanced to third on a throwing error by the catcher before crossing the plate on ground out by Holt.

In the fourth, Grant was hit by a pitch to lead off and then Mullings walked. Catton beat out a bunt that stopped on the first base foul line a few feet in front of the bag, with Grant scoring all the way from second and Mullings taking second. Chambers followed with fly-ball single to left that scored Mullings and advanced Catton to third. McFarland concluded the scoring with a sacrifice pop fly to the shortstop on the outfield grass, which allowed Catton to tag and score.

Grant was the winning pitcher as he scattered four hits while fanning five without walking a batter.

After a scoreless first inning, Bryant struck for two runs in the top of the second without the benefit of a hit. Dupree opened by drawing a walk and took second on a wild pitch. On ball four to Grant, Dupree stole third with Grant advancing all the way to second. After taking two called strikes, Greiner grounded out to first, with Dupree scoring and Grant taking third. With Holt at the plate, Grant slid safely home on a wild pitch.

After striking out three batters in the first, starting pitcher Chambers got the first two to start the second and then gave up consecutive hits before Dupree snagged a grounder to third and beat the runner to the bag for a force out to end the inning.

Cowell led off the third by getting hit by a pitch. Mullings ran for him and advanced to third on two wild pitches and scored on an infield single by Lessenberry.

Little Rock changed pitchers and Dupree greeted the new hurler with a single on a fly to right that advanced Lessenberry to third, with Dupree taking second on the throw. Taylor pinch-ran for Dupree. With Grant at the plate, a wild pitch scored Lessenberry and moved Taylor to third. Grant then walked and advanced to second before Greiner singled on a grounder to right that scored both runners.

Little Rock scored its lone run in the third when, with two outs, Grant attempted to pick a base runner off second and threw the ball into centerfield, which allowed the runner to come around to score. Bryant quickly got the run back in the fourth when McFarland led off by drilling a pitch down the left field line for a triple then later scoring on a wild pitch.

In the second game of pool play, Bryant pounded Monticello 19-0 in just three innings by belting out 13 hits and drew eight walks, with all 13 players reached base at least once and 11 different players scored at least one run. The hitting stars were Chambers, who was 4 for 4 with a triple, an RBI and three runs scored, and McFarland, who was 2 for 3 with a triple, two RBI and two runs scored. The team also rapped out four doubles, one each by Catton (who scored three times), Grant (who had two RBI and scored twice), Nguyen, and McEntire. On the mound, McFarland and McEntire combined to limit Monticello to just one hit, while striking out five and walking just one.

Advancing to the single-elimination tournament as the No. 1 seed, Bryant faced the Little Rock Jr. Deputy Titans and quickly fell behind 1-0 as they committed two errors and allowed a single in the first. However, the team quickly tied the score as Catton led off the bottom of the first with a double and later scored on a wild pitch.

In the second, they loaded the bases as Dupree reached on an error, McEntire got an infield single, and Lessenberry singled to center. McEntire scored on a wild pitch and then Catton plated the other two with a ground ball single to left to make the lead 4-1.

They increased the lead in the third when McFarland led off with a double and later scored when Cowell grounded out to second. In the fourth, Bryant run-ruled the Titans by scoring six times, as they collected a walk and six hits, the biggest of which was a two-run, bases-loaded double by Grant that ended the game with an 11-1 score.