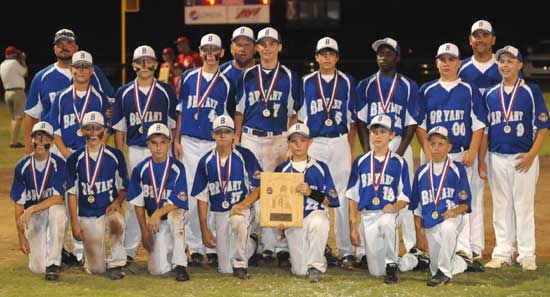 After the Little Rock Junior Deputy All-Stars scored a run in the bottom of the first inning, Garrett Misenheimer and Hayden Knowles combined[more] to pitch five scoreless innings and the Bryant All-Stars gradually built an insurmountable lead on the way to a decisive 9-1 victory at Bishop Park Tuesday night. 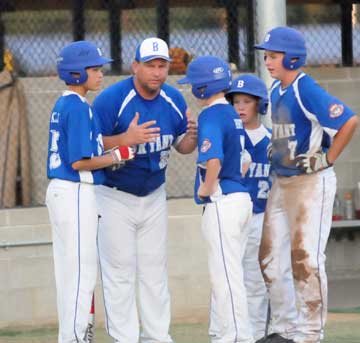 The win secured the championship of the Cal Ripken 12-year-old (70) State Tournament. Bryant will represent the State at the Southwest Regional Tournament in Eagle Pass, Texas starting July 22.

A walk, a stolen base, a single and a squeeze bunt produced the Junior Deputy run. A second runner was thrown out trying to score. 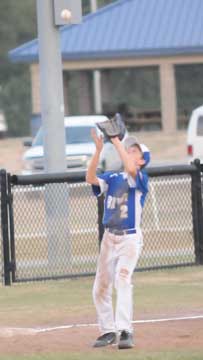 Bryant had taken a 1-0 lead in the top of the inning when East singled to left, stole second and scored on Knowles’ two-out single.

Both teams threatened in the second. For Bryant, Hastings belted a two-out triple to gap in right-center but was stranded. For Little Rock, a pair of singles and a sacrifice had runners at second and third with no one out. But Misenheimer picked off the runner at second then ended the threat with a strikeout.

The Stars snapped the 1-1 tie in the top of the third. East singled and stole second but, after Allen walked, he was thrown out trying to take third. Misenheimer drew a free pass then Knowles came through with a drive to left for a two-run double. After Hurt singled, Kelly greeted a new pitcher with an RBI single to make it 4-1.

A lead-off single, a stolen base and a passed ball gave Junior Deputy a chance to score in the third as well but, again, Misenheimer got out of the jam inducing a comebacker to the mound, a pop to Orender at third and, after a walk, getting the third out on strikes. 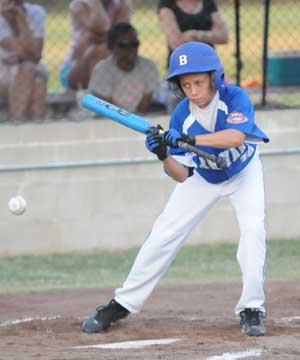 And the Bryant bats went back to work. Orender singled to start the bottom of the fourth. After he stole second, East laced a drive just inside the line in left and raced to second when the throw came in to hold Orender at third. But Orender scored moments later on a groundout by Kyzer and East followed when Misenheimer reached on an error. Knowles knocked Misenheimer in and the lead was 7-1.

Misenheimer overcame a lead-off walk in the bottom of the fourth by striking out the side.

Bryant tacked on a run in the top of the fifth. Hastings singled and Orender sacrificed him to second. East singled then Kyzer drove in the run with a sacrifice fly.

Knowles took over on the mound in the home fifth and retired the side in order when, after an infield hit with one out, the runner was thrown out by Hurt, the Bryant catcher, when he tried to steal. 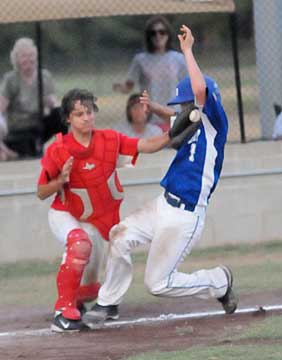 Hurt led off the top of the sixth with a double. He advanced to third on a wild pitch and scored Bryant’s final run on a groundout by Kelly.

Knowles then eased through the final three outs with a pair of strikeouts around a one-out single, getting the final out on a pop to East at short. 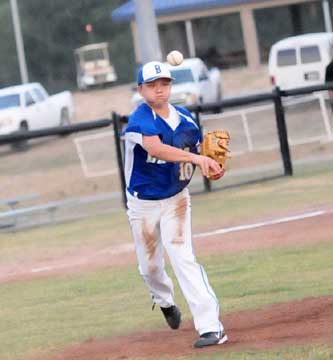 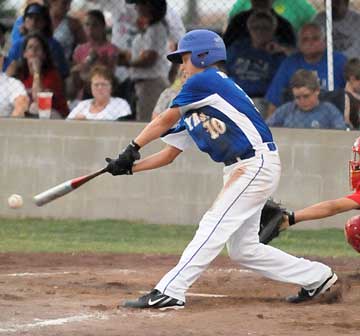 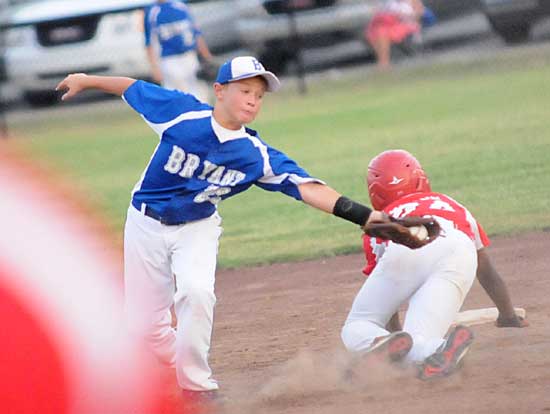