Bryant Blue closes out season with 14-0 win over Benton 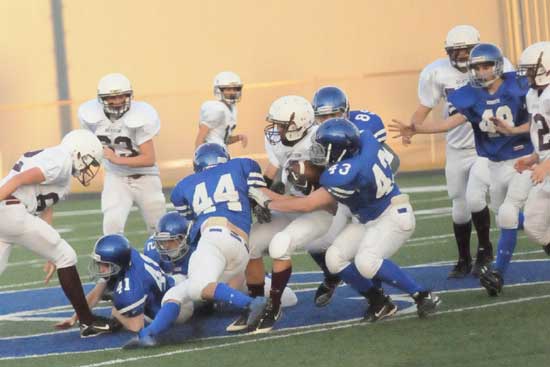 Liam Miller was the proverbial “Johnny on the spot” in the final game of the season for[more] the Bryant Blue Hornets eighth grade team of Bethel Middle School on Tuesday night.

Miller scored both of the touchdowns in the Hornets’ 14-0 win over that Benton Panthers eighth grade team at Bryant Stadium. The first came midway through the second quarter when Bryant quarterback Gunnar Burks completed a pass to Nick Hardin who had run a post pattern. Hardin made the catch in stride and was hit at about the 15. The ball came loose and rolled forward where Miller, who had been running a pattern more toward the sideline, raced in scooped and scored from about the 11.

That provided the game’s only points of the first half.

In the third quarter, the Hornets drove from their own 34 and nearly took up the entire period getting to the Benton 27. There, a procedure penalty knocked them back the Burks was sacked by Benton’s Tyler Nitschke back at the 39. Running a reverse, Miller picked up 4 yards then, on the next play, he ran the post pattern. But Burks, under pressure, under-threw the pass a little. It looked like it would be intercepted but the ball bounced off the hands of two Panther defenders and into the arms of Miller who was behind them with nothing between him and the goal line. He scored with :41.6 left in the third quarter.

Jordan Gentry added a run for the two-point conversion to set the final score.

The Hornets followed that with a squib kick that Benton’s Drew Dyer fielded at the 41. Trying to get outside for a return, Dyer was smacked and the ball came loose. Bryant’s Logan Allen recovered at the 39.

Behind the running of Gentry, Devin Howard and Pierce Finney, the Hornets drove to the Benton 23 where, on fourth down, Burks threw the first pass of the series, a short one to Howard who bulled his way 16 yards to the 7 where he was separated from the football. Benton’s Hunter Howe recovered. 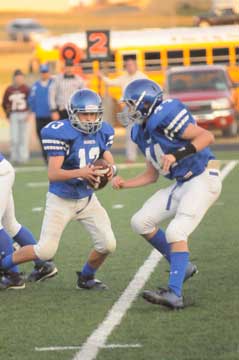 The Panthers, with 4:20 left, began one last try to get on the board. With quarterback Sam Eddington completing 4 of 5 passes including a 23-yarder to Adontae Winson, Benton drove to the Bryant 29.

But the next three throws fell incomplete and when Finney picked off his fourth-down pass, the Hornets had sealed the shutout victory.

The Hornets defense came up big throughout the night, starting with the Panthers’ first possession of the game which came after they blocked Evan Lee’s quick kick and took possession at Bryant’s 49. A 20-yard pass from Eddington to Colton Nix put the Panthers in scoring position. They reached the 20 where, on second down, J.P. Marrero and Austin Fason stopped Dyer for a loss.

Eddington’s third-down pass was incomplete then, on fourth down, Dyer was stopped by Marrero, Fason and Jake Hall and the Hornets took over on downs.

Bryant struggled to the move the ball as well, going three-and-out. Benton got good field position at the Hornets’ 47. But, on first down, Dyer was dropped for a loss by Peyton Robertson and Walker Brown. On second down, Eddington lost 2 more yards when he was sacked by Marrero.

Benton punted and the Hornets put together their first scoring drive, keyed by Burks’ passing. He swung a pass to Gentry that picked up 13 yards and, a play and a penalty later, he dropped one off to Howard that he turned into a 28-yard pick-up. With the addition of a face mask penalty, the Hornets were at the Benton 29 and they scored on the next snap.

Neither team moved the ball much the rest of the half, which ended with Gentry intercepting an Eddington aerial and returned to the 35.

The Hornets’ second-half touchdown drive was keyed by a trio of third-down conversions before the touchdown, which also came on a third-down play. On the first third-down conversion, Burks threw to Howard for 8 yards. On the second, Burks made a nifty run on a keeper to pick up 12 yards and a new set of plays. From the Benton 28, the Hornets faced a third-and-3. Howard pounded out a 6-yard run to keep the drive alive.