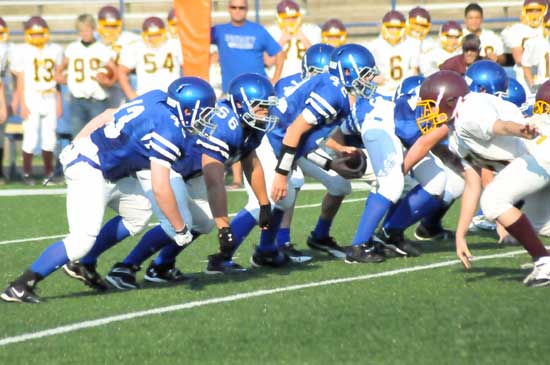 A holding penalty had put them in a hole so, trailing 7-0 with about 4:30 left in the third quarter, the Lake Hamilton[more] Wolves eighth grade team faced a fourth-and-20 at their own 37-yard line Thursday evening at Bryant Stadium. Punt time. No problem. 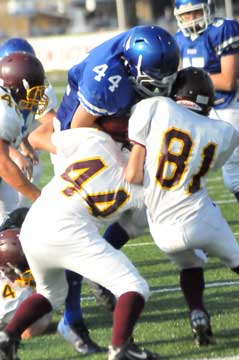 Little did they know, however, that the 3-yard run by quarterback Dallas Baldwin to get some of that loss back would be their last offensive snap of the game.

The Bryant Blue Hornets of Bethel Middle School at up the last 4:19 of the third quarter and the first 3:52 of the fourth with a march that concluded with Ethan Southard’s 23-yard field goal to make it a two-score game.

On the subsequent kickoff, the Southard squibbed the ball as he had all game. And this time, the Wolves couldn’t handle it. Jordan Gentry recovered for Bryant at the Lake Hamilton 44 with 3:07 left to play.

The Hornets proceeded to eat up the rest of the clock to nail down a season-opening 10-0 win.

Lake Hamilton’s offense snapped the ball just three times at the very start of the second half, managed 5 yards then never saw the ball again. The Wolves actually only ran 14 plays in the entire game to Bryant’s 43.

Gentry wound up rushing for 99 yards on 17 carries and fullback Devin Howard added 33 yards on six tries. Quarterback Evan Lee rushed for the lone touchdown of the game and completed 5 of 8 passes for 57 yards. 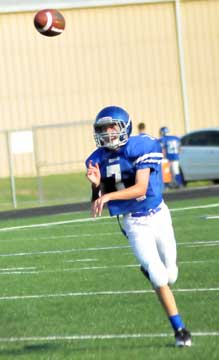 The Hornets took the opening kickoff and marched 38 yards in eight plays to their touchdown. A long return of the opening kickoff by Miller provided the field position. He nearly went the distance himself. The last man for the Wolves knocked him out of bounds.

From there, it all came on the ground with the longest run Gentry’s 11-yard burst to the 16. Howard converted a third-and-4 from the 10 and, a play later, Lee snuck it in.

The Hornets ran in a two-point conversion but a procedure penalty negated the play and Southard entered, nailing a 25-yard extra point kick to make it 7-0.

Lake Hamilton went three-and-out on its first possession. Two plays were stuffed for no gain. Miller made the play on one of them then Jake Hall and Ronnie Beard teamed up on the other.

After a punt, the Hornets drove from their own 12 to the Wolves’ 31 before a penalty and a pair of incomplete passes, one of them a drop, ended the threat. The drive was highlighted by Lee’s 16-yard completion to Howard. From the 31, Gentry sliced for 11 yards but the run was negated by a holding penalty. 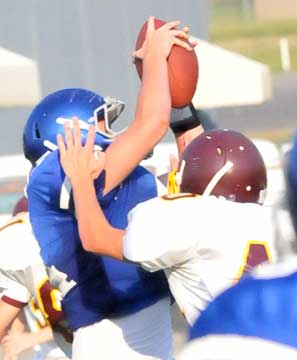 On fourth down from the 37, Lee’s pass was intercepted by Lake Hamilton’s Hunter Daley.

With 1:30 left in the half, the Wolves took over at their own 26 and put together their best drive of the night, keyed by the running of Baldwin. But, on second-and-5 from the Bryant 20, Baldwin was stopped for no gain by Hall and Austin Fason and time ran out, leaving it 7-0 at the half.

A lot of Bryant Blue’s drive to the clinching field goal featured Gentry and Howard but, when the Hornets faced a third-and-6 at their own 42, Lee and Miller connected on a clutch pass for 16 yards and a new set of downs.

A fumbled snap nearly sidetracked them at the Lake Hamilton 27 but Lee got back on it and, on the next play, Gentry dashed for 10 to set up a third-and-1. Lee kept for 4 and the first down but, on consecutive plays, the Wolves dropped the Bryant quarterback for losses. Nicho Fortanelli and Nathan Cole made the first stop then Eli Jackson got a sack.

On third-and-20, however, Lee rifled a pass to Miller for 16 yards. From the Wolves’ secondary, Jarrod Woodall and Daley saved the touchdown at the 7.

But Southard came through with the 3-pointer.

The Hornets return to action on Thursday, Sept. 15, at Russellville East.