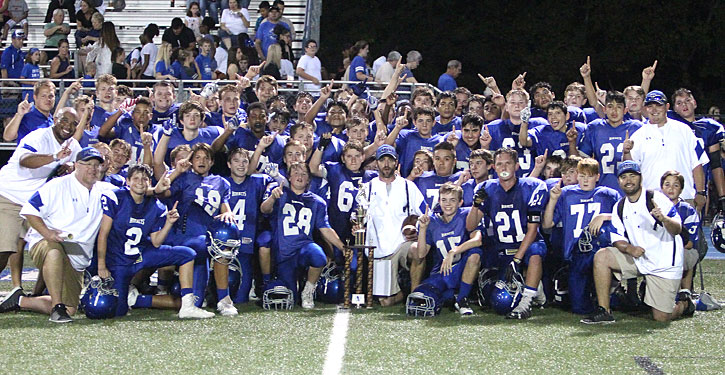 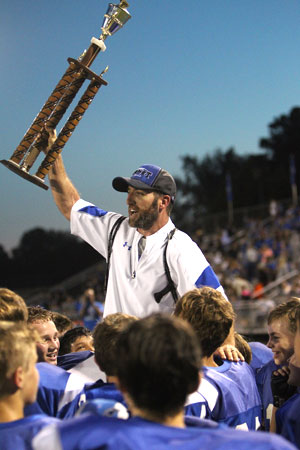 Bryant Blue head coach Josh Akers celebrates with his team after the 12-6 win in the Hornet Bowl. (Photo by Rick Nation)

The 11th Hornet Bowl went right down to the nub on Thursday night.

On the final play of the game, Noah Davis of the Bryant Blue Hornets from Bethel Middle School intercepted a pass in the end zone to nail down a 12-6 victory over the rival Bryant White Hornets of Bryant Middle School.

Bryant White had driven within 11 yards of a tying touchdown and the chance to take the lead with a conversion. With time running out, quarterback Austin Ledbetter “clocked” the ball, a pass at his feet to stop the clock with :17.4 to go. It came moments after his 7-yard completion to Aiden Adams.

After a false start penalty moved the ball back to the 16, Ledbetter threw towards the end zone looking for Myles Aldrige only to have Hart Penfield of Bryant Blue knock it down with :11.4 left. 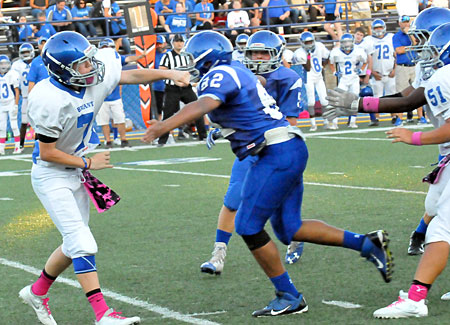 Ledbetter scrambled for 4 yards on third down, setting up a fourth-and-11 at the 12. Blue took a timeout to set up its defense and, when play resumed, Ledbetter tried to find Aldrige in the end zone again only to have Davis made his leaping interception as time ran out.

Blue had the best opportunities to score in the first half. After the teams traded punts off three-and-out possessions, Blue, kicked back to its own 19, turned the field over with a 53-yard gallop by River Gregory. 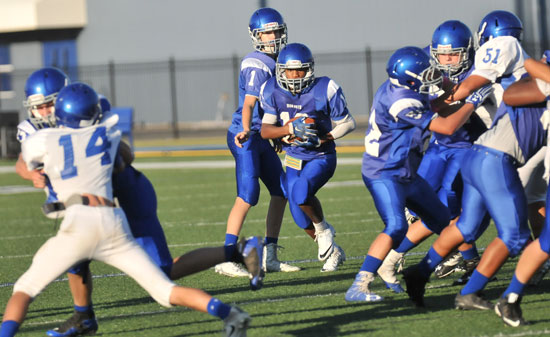 Bryant Blue running back Xavier Foote takes a handoff from quarterback Garrett Wilson as players tangle at the line of scrimmage. (Photo by Kevin Nagle)

But the White defense made a stand. On a third-down play at the 9, Devyn Spurgeon stopped Gregory for a loss of a yard. On fourth down, the White Hornets halted a Gregory run 2 yards short.

They took over on downs. They were penalized back to the 6 and two running plays went backward. Aldrige was nearly tackled for a safety but his forward progress was marked at the 1. 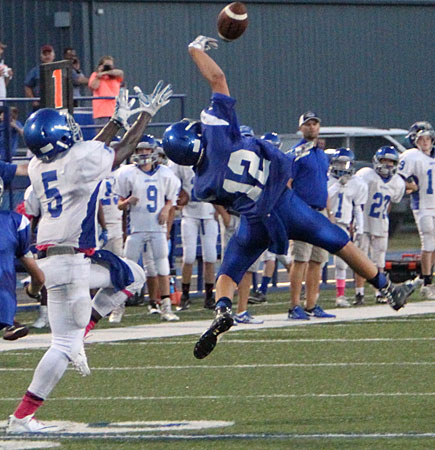 A deep pass from Adams to Ledbetter fell incomplete and White had to punt out of its own end zone. Aldrige’s punt from the back of the end zone went off the side of his foot and out of bounds at the 16.

Blue appeared to be in great shape to take a lead but a holding penalty pushed the ball back to the 21 and, on third down, quarterback Garrett Wilson was sacked by Aldrige.

The Blue Hornets decided to go for it on fourth down only to have Adams intercept at the goal line. Adams started to return the pick but the official near the play ruled it was a touchback. White got the ball at the 20.

Despite a 9-yard pass play from Adams to Aldrige, Bryant White was unable to pick up a first down. And when Aldrige went back to punt, he bobbled a low snap and was tackled by Abram Montoya at the 21. 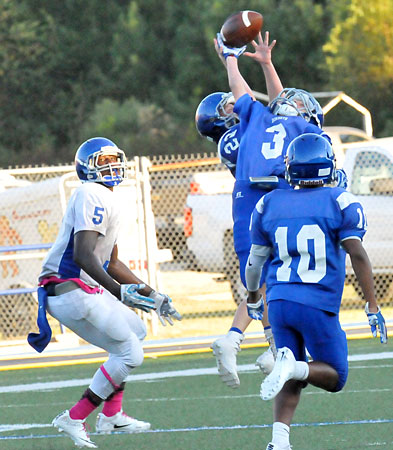 So, once again, Blue had a short field to work with. And this time, they cashed it in. The first touchdown, on a 20-yard run by Wilson was negated by a holding penalty. But Bethel made up the ground. Gregory slashed for 7 yards then Wilson found Hayden Schrader for a 7-yard completion. On fourth down, Bryant White lost track of receiver Ty Bahnks and Wilson got him the ball for a touchdown.

Behind runs of 19 and 17 yards, the White Hornets made a bid to answer before the half was over. With time running out, Adams went deep only to have the Blue Hornets’ Austin Schroeder intercept with :12 left on the clock.

To start the second half, Bryant White got a good kickoff return from Aldrige. Consecutive runs by Ledbetter got the team into Blue territory. But the drive stalled. A fourth-down snap at the Blue 40 resulted in Ledbetter getting sacked by Baker Gray. 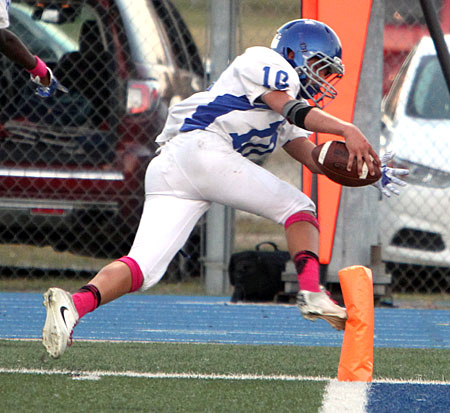 Austin Ledbetter reaches out to get the ball inside the pylon and over the goal line for a touchdown. (Photo by Rick Nation)

Blue took over on downs at its own 47. Wilson broke another apparent touchdown run only to have it wiped out by a holding penalty. With both Gregory and Xavier Foote in the ballgame at running back, flanking Wilson, the Blue Hornets created some tempo and marched to another score in 10 plays.

Foote had a 13-yard run, Gregory converted a third-and-2 with a 5-yard burst. Foote sliced his way for 15 yards to the 25 where a first-down play was spoiled as Jimyle Harris reached Wilson for a loss.

Blue made it up, however, A 7-yard pass from Wilson to Schrader reached the 20 then Gregory lashed for 5 yards and a first down at the 15. Foote took a turn and picked up 8. From the 7, Gregory then nearly scored on the next play. Wilson got it in on a keeper with 1:10 left in the third quarter. 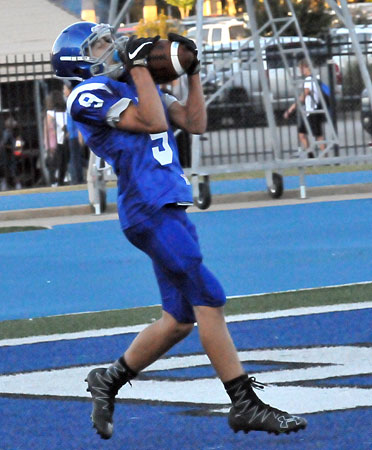 A try for two failed, leaving Bethel on top 12-0. Blue tried an onside kick to keep it away from Aldrige and, perhaps, to try to get the ball right back. But Will Abbot covered it for White.

Aldrige got the drive started with a 26-yard burst. A play later, Ledbetter scored from 17 yards out, just getting inside the left pylon.

The TD gave Bryant White new life. On Bryant Blue’s next possession, a second-down play resulted in a loss of 19 as Gavin Bronson chased down Wilson. Trey Williams broke up a third-down pass and a punt was the result.

With the momentum, White gained possession 42 yards away from a tying score. But the Blue defense rose up and prevented White from making a first down. On a fourth-and-2 at the Blue 34, Ledbetter was stopped short.

So, with 3:05 left, Bethel had the lead and the ball. But the White defense forced a three-and-out. Bronson and Na’shawn Martin each had tackles to help set up a fourth-and-10. 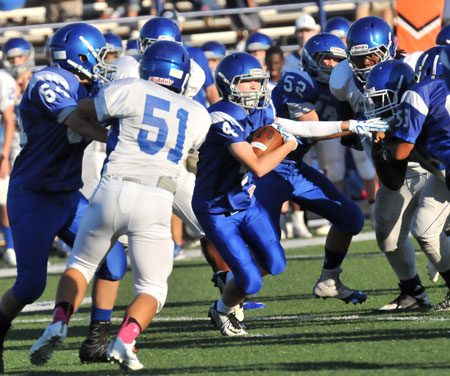 River Gregory (4) laces his way through the defense. (Photo by Kevin Nagle)

Aldrige fielded the punt with designs on a big return but he was stopped early in the return by Schrader at the Blue 49, with 1:44 left in the game.

A pair of face-mask penalties aided the Bryant White cause, one came at the end of a 10-yard scamper by Ledbetter. On the next play, Ledbetter passed to Aldrige for an apparent touchdown only to have it called back due to holding.

Ledbetter scrambled for 17 yards then completed the pass to Adams to get to the 11 with a first down, setting up the tense finish.

Though still trailing the series 6-5, the Blue Hornets’ win was Bethel’s third in the last four years. Now 4-1 on the season, Bryant Blue returns to action on Thursday, Oct. 13, at Russellville.

Bryant White, which fell to 2-3 on the campaign, hosts Maumelle on Tuesday, Oct. 11. 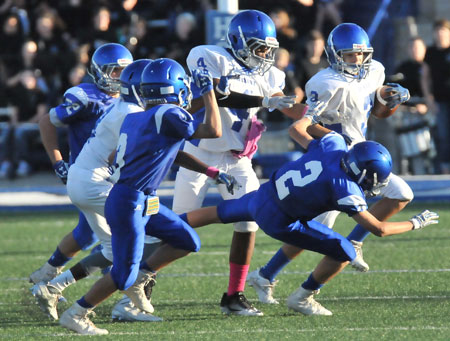 Austin Schroeder (2) tries to bring down Blaine Sears as Connor Coleman (4) tries to clear some room. (Photo by Kevin Nagle) 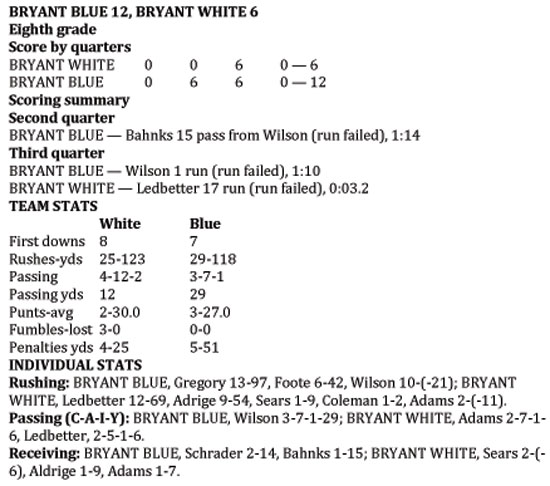