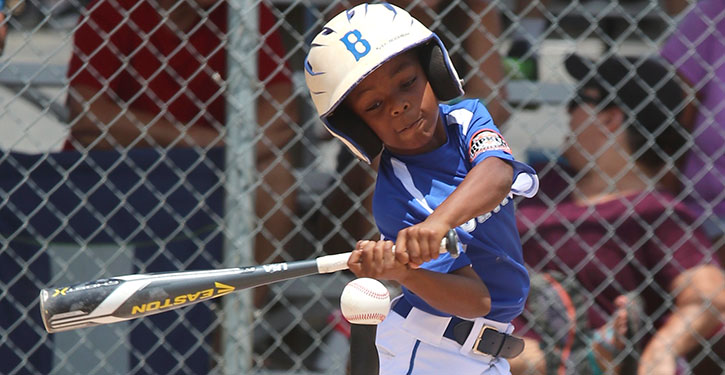 SHERWOOD — The Bryant All-Stars completed pool play at the 2019 Cal Ripken Southwest T-Ball Regional on Friday with a 15-2 romp over the Sylvan Hills Bruins. Bryant finished 2-1 in pool play and because of the threat of inclement weather on Sunday, the bracket portion of the tournament will be played in its entirety on Saturday.

Bryant’s seeding for the bracket will be determined at the completion of pool play games today.

Bryant hammered out 19 hits in the game including two each for Bohanna, Orender, Billins, Danley, Joyner, Kelley and VanHoose.

The team scored six runs, the maximum allowed per inning, in each of the first two to take control of the game.

In the first, Smith got things going with a double to center. Drake and Bohanna followed with singles then Clegg bounced into a force at second to make it 2-0.

Orender beat out an infield hit then Blllins drove a hit into center that allowed both runners to score. Danley ripped a double and Joyner singled in the fifth run of the inning. Kelley’s knock plated Danley to cap the inning.

Sylvan Hills scored a run in the bottom of the first but, with runners at second and third, Bryant got the final out to keep it a five-run lead.

VanHoose started the top of the second with a single. Thompson doubled him home. McGough beat out an infield hit and when Smith grounded into a force at second, Thompson scored.

With two out, Bohanna cracked a double. Clegg followed with an inside-the-park homer that pushed the lead to 11-1.

Orender belted a triple and scored on Billins’ double to make it a max inning.

Bryant’s defense set down Sylvan Hills 1-2-3 in the bottom of the inning and, for good measure, the bats added three more in the third with Danley leading off with an inside-the-park homer on a drive to left. Joyner singled and scored on a double by Kelley. VanHoose’s base hit made it 15-1.

Using a double, a groundout and a single, Sylvan Hills added a run in the bottom of the third but when they couldn’t get any more, the game concluded. With the six-run maximum, there was no way for Sylvan Hills to catch up.