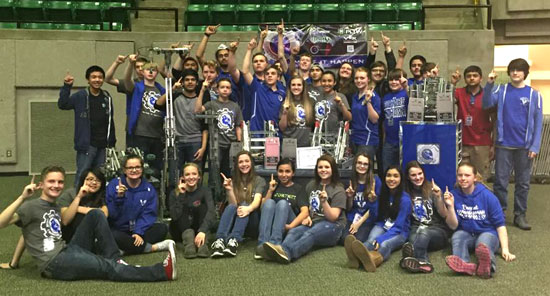 Bryant Hornet Engineering, including five teams (three from Bryant High School and two from middle school), captured all three tournament champion awards in the 2015 VEX Robotics State championship competition. For the third year in a row, Bryant will represent the state at the VEX Robotics World Championship in Louisville, Ky., which includes 400 teams from around the world.

Bryant teams earned the Design Award, the Judges Award and the Robot Skills Challenge Award, while setting new scoring records for the state.

The teams are led by teachers, Jason Price, Debbie Norris and John Williams.

In the qualification rounds of the record 45-team competition, BHS team 5691B earned number one status. With that, 5691W and BMS team 1338B were chosen as its alliance partners.

During the elimination bracket, Bryant set new state scoring records on the way to earning the three tournament champion awards.

To fund the trip to Louisville, the program is accepting donations to enter a drawing for a long weekend at Big Cedar Wilderness Club Resort outside Branson, Mo. The reservation is for June 26-29th in a two-bedroom combined lodge that sleeps eight and has a full kitchen.

“We are requesting a $10 donation for one entry or $50 for six entries,” said Norris. “We will hold our drawing at the Bryant City Council meeting March 31, 2015.