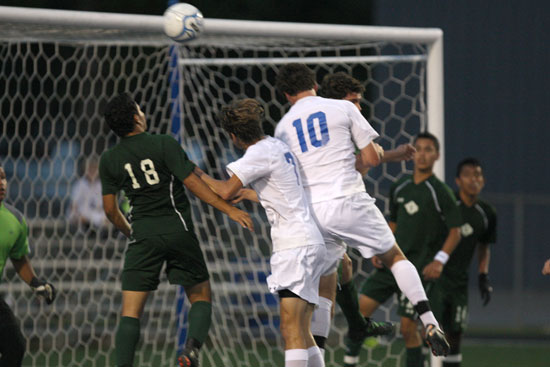 The Bryant Hornets came into Thursday night’s 7A/6A-Central Conference soccer clash with[more] the Van Buren Pointers, one of four teams in a virtual tie for second place with three losses. The Hornets did their part to stay in the bunch with a 4-1 win and now face one huge contest after another starting with Friday night’s home match with Russellville, another of those four teams with three losses entering the night. 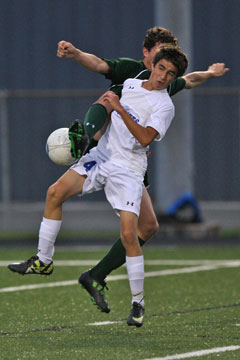 Beyond that, the Hornets have another of the deadlocked teams, Conway, and league-leading Little Rock Catholic coming up in rapid succession next week before they close out the season on May 4 at Cabot.

On Thursday, Van Buren actually scored first in the contest with 11:21 left in the first half. Bryant answered in short order when, at 9:42, Alex Rowlan assisted Bryce Denker on a tying goal.

Before the half was over, the Hornets took the lead. At the 3:12 mark, Ryan Watson found the back of the net off a feed from Forrest Fowler. It was 2-1 at the break.

The Hornets shut out the Pointers in the second half while Denker added his second goal, this time off an assist from Watson with 5:53 left to play. Fowler scored on a penalty kick at the 3:12 mark to cap things off.

“It was an ugly win but a win,” declared Hornets head coach Jason Hay. “We had some guys step up and play with some starters out tonight. Blake Reed, Evan Caddy, and Dylan Wolf came in and gave us some good minutes.

“Still, we must play better to have a chance against Russellville on Friday,” he added.

Earlier this season, the Hornets won at Russellville. It was the first time a Bryant team had defeated a Cyclones squad. 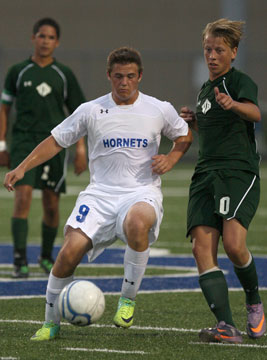 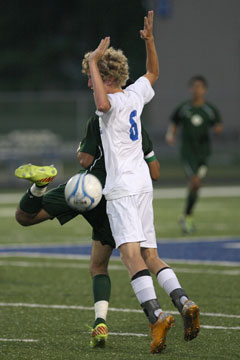