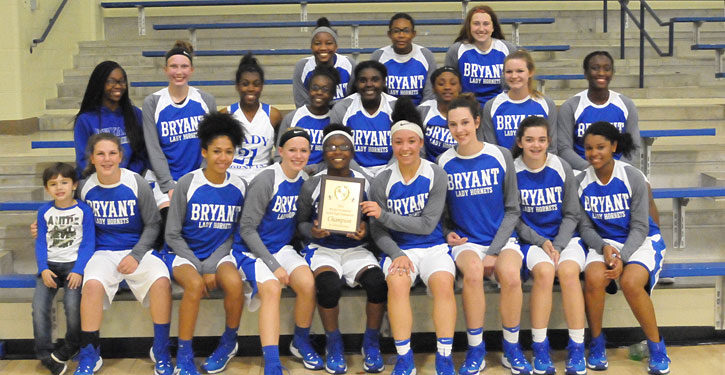 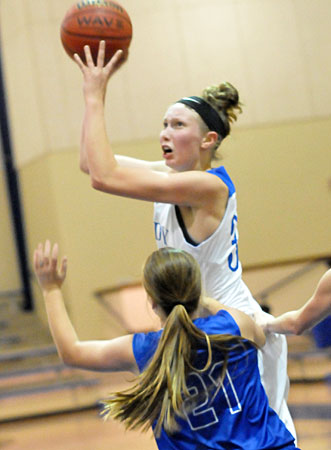 McKenzie Muse fires a shot over a Lakeside defender. (Photo by Kevin Nagle)

Tierra Trotter hit a trio of 3-pointers in the third quarter to spark the Bryant Lady Hornets freshman team to a come-from-behind 31-22 win over the Hot Springs Lakeside Lady Rams Thursday night as they captured the championship of the annual Bryant Invitational Tournament.

It was the sternest test of the season for the Lady Hornets, now 4-0. Lakeside took a cue from Benton on Tuesday night, which used a packed-in zone to slow down the Lady Hornets (despite suffering a 30-7 loss nonetheless). The Lady Rams managed an 8-6 lead by the end of the first quarter then both teams struggled to score in the second quarter. It was 8-7 going into the final seconds of the half when Lakeside hit a 3 with about 10 seconds left to take an 11-7 lead at the half.

“They packed in a zone to take away our post players and tried to make us beat them from the outside,” acknowledged Lady Hornets coach Nathan Castaldi. “We had good possessions the first half. We just could not get a shot to fall. 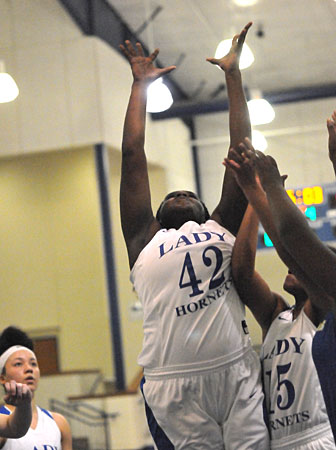 Mekeycia Baker reaches for a rebound. (Photo by Kevin Nagle)

“Our defense kept us in the ballgame the first half,” he noted. “We were able to force some turnovers and made them play at a pace that was more our style.”

The Bryant surge produced a 20-15 lead by the end of the third quarter.

“We moved the ball a little better against their zone in the second half and Tierra got hot,” Castaldi related. “This gave us a little momentum and made them play a little further out on defense. They even got out of their zone and played man and we were able to get some isolation plays for our post players. McKenzie (Muse) had a big basket late in the fourth quarter.”

Trotter finished with 12 points. Ivory Russ added 10 with Muse and Lexi Taylor scoring 4 each. Tyianna Robinson converted a free throw along the way. 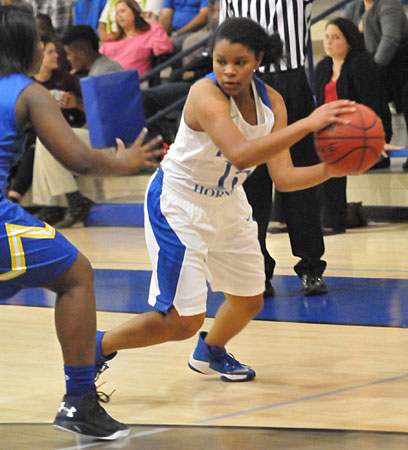 Celena Martin looks to make a pass inside. (Photo by Kevin Nagle)

“Lakeside is a very good team and is going to win a lot of games,” he added. “They would be very competitive in our conference so it was a great test as we get ready to start conference on Monday at Cabot.”

That game will be against Cabot North. 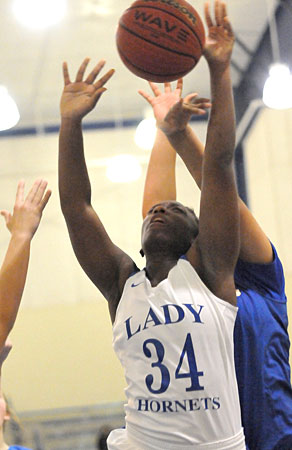 Ivory Russ gets fouled from behind as he puts up a shot inside. (Photo by Kevin Nagle)