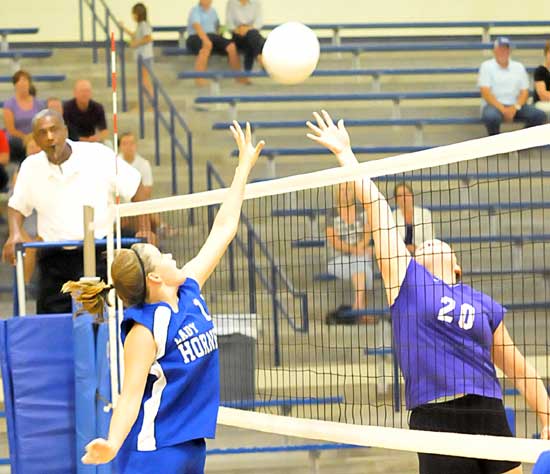 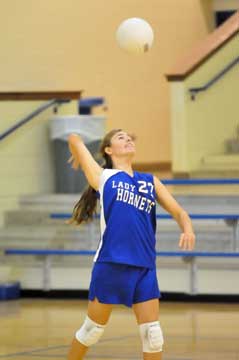 The Lady Hornets face a showdown with arch-rival Benton on the road this Thursday before playing in a tournament in Conway on Saturday.

“Ugly,” declared Lady Hornets coach Monica Parish, “but we won and it counted on our conference record. We really squeaked both games out. We let them hang around too long.

“We were satisfied with ‘free balls’ instead of being aggressive and putting the ball down,” she added. “Our mental mistakes were also numerous — wrong positions, not talking, footwork problems; and net serves — all broke our momentum and led to a back and forth game with too few kills and many more free balls than points.

“I told the girls that we are going to work hard to fix these things in the next two days,” the coach concluded. “These are all fixable problems and by working together as a team, it will get done.”

With Abby Staton serving to start the match, the Lady Hornets jumped out to a 3-0 lead. The play was highlighted by a nice dig from Nikki Clay and a service ace from Staton. Mount broke serve to get on the board and built a 6-3 lead. 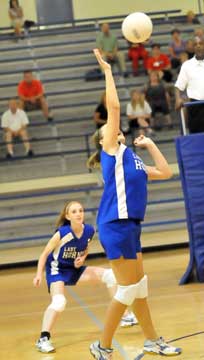 “We had hitting errors and a net violation but then Nikki set for a Mercedes (Dillard) kill that gave us the serve,” Parish noted.

An ace by Dillard helped pull the Lady Hornets even at 6. Later, a kill by Staton off a set by Taylor Lindberg evened it at 9. It was 10-10 when Clay rotated into service. Her ace put the Lady Hornets ahead to stay. Lindberg and Staton combined for another kill as it became 13-10.

The Mounties rallied to within 13-12 before Bryant broke serve and Lindberg started to serve. The resulting surge put the Lady Hornets in control. Lindberg contributed two aces and Rylee Phillips had a kill as the lead grew to 18-12. Staton added an ace late as Bryant closed out the win.

The second game was a seesaw battle that neither team could get control of. With Haley Dellis serving, Bryant turned a 6-6 contest into an 8-6 lead. Clay’s kill off a set by Phillips capped that mini-surge.

The Lady Hornets led 12-11 when Phillips’ kill forced a side-out and Dillard served for the 14th point then they gradually pulled away for the win.