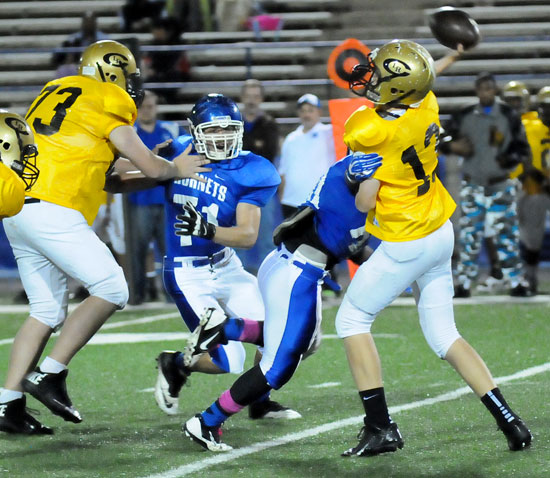 The tide, it appeared, had changed. After striking quickly for a 14-0 lead, the Bryant Hornets freshman team found itself trailed the Little Rock Central Junior Tigers, 28-22, with 4:34 left in the third quarter. The Hornets’ Cameron Coleman had reeled off a 62-yard run to the Central 6. He appeared to be stopped there but no whistle came as no official was within 20 yards of the play. A Central defender wrestled the ball away from Coleman and the Tigers were awarded the football. 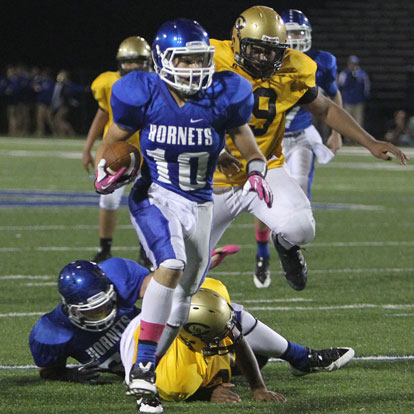 Bryant’s Austin Kelly slips a tackle on his way to a touchdown. Kelly caught seven passes for 173 yards and two scores in Thursday’s win. (Photo by Rick Nation)

The Hornets’ threat to answer back-to-back touchdowns by Central was turned back. It seemed like nothing was going Bryant’s way.

But the Hornets’ defense came on wrenched momentum back to their side with a stand that was punctuated by defensive lineman Chase Fox chasing down Central’s Thomas Downs and tackling him in the end zone for a safety.

The 2 points cut the lead to 28-24 and the Tigers had to kick to the Hornets. A short kick and a nice 23-yard return by Jake East put Bryant 36 yards away from taking the lead.

It took the Hornets six plays. Coleman picked up a first down with a 6-yard run on third down. Beaux Bonvillain then tossed a 13-yard pass to Austin Kelly. Frome the 10, two runs by DeAmonte Terry produced the go-ahead touchdown. 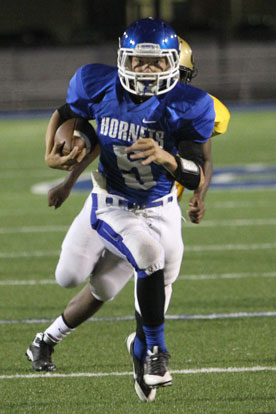 Landon Smith scored on a 19-yard run in the first quarter. (Photo by Rick Nation)

Bryant went on to a 38-28 win to improve to 5-2 overall and 4-2 in the Central Arkansas Junior High Conference.

“We overcome a little bit of adversity right there,” acknowledged Hornets coach Kenny Horn. “These guys are making progress with that. That was big for us. I think two weeks ago, maybe even three weeks ago, I’m not sure we would’ve overcome. But we did tonight. They had us down but our kids responded well and came back.

Coleman rushed for 99 yards on 14 tries after the Hornets struggled early trying to run it.

“We’re small up front, especially our middle three and (Central) is pretty big,” Horn noted. “So, at halftime, we swapped our guards and tackles and that helped a ton. We put some bigger guys on bigger guys. We matched up our kids with their kids and that made all the difference.”

Bonvillain completed 8 of 12 passes for 196 yards and three touchdowns. Kelly caught seven of those throws for 173 of the yards and two of the scores. A 30-yard connection between them overcame a third-and-15 on the opening drive of the game and set up the 23-yard touchdown strike to East.

Chase Kincaid kicked it to 7-0.

Moments later, the Hornets had it back thanks to an interception by linebacker Hayden Knowles who returned it to the Central 33. From there, Coleman slashed for 13 yards and, a play later, Landon Smith, running the read option at quarterback, laced his way 19 yards for a touchdown. Kincaid’s point-after kick made it 14-0 with 2:34 left in the first quarter.

The first of several momentum swings ensued when Thomas Downs returned the kickoff 79 yards for a quick-answer touchdown. Quarterback Josh Cole threw to Kevi Murry for the two-point conversion and it was 14-8. 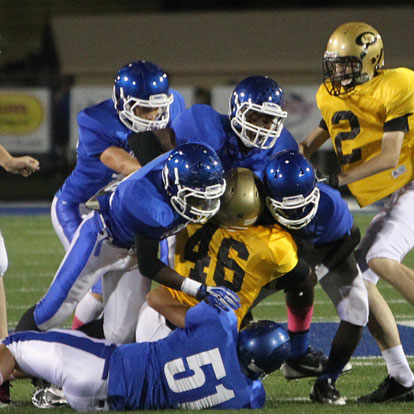 “I feel like if they don’t return that kickoff and we get the ball back and we score again, I think that’s probably the ballgame,” Horn said. “We’ll shut them out and we’ll win handily. But credit their guys. They fought and, in the end, our guys came back and fought too.”

Bryant drove to the Central 17 before running out of downs. Kincaid attempted a 34-yard field goal and had enough leg but his kick was wide.

Central took over but, on the first play, Terry and LaRae Williams forced a fumble that Marvin Moody recovered at the Tigers’ 23.

The Hornets, however, were hit with a pair of penalties then Central’s Terrance Jones intercepted a pass.

The Tigers took advantage, driving for a go-ahead score. The last 55-yards of the 77-yard march came on Cole’s pass to Murry. The drive was nearly stopped while still in Central territory. On a corner blitz, East sacked Cole to put the Tigers in a third-and-14 situation but they were bailed out by a pass interference penalty. The touchdown came a play later tying it at 14. Marlo Thompson ran in the conversion and Central held a 16-14 lead with 2:54 left in the half. 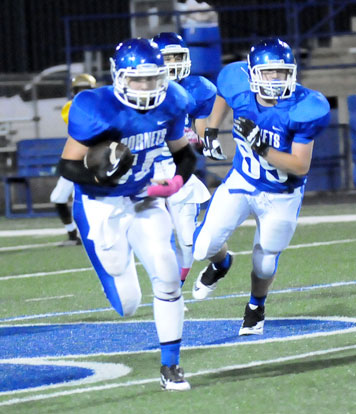 Hayden Knowles heads up field after making an interception. Teammate Chase Fox (89) looks for someone to block. (Photo by Kevin Nagle)

But Bryant wasn’t done. Keyed by a 35-yard pass play from Bonvillain to Kelly and, despite a holding penalty that pushed them back, the Hornets scored with 1:03 left. Back-to-back tunnel screens to Kelly produced 23 yards then 21 yards for the TD.

Smith ran in the conversion and Bryant held a 22-16 edge at the half, which ended with a sack of Cole by Moody and Nathan Mayes.

To open the second half, the Tigers put together a 60-yard drive for points. Cole’s pass to Thomas Walker from 10 yards out garnered the points but the Hornets stopped big fullback Malie Onwumere short on the conversion and it was tied 22-22.

On the ensuing kickoff, Walker miss-hit the kick and squibbed one for what turned out to be a successful (if unintentional) onside kick. Terry Humphrey recovered for the Tigers after the Hornets were slow to pounce on it.

“That was my fault,” Horn stated. “I was standing right there and I didn’t think it was going 10 yards. I yelled to our kids, ‘Don’t touch it.’ I’ll be danged if it didn’t turn over two more times.”

On the very first play of the possession, the Tigers scored to take the lead. A halfback pass by Thompson was hauled in by Murry for a 48-yard touchdown.

After the Hornets had taken the lead, Central drove from its own 29 to near midfield but Phillip Isom-Green broke up a long pass on third-and-6 then Madre Dixon lowered the boom on Murry as he juggled a fourth-down pass. The ball fell incomplete and the Hornets took over.

Two plays later, Bryant put the game out of reach with another tunnel screen from Bonvillain to Kelly, who was sprung for the touchdown by a nice block from center Joseph Small. Kincaid’s extra point made it 38-28 with 4:22 left.

Central’s last stab at scoring reached the Bryant 48 but, on a fourth-down play there, Thompson was not only stopped but resulted in a fumble that Williams recovered with 1:24 left to play.

Bryant returns to action at home on Thursday, Oct. 24, against Cabot South.

BRYANT — Fox tackles Downs in the endzone for safety, 2:39 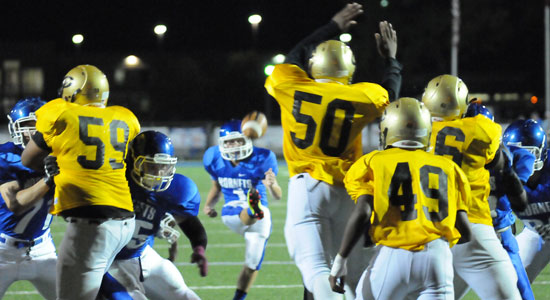