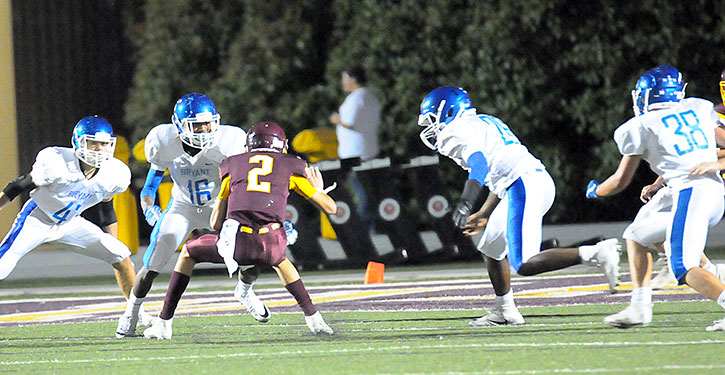 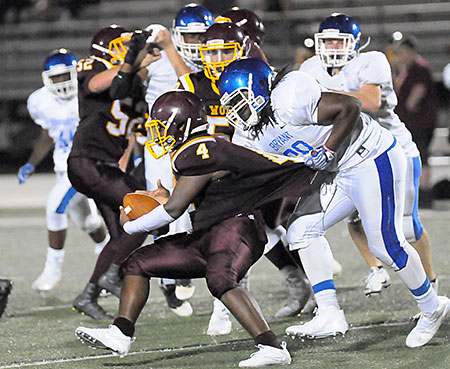 PEARCY — The Bryant Hornets freshman team scored on each of its first six possessions as they overwhelmed the Lake Hamilton Wolves freshmen, 45-6, in their Central Arkansas Junior High Conference contest on Thursday night.

It was the 20th consecutive win by Bryant freshman teams dating back to the third week of the 2015 season. Lake Hamilton was the last team to beat the Hornets.

The Hornets produced a pair of touchdown drives that included just one play, another that took two plays and one that required three.

In fact, with reserves playing most of the second half, the Hornets actually scored twice on their seventh possession but TD runs by Jalun Davis then Khylon Rawls were both called back by the only two penalties the Hornets were cited for in the entire contest. 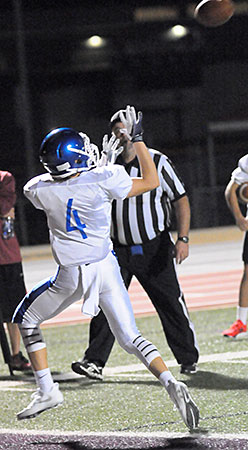 River Gregory looks in a pass from Hart Penfield on an impromptu two-point conversion. (Photo by Kevin Nagle)

By then the Sportsmanship or Mercy rule was in effect. Bryant’s reserves used up all eight minutes of the fourth quarter.

Lake Hamilton opened the game with its lone sustained drive of the night, driving from their 35 to Bryant’s 12. Passes from quarterback J.T. Bardwell to Layne Warrick for 29 yards and to Izaiah Clenney for 16, each converted third-down plays.

At the 12, however, Bryant’s Alec Purdom made back-to-back stops for losses. That set up a fourth-and-17 at the 20. Bardwell, pressured by the Hornets, threw incomplete and Bryant took over.

On the Hornets second play on offense, quarterback Austin Ledbetter found Hayden Schrader for a 53-yard gain, setting up Xavier Foote’s 7-yard touchdown run to get the Hornets on the board. Ledbetter ran in the two-point conversion to make it 8-0.

Lake Hamilton’s only touchdown came on the first play of the subsequent series. Warrick, on a straight dive, pierced the Hornet defense for a 65-yard TD.

After that, however, the Wolves only managed a net total offense of 44 yards. They had 154 for the game to Bryant’s 317. 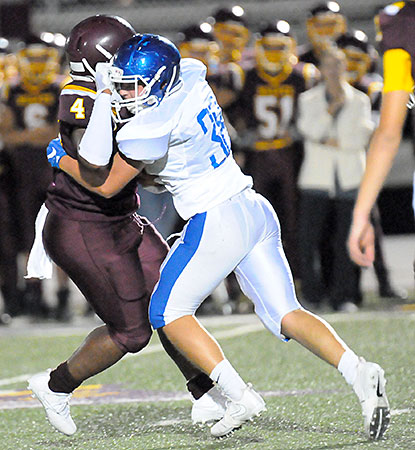 One of Bryant’s two longest scoring drives of the night followed. The six-play march started at the Lake Hamilton 48 thanks to a good return by Hart Penfield on the kickoff. Ledbetter had runs of 11 and 26 yards to set up River Gregory’s 8 yard dash to the end zone. Foote ran in the conversion to make it 16-6 going into the second quarter.

Brock Funk’s deep kickoff was covered so well by the Hornets that Connor Coleman tackled return man Carson Harris at the 4. Three plays later, the Wolves were punting and Bryant was back on offense with more great field position.

On the first play, Ledbetter fired a pass to Gregory that broke for 51 yards and another score. Funk kicked the extra point and it was 23-6.

After another Lake Hamilton punt gave Bryant the ball at the Wolves’ 39, Ledbetter laced his way for a touchdown on a first-down keeper. Funk kicked it to 30-6 with 3:52 left in the half. 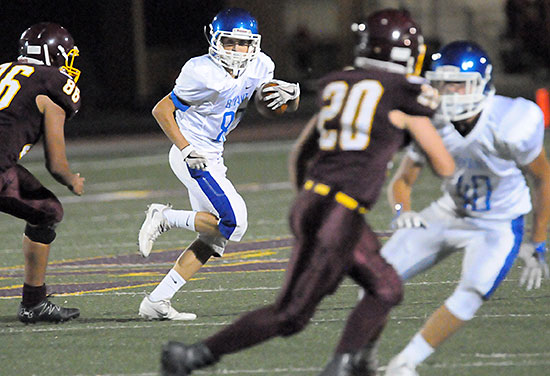 In turn, the Wolves were able to pick up a pair of first downs and reach the Bryant 41 with time running out. Three passes fell incomplete with the second, a deep try, was broken up by Garrett Wilson.

The Hornets got the ball to start the second half and Foote started things off with a 38-yard jaunt that ended with a “horse collar” tackle that cost Lake Hamilton another 10.

Three plays later, however, Bryant faced a fourth-and-6 at the 16. Ledbetter found Penfield for 10 yards to keep the drive alive. That would be the quarterback’s final pass of the night. He was 3 of 7 for 114 yards. He also ran for a team-high 80 yards on five tries. 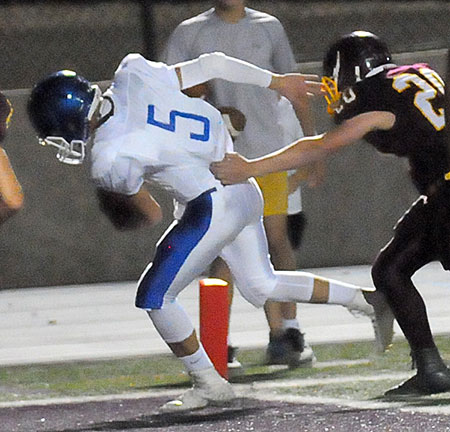 Quarterback Austin Ledbetter (5) finishes off a touchdown run by evading a Lake Hamilton defender at the goal line. (Photo by Kevin Nagle)

Foote followed that throw and catch with a 6-yard TD run and Funk’s kick made it 37-6 with 6:09 left in the third quarter.

The defense forced another Lake Hamilton punt but the snap sailed over the head of punter Chase Berry, who covered the loose ball at the Wolves’ 8. Davis’ first carry got half of the 8. Wilson, in at quarterback, carried the rest of it.

On the extra point, a bad snap was scooped up by Penfield, the holder. He rolled to his right and tossed a pass to Gregory for a two-point conversion and the 45-6 lead.

With that, the mercy rule (running clock) went into effect in the fourth quarter. Lake Hamilton used the final 3:12 of the third period. A 24-yard  run by Carlos Brewer gave them hope but Bryant’s Jimyle Harris dropped Brewer for a loss on the next snap. A play later, Baker Gray cut down Miller for another loss. 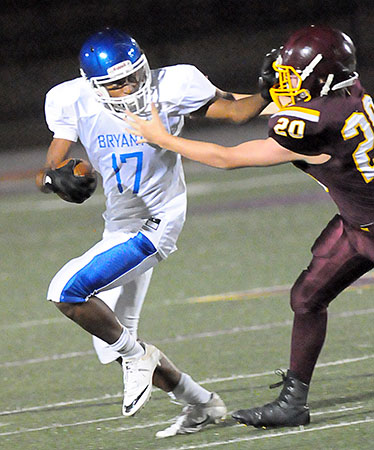 Amari Coats (17) tries to get around Lake Hamilton’s Izaiah Clenney on a kickoff return. (Photo by Kevin Nagle)

The Wolves went for it on fourth-and-11 from their own 43. Bardwell tried to get a pass away but the Hornets’ rush got close enough  to him for his arm to be hit as he released the pass, which fell incomplete. That was Lake Hamilton’s final play on offense in the game as the third quarter ended.

Davis had runs of 11 and 21 yards on Bryant’s clock-sapping final possession.

Now 3-0 on the season and 2-0 in conference play, the Hornets will play their first game at home next Thursday against one of their toughest competitors, North Little Rock. 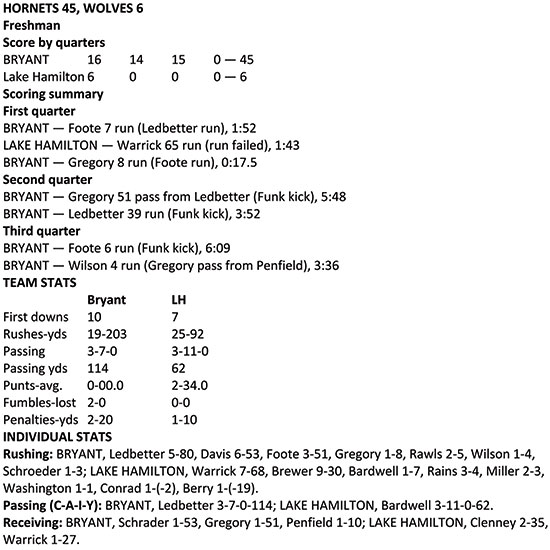