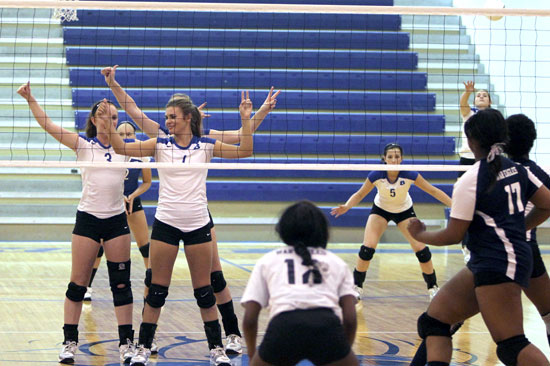 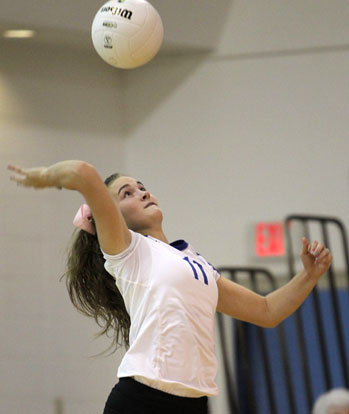 The win evened the Lady Hornets’ league mark at 1-1 going into the Volley N The Valley tournament at Russellville on Saturday. Bryant returns to conference action on Tuesday, Sept. 17, at Sheridan.

Nikki Clay was 13 of 13 on her serves with 3 aces, while Mercedes Dillard got in all 10 of her serves including five aces. Kendall Selig finished with five aces as well with 15 good serves in 17 attempts.

Allie Anderson had three aces to go with a team-high six kills. Dillard pitched in with four kills. Sierra Jones and Emily Henson had two each. Setter Britney Sahlmann finished with 13 assists, four digs, two and a half blocks, a kill and an ace. Whitney Brown finished with four digs as well.

“Our girls had a great night,” said Bryant head coach Beth Solomon. “We had a good serving night but, at the same time, we still missed too many serves.”
Overall, the Lady Hornets were good on 87 percent of their serves.

“I like that our girls were aggressive with their serves,” Solomon stated. “I thought that, overall, all of our girls stood out tonight. Nearly all of them played better.”

Solomon pointed to a productive practice on Wednesday as part of the reason for her team’s success on Thursday.

“We really focused on our serve-receive and our communication on the floor,” she related. “Two things that we really seemed to have some issues with last Saturday at Spikefest. We had a great practice, quite possibly one of the best if not the best we’ve had this season.

“Tonight the girls put that serve-receive and communication into play on the court and did a great job of playing up and staying consistent,” the coach said. “We were able to put in some of our JV girls, which is when the point spread shrunk a little, but they were capable of pulling together and pulling out the win against a conference varsity team.” 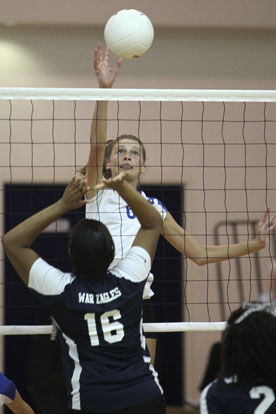 Allie Anderson (6) pounds one of her team-high six kills. (Photo by Rick Nation)