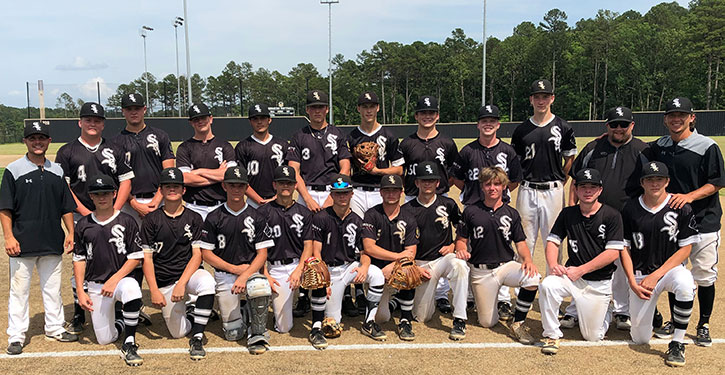 LITTLE ROCK — With another pitching gem, this time from Blaine Sears with relief help from Tyler Bates and Hayden Thompson, the Bryant Black Sox Junior American Legion team captured the championship of the 16U Five Tools Showcase Tournament with a 5-0 win over the Arkansas Prospects-Fullerton, bases in Sherwood on Sunday at Joe T. Robinson High School.

The Sox improved to 9-1 on the season including a sweep of their five outings in the tournament, in which they surrendered a total of just nine runs.

Over five innings, Sears scattered six hits, with one walk and one strikeout, and kept the Prospects off the board despite a pair of errors behind him.

Bates worked around a lead-off walk in the sixth then Thompson pitched through an infield hit and a one-out walk to finish the shutout.

The Sox only managed six hits, with two by Noah Davis, but they scratched out single runs in the third and fourth then took control of the game with three in the fifth.

“The pitching is not what I expected it to be,” stated Sox manager Ozzie Hurt. “These guys are good. I’m talking about top to bottom. When we have Peyton (Dillon), it’s Peyton, (Will) Hathcote, Sears, Bates, (Josh) Turner — everyone. I don’t know that we’ve had a bad outing this season. Logan White, when we lost to Mountain Home in last week’s (Cabot Tournament) championship, he competed, and he hadn’t started a game in over a year. He goes 50 pitchers and did well.

It was the Sox’ third shutout of the season.

“I told (Sears) yesterday that he was going to start today,” Hurt related. “He was like, ‘Okay, well I just need to throw a bullpen.’ We get here today, and Peyton threw the first game and we took him out in time to maybe bring him back in this game.

“And I was talking to Blaine before the game and I was asking when the last time he started a game was, other than last Tuesday and he said, ‘I’m not a starter. I come out of the pen.’ I thought he started all season last year,” the manager continued.

“Again, if they go more than 50 pitches, they’re lights out,” he mentioned. “Again, we had a starter go and not hit a wall. That’s huge. And that happened every game in this tournament.”

The staff is so deep that Thompson was the only one who pitched twice in the tournament, both one-inning relief stints on Sunday.

“And we didn’t even have to,” Hurt asserted. “It was just one of those deals where he looked good earlier and we wanted to see him again, so we threw him out there.”

Bryant’s third-inning run was a result of a walk to Lawson Speer, a single by Davis and, with one out, an RBI knock by Ryan Riggs.

In the fourth, Dakota Clay shot one that ricocheted off the Prospects pitcher and into the outfield for a single. Sears sacrificed him to second the Speer hit a chopper to deep short, which he beat out for a hit. And, when the throw to first was errant, Speer sprinted home to make it 2-0.

The fifth began with a double to the gap in right-center by J.T. Parker. Big Will Hathcote followed. He had been robbed of extra bases in the first when, with the sacks full, he whacked a rising liner to right that nearly got over the right-fielder’s head. He had to reach high to haul it down to end the inning.

This time, Hathcote got a perfect bunt towards third in an attempt to move Parker up a base. As it turned out, not one could field it and he crossed the bag with a bunt single.

“Bunting is one thing we haven’t been able to (practice),” said Hurt. “Yesterday in our little meeting, we talked about bunting. In the first game today, we laid down three perfect bunts and, in this game, we laid one down. I mean, who would’ve ever thought that Will Hathcote’s first base hit of the season would be a bunt. But he did it.”

Though Hathcote was retired at second on force as Bates grounded to short, Parker scored to make it 3-0. Clay walked then, after a pitching change, Sears hit a grounder to second. Trying to get a force at second, the throw to the shortstop got away and all hands were safe including Bates, who scored.

A wild pitch got Clay to third as Speer drew a walk. Davis followed up with a sacrifice fly to left to cap the scoring.

Sears had worked around a single and an error in the first with the help of a 6-4-3 doubleplay. After a 1-2-3 second, he issued a walk to lead off the third. A sacrifice bunt attempt was popped up and catch by Riggs, the Sox’ catcher. A grounder to short forced the runner at first but an errant relay to first allowed the runner to reach second. Sears, however, got the third out on a comebacker.

In the fourth, a pair of infield hits occurred but, between them, Sears picked a runner off of first. With two away, Davis made a tremendous play at short with Hathcote digging up a throw in the dirt to retire the side.

A one-out single in the fifth gave the Prospects hope. The next batter blooped one to shallow center that fell in front of Speer, the centerfielder, and Davis coming out from short. But Speer got the ball quickly into second for a force out.

Another single and an infield hit loaded the bases with two down, but Sears induced a grounder to Dillon at third for the final out.

“This tournament was like, basically, the best teams around, showcase teams, and you had to qualify for (a bigger showcase) in Fayetteville in a couple of weeks,” Hurt mentioned. “So, this tournament was a qualifier. It meant a lot to (the other teams).”

The Sox return to action at home against Sheridan on Monday, June 10. 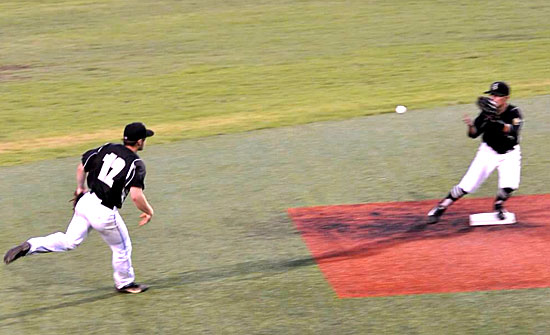