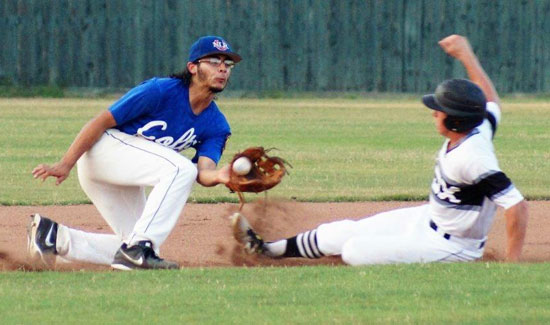 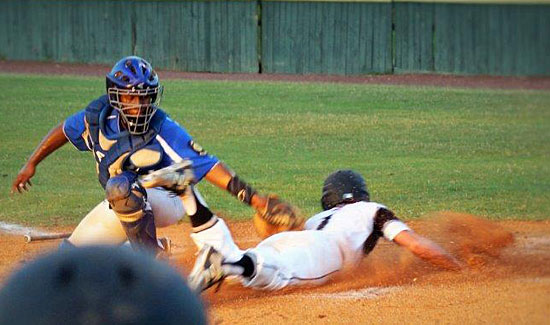 Though the North Little Rock Colts had batters on base in six of the seven innings of Wednesday night’s Senior American Legion game against the Bryant Black Sox at Bryant High School Field, only one of them scored. Right-hander Aaron Orender and, in the seventh, Seth Tucker limited the damage while the Sox’ hitters gradually built a lead on the way to a 9-1 victory.

Bryant improved to 10-2-1 on the season. It was just the Sox’ second game at home so far. They’re set to play number three tonight against Russellville, then head to Memphis for the annual Keith Hagan Memorial All-American Classic (The Hagan). 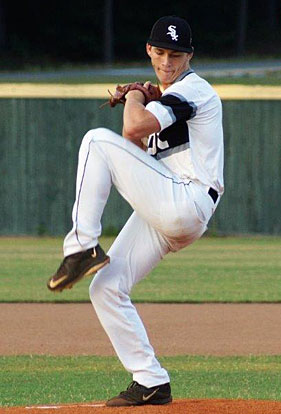 Jake East had two hits for Bryant. He and Garrett Misenheimer each smacked triples while Dylan Hurt contributed a double to the team’s nine-hit attack. Lead-off man Logan Allen was on base three times and scored each time.

Over six innings, Orender scattered five hits without a walk, though he hit three batters. He struck out four. Tucker pitched the seventh and fanned two. A pair of walks and an infield hit filled the bases for the Colts but the side-winding righty got Christian Goshen to pop to East at short to end the game.

Goshen, a Missouri Southern signee, started the game on the mound for North Little Rock. At the plate, he was 3 for 3 going into that last at-bat.

The opening frame was typical of the night for Orender. Julian Gonzalez singled then Desmond Cordova struck out. Goshen singled but Chance Harger fanned. Lawson Dulin bounced into a force at second so the Colts stranded two.

They wound up leaving eight on and have another pair of runners picked off.

Bryant took advantage of its first chance to score though a potential second run was tagged out at the plate.

Allen singled to lead it off. A wild pitch got him to second. He stayed there as Hurt’s grounder to short resulted in a throw to first that pulled Dulin off the bag. Both runners moved up on Misenheimer’s grounder to first. Allen scored on a passed ball as Jordan Gentry worked a walk.

With runners at the corners, the Sox tried to squeeze in the second run. Orender got the bunt down and Hurt raced toward the plate but Goshen made a tough play, fielding the bunt and tossing it from his glove to Cordova, his catcher, just in time for the tag as Hurt tried to slide around it.

Orender’s only 1-2-3 inning came in the second. He needed just seven pitches to dismiss the Colts. In turn, Goshen worked around a one-out error. 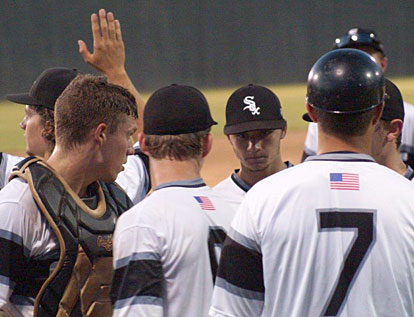 North Little Rock tied the game in the top of the third when Cordova singled with two down and raced home on Goshen’s double to center. A wild pitch got Goshen to third then Harger was hit by a pitch. But Goshen was picked off third to end the uprising.

And the Sox regained the upper hand in the home third. Hurt and Misenheimer each walked and Gentry beat out a bunt for a hit. With one out, East grounded into a force at second, beating the relay to first and avoiding the inning-ending doubleplay as Hurt scored to make it 2-1.

East stole second and Joey Cates walked. Hunter Oglesby made a bid for a hit but his liner was speared at second by Gonzalez to end the inning.

Orender struck Dulin on a 1-2 pitch to start the fourth but the next three were retired.

With one out in Bryant’s fourth, Allen was plunked on a 3-2 delivery. He took second on a wild pitch and stole third before trotting home on Misenheimer’s opposite-field drive to the base of the fence for an RBI triple.

Goshen gave way to Harger at that point but the new hurler was greeted by Gentry’s RBI single, making it 4-1.

North Little Rock’s nine-hole hitter, Jalani Willis was drilled on a 3-2 pitch to start the fifth. An errant pickoff throw allowed him to take second but he was thrown out at third by Orender moments later when Willis took off too soon on a steal attempt.

Gonzalez popped to Scott Schmidt at second then Cordova grounded out to East to get the Sox back in the dugout.

A four-run home fifth blew the game up. East singled to rev things up. Cates walked and Tucker got a bunt down that he was able to beat out for a hit as no one covered first.

Harger walked Schmidt to force in a run though Cates was forced out moments later when Allen hit a two-hopper to Benny Clinton at short. That brought up Hurt, who yanked one just inside the bag at third and into the left-field corner for a two-run double. Allen scored on a wild pitch as Misenheimer worked a walk.

Goshen started the sixth with a double but go no further than second as Orender finished up by setting down the next three on a check-swing pop, a strikeout and a fly to Allen in center.

East cracked his triple with one out in the bottom of the sixth. It might’ve gone for an inside-the-park homer but he pulled up at third. The relay throw got away, however, and he scored on the play anyway.

Tucker issued a walk to open the seventh but fanned the next two. He was a strike away from ending the game but Gonzalez drew a walk. Cordova followed with a chopper that ticked off the top of Tucker’s glove as he tried to leap up and grab it. East got to the ball but Cordova beat the throw to first, loading the bases for Goshen. Tucker jammed Goshen and the game ended on the pop to East. 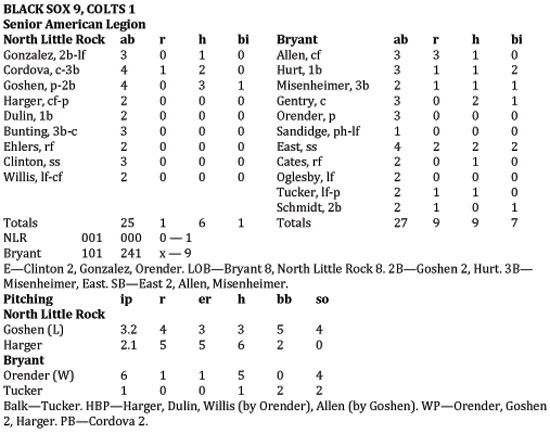