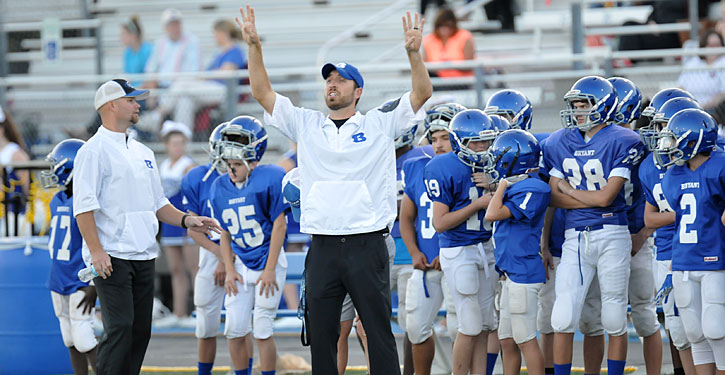 Bryant White closes out season with convincing win over Benton 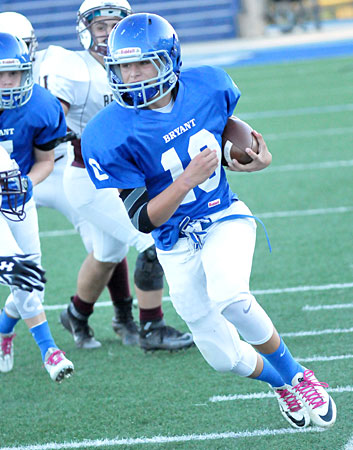 Austin Ledbetter threw touchdown passes late in the first half and early in the second half as the Bryant White Hornets eighth grade team of Bryant Middle School snapped an 8-8 tie and pulled away from the Benton Panthers eighth grade team Tuesday night. The Hornets built a 28-8 lead on the way to a 28-16 victory to complete their 2016 season.

Like Bryant Blue of Bethel Middle School, Bryant White finished the season 5-3. It was the White team’s third consecutive victory since their heartbreaking 12-6 loss to Blue on Oct. 6.

Ledbetter also rushed for a touchdown to go with his two TD passes. He rushed 11 times for 77 yards and went 7 for 7 passing for 118 yards. Myles Aldrige rushed for 62 yards on eight carries with a touchdown. He also caught five of those Ledbetter passes from Ledbetter for 86 yards and a touchdown.

The Hornets only had five possessions in the game including a two-play series to run out the clock at the end. The other four went for touchdowns. 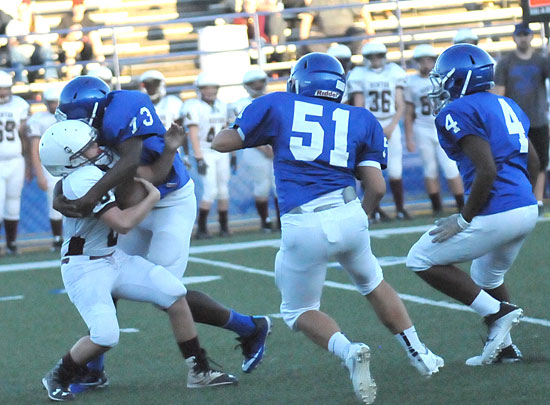 Meanwhile, the Hornets’ defense held Benton to 180 yards of total offense and 69 of that came on a late touchdown run by Tavion Akins.

The only punt of the game came at the end of Benton’s game-opening series. A pair of penalties undermined the Panthers. Bryant’s Luke Blacklaw made a tackle of no gain and Gavin Bronson sacked quarterback Garrett Brown. 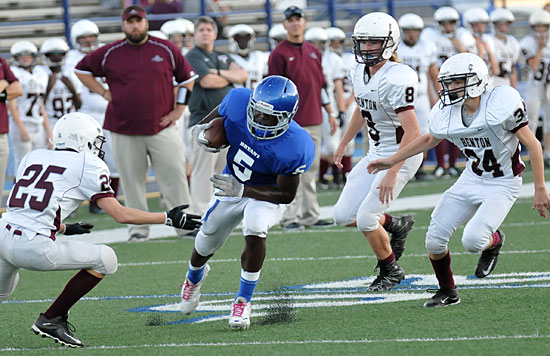 The Hornets started their opening possession at their own 35. They drove to the Benton 18 on the running of Ledbetter, Aldrige and Connor Coleman. A penalty put them in a third-and-11 hole at the 23. Ledbetter swung a pass to Aldrige who turned up field for a first down. Another completion between that duo got the ball to the 6.

Ledbetter’s completion to Blaine Sears covered the final 6 yards for the touchdown.

A two-point run by Ledbetter made it 8-0.

Benton got good field position thanks to a good kickoff return by Trever Standridge. The Panthers drove to the Bryant 1. On first down there, Alec Purdom led a charge to stop Akin with no gain. The next snap, Aldrige stopped Michael Jefferson cold. 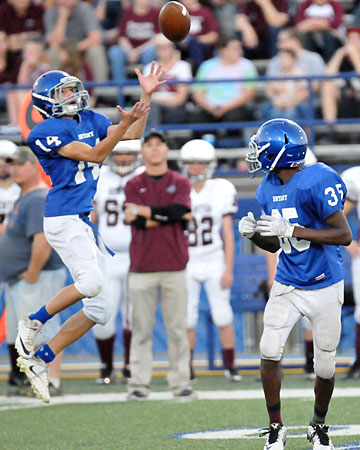 Devyn Spurgeon (14) leaps up to field an onside kick as teammate La’Quav Brumfield (35) looks back. (Photo by Kevin Nagle)

On a third-down try, however, Brown just got over the goal line for the touchdown. And, when Akins ran in the conversion, it was 8-8 with just 3:23 left in the half.

The Hornets not only covered an onside kick but Devyn Spurgeon grabbed the loose ball and ran it to the Bryant 48.

Moments later, they faced a fourth-and-3. Aldrige found a seam and slashed 20 yards to keep the drive alive. Though a touchdown pass to Sears was wiped out by a penalty.

Aldrige grabbed a pass for 14 yards to the 16 then hauled in another for 10 yards and a first-and-goal. Sears wound up getting the touchdown anyway on a 6-yard toss from Ledbetter.

Out of the “swinging gate” formation, Ledbetter threw to Aldrige for the two-point conversion to make it 16-8 with 1:27 left in the half.

To start the second half, Spurgeon grabbed the onside kick again and took it to the Panthers’ 44. Aldrige picked up a first down with a 12-yard run but two plays later, the Hornets faced a third-and-13 at the 35. 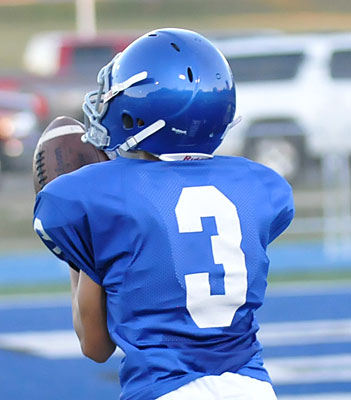 Once more, Ledbetter found Aldrige for the touchdown, making it 22-8. Ledbetter’s run to try to get a two-point conversion was stopped by Benton’s tackle machine Gavin Davis.

It looked like the Panthers were headed for an answering score after driving from their own 34 to the Bryant 6. Runs by Michael Jefferson and Coats got them there.

On a second-and-goal at the 6, Coats got another try but Jimyle Harris cracked him. The ball came loose and Purdom covered for the Hornets with 2:02 left in the third quarter.

From the 11 then, the Hornets put together one of their most impressive drives of the season, marching 89 yards in 11 plays to a game-clinching score. The key play was a 17-yard run by Ledbetter to convert a fourth-down. Two plays later, he kept on a 14-yard touchdown run with 2:43 left.

A swing pass from Ledbetter to Aiden Adams was stopped at the goal line, but it was 28-8.

A play into the next possession, Jefferson galloped to paydirt. Akins ran in the conversion to set the final score. 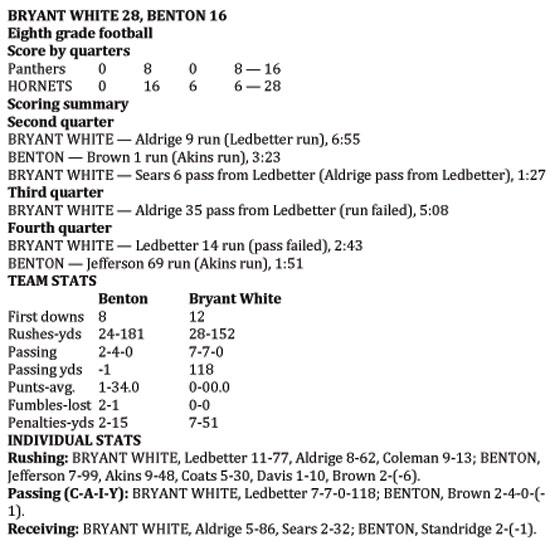 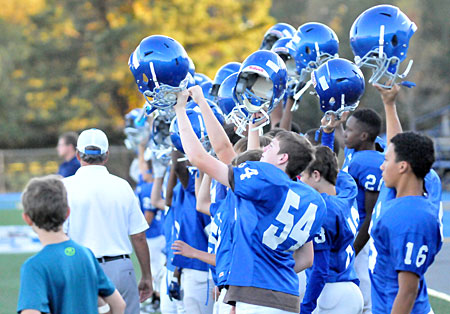