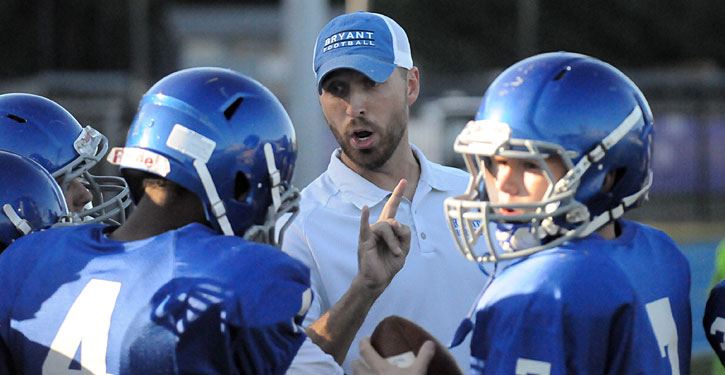 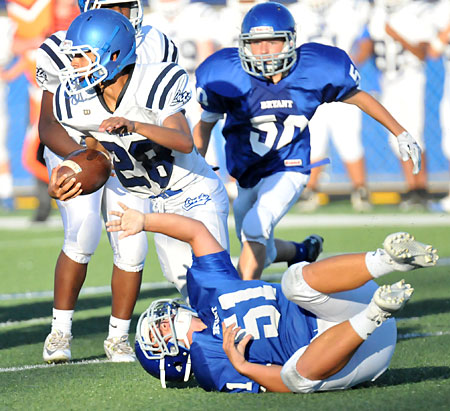 Of the 14 minutes in the first half, the Bryant White Hornets eighth grade team of Bryant Middle School possessed the ball just 2:38. That means the Conway Blue Wampus Cats had it for 11:22.

The Hornets dominated possession time in the third quarter and increased the lead to 26-0 before head coach Josh Fonville worked to get everybody into the game. Conway Blue scored twice in the fourth quarter, including a touchdown as time ran out but fell far short of catching the Hornets in a 26-12 final.

The win improved Bryant White to 2-2 going into next Thursday’s Hornet Bowl in which they take on the Bryant Blue Hornets of Bethel Middle School at Bryant Stadium.

Myles Aldrige rushed for 107 yards and two touchdowns on just six carries for Bryant White against Conway Blue. Austin Ledbetter caught a touchdown pass from Aiden Adams and threw one to Blaine Sears. 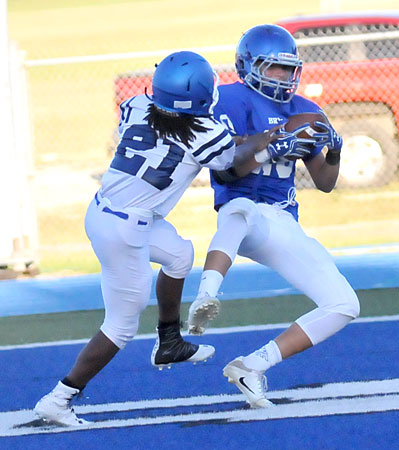 Austin Ledbetter (10) hauls in a touchdown pass despite the efforts of Conway Blue’s Donovan Nooner. (Photo by Kevin Nagle)

Meanwhile, Conway Blue netted just 20 yards of total offense on 19 snaps through three quarters. Of those 19 snaps, the Hornets dropped the Cats for losses eight times.

In the fourth quarter, Conway Blue piled up 135 yards on 10 plays.

To open the game, the Cats drove from their own 46 to the Bryant 31. They overcame one lost-yardage play but, on a second-and-9 at the 32, Ledbetter dropped Donovan Nooner for a loss of 2.

The Cats’ Isaiah Duncan picked up 3 yards on third down, setting up a fourth-and-8. They went for it only to have Aldrige cut down quarterback Michael Hardaway for a loss of 7.

The Hornets took over on their own 39. Aldrige took a handoff on the first play from there and breaking three tackles along the way, sailed 61 yards for a touchdown.

So, Conway had run eight plays and was denied. Bryant ran one and scored. 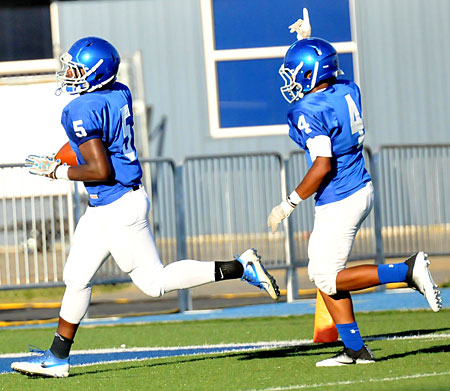 The Cats picked up where they left off on the next series. But they got a raw deal along the way. Two rushes produced a first down as the first quarter ended. Conway had reached its 45. But when play resumed to start the second quarter, the officials marked the ball at the 35.

They drove to midfield anyway but, a second-down run by Duncan was stopped for a loss by Nashawn Martin and Chance Clendening. On third down, a bad snap undermined the play. Hardaway gathered the ball in and tried to make a play only to have Bryant’s Daniel Dellorto bring him down for a loss of 14.

A short punt set up Bryant’s second score, though two plays in, the Hornets faced a third-and-11. But Adams and Ledbetter combined on a 25-yard completion to keep the drive going. 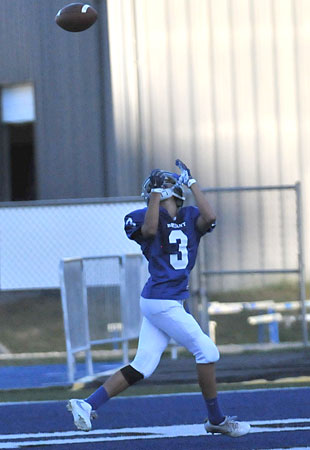 Blaine Sears prepares to catch a pass for a touchdown. (Photo by Kevin Nagle)

Two plays later, they faced a third-and-4 at the Cats’ 23. Aldrige converted with a 10-yard run. After Ledbetter, running at quarterback, got nothing on first down, he returned to receiver and Adams found him for a touchdown with just 30 seconds left in the half.

The opening possession of the second half was keyed by Ledbetter’s 17-yard run. Two plays later, he started to run to the left on a quarterback keeper then pulled up to toss a 19-yard touchdown pass to Sears. Ledbetter ran for the two-point conversion and it was 20-0.

In turn, Conway Blue lost yardage on all three of their plays in the subsequent series. Twice, Bryant’s Christian Del Castillo made tackles during the possession.

Another short punt left the Hornets 41 yards away from more points. Connor Coleman took a pitch and pounded 19 yards to get the drive going. Ledbetter then passed to Adams for 9 yards.

Despite a holding penalty that pushed them back, the Hornets scored when Aldrige laced his way through the defense on a 19-yard run, making it 26-0. 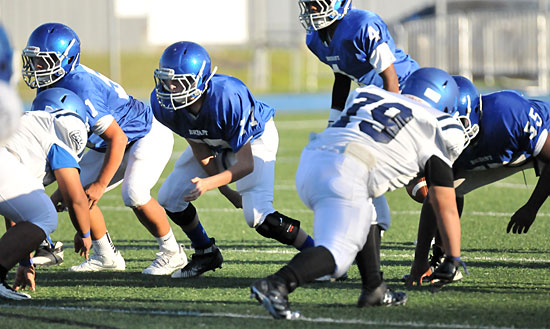 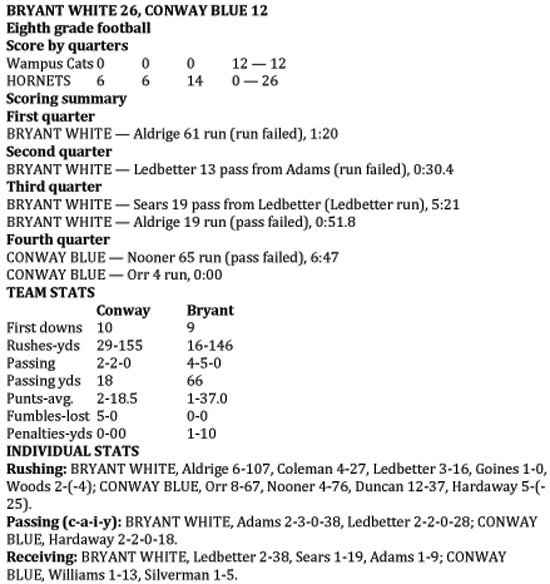