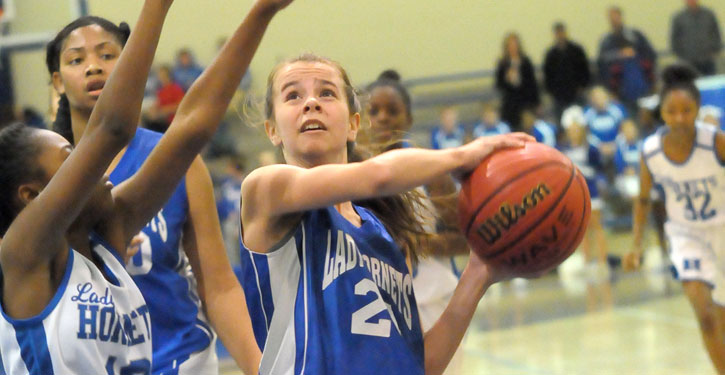 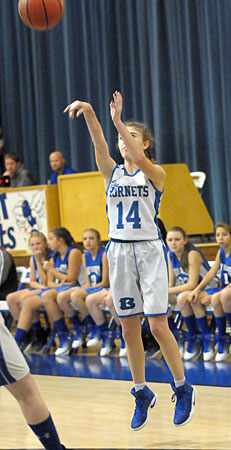 Bryant White scored the game’s first 16 points to gain the upper hand. Once Bryant Blue was able to get into their offense, they worked the ball inside to Jade Rivers who wound up scoring all 9 of the Bethel points.

An early basket by Witcher was the only scoring for much of the first quarter. After a Bryant Blue timeout with 2:22 left in the period, Dillon was fouled and hit a free throw. Hancock followed up with an 18-footer and LaCerra scored to make it 8-0.

After Bethel’s Rachel Cicero’s shot refused to fall, Dillon drained a 3 to make it 11-0.

Hudspeth scored off the offensive glass to start the second period. A short jumper by Greer and two free throws by Keith made it 16-0 before Rivers grabbed the carom off Christine Meffort’s miss and scored with 2:20 left in the half. 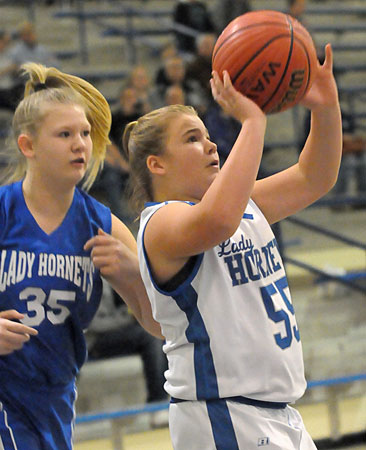 Regan Dillon steps inside of Brooklyn Dunn (35) to get a shot away. (Photo by Kevin Nagle)

Taryn Keim earned a trip to the free-throw line for Blue but her shots refused to fall. In the final seconds of the half, Greer converted a pair at the line for White to make it 18-2.

Hancock started the scoring in the second half then a three-point play by Dillon stretched the advantage to 23-2.

Rivers hit a free throw and, after Keith converted twice at the other end, Blue’s Madelyn Sanders was fouled. Rivers maneuvered to rebound her missed shot and scored to make it 25-5.

Bryant Middle School head coach Ben Perry made sure to get as many players as he could as the game went along.

Bryant White is set to play in a jamboree in North Little Rock on Saturday before finishing up at Sylvan Hills on Monday and at home against Cabot North on Tuesday, Dec. 13. The Christmas break begins after that.

Bryant Blue hosts Lake Hamilton on Tuesday to finish up its pre-Christmas schedule. 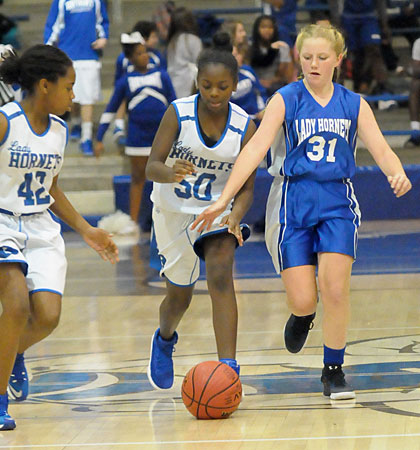 Madelyn Sanders (31) and Shamya Jordan (50) battle for possession of a loose ball as Jayla Purifoy (42) looks on. (Photo by Kevin Nagle) 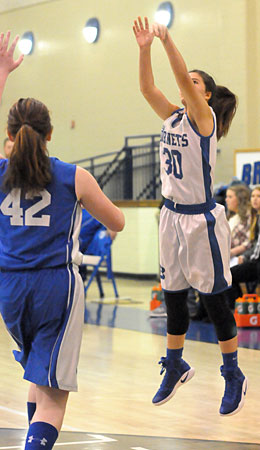 Zacara Witcher (30) follows through on a jumper over Taryn Keim (42). (Photo by Kevin Nagle) 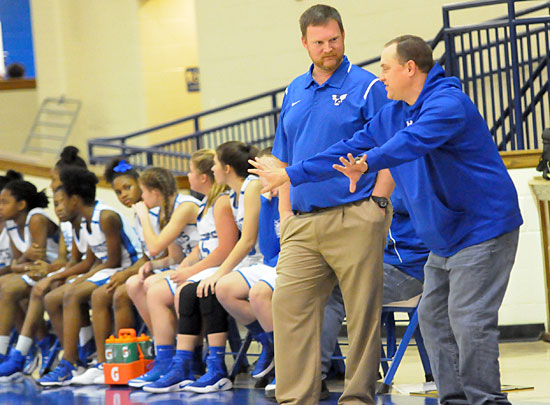