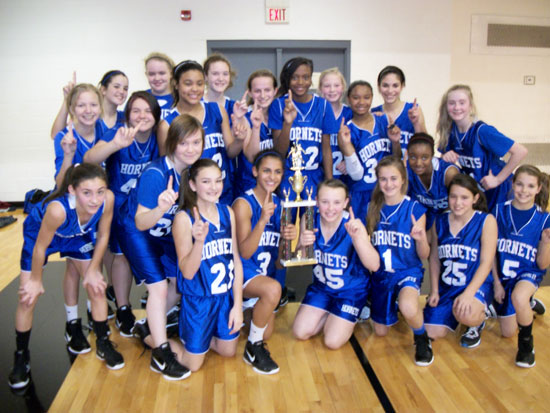 BAUXITE — The Bryant White Lady Hornets seventh grade team of Bryant Middle School captured the championship of[more] a tournament in Bauxite on Saturday with a 23-10 win in the finals over the rival Bryant Blue Lady Hornets of Bethel Middle School.

To get to the title game, Bryant White edged Jessieville 21-18 and Anthony School 29-28.

“I was very proud of the girls,” said Lady Hornets coach DeAnna Ward. “They played very hard all day long.”

In the title game, Destiny Martin finished with 9 points and seven steals. Hadley Dickinson scored 6 points with four rebounds and a pair of thefts. Jadyn Lewis finished with 4 points and two steals with a rebound. Kipperlie Davis led the team with nine rebounds to go with 2 points. Kennedy Harris collected seven boards and hit a free throw while Savannah Schulz had a point and three rebounds.

Martin had 13 points against Jessieville too. She also collected three rebounds and made three steals. Harris finished with 6 points, six boards and a steal with Lauren Lessenberry contributed the other 2 points. Dickinson made six steals and Blend had four to go with two rebounds.