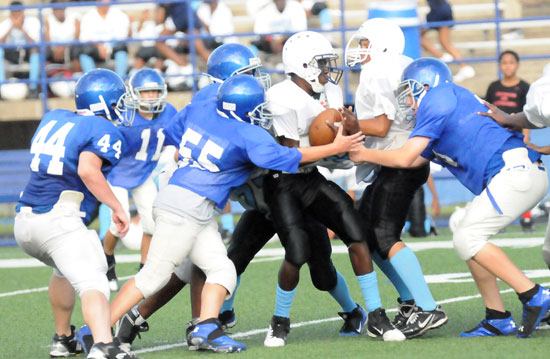 By the time Grant Botti had carried the ball three times, he had amassed 142 yards rushing and a touchdown and the Bryant White Hornets seventh grade team of Bryant Middle School enjoyed an 18-0 lead over the Little Rock Henderson Hawks. 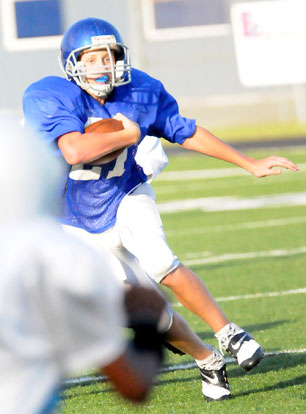 Botti wound up with 145 yards on four carries and the Hornets accumulated 247 yards on just 11 rushes on the way to a 24-0 win over the Hawks at Bryant Stadium Tuesday night.

Quarterback Jesse Windemaker picked up 47 yards and a touchdown and fullback Travis Bradberry rumbled for two scores for the Hornets who improved to 3-1 on the season going into their Oct. 8 trip to Little Rock Horace Mann.

While putting together the shutout, the Bryant White defense limited Henderson to a net of 49 yards of total offense. Six of the Hawks’ 20 snaps resulted in losses. The Hornets also forced a pair of turnovers. Andrew Hayes recovered a fumble with 1:18 left in the first half to set up Bryant’s third touchdown. And, to finish the game, Matthew Fear, despite a cast on his hand, scooped up a Henderson fumble and headed the other way. He was tracked down as the final horn sounded.

Henderson’s opening possession went backwards. A second down play was stopped for a loss when quarterback Kylyn Arnett was dropped by Brady Newman and Jakob Neel. On third down, a fumble undermined the play as Blaise Smith and Nate Wallace.

On the Hornets’ first snap on offense, Botti burst 61 yards before being knocked out of bounds at the 4. From there, Windemaker, coolly snatching up a low snap, sprinted around left end for the touchdown to make it 6-0.

Botti and Neel each had tackles for losses on Henderson’s subsequent possession, which managed a first down before the losses.

With the ball back at its own 45, Bryant White appeared to have another big play when Bradberry powered through the Hawks’ defense for 52 yards. But a penalty negated the play. It only delayed Bradberry’s touchdown, however. Botti broke a 41-yard gallop to the 19 then Bradberry scored from there to make it 12-0. 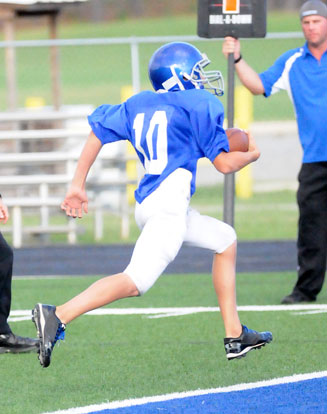 Hayes’ fumbled recovered was followed up by a 12-yard run by Windemaker that set up Botti’s 41-yard touchdown sprint. He scored as the halftime buzzer sounded.

The second half started with Bryant White driving for its final touchdown. Sparked by an 18-yard run by Hayes on a reverse, the Hornets reached the Henderson 49 where they faced a fourth-and-7. On a keeper, Windemaker twice appeared to be stopped as Henderson tacklers grabbed his jersey and spun him around. Somehow, he managed to keep his balance and, cutting back against the grain, wove his way to the 18 for a first down.

Henderson followed with its best drive of the night, going from their 30 to the Bryant White 23 before a big hit by Luke Herman jarred the ball loose from Henderson’s Jessie Sanders and Fear came up with it.

Along the way, Hunter Davis and Brandon Jett had a tackle for a loss. Chandler Taylor made a touchdown-saving tackle and Tyler Jordan and Braylon Butler combined on a nice stop. 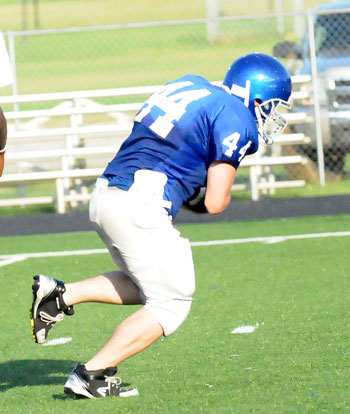