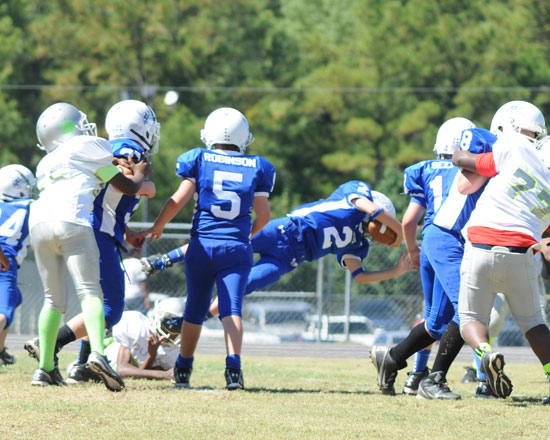 The Bryant Junior Hornets 9 and 10 year old football team was expected to be in for a dogfight Saturday at J.A. Fair High School against the North Pulaski Ducks, but instead asserted their dominance from the opening kickoff and continued that through the final whistle with a 36-0 win to move to 5-0 in the Central Arkansas Youth Football League.

The Hornets took the opening kickoff and drove 45 yards on six plays, scoring on a Ledbetter’s 6-yard run.  On North Pulaski’s first drive, the defense forced a three and out and Ledbetter took the first play of the ensuing drive 45 yards for a second score. He finished the game with nine carries for 91 yards and three touchdowns.

The defense created two more turnovers in the first half and, at the break, Bryant led 16-0.

The second half was a lot like the first as Bryant recovered the opening kickoff of the half and drove the ball 34 yards, capped off by a Tyler Nicholas 3-yard run. Nicholas along with Cain really wore the Ducks down with hard running all day behind a dominant offensive line that consists of Trey Miller, Turner Seelinger, Hayden Purdy, Braden Robinson, Zach Feimster, Logan Pritchard, and Kory Shelnut. Nicholas finished with eight carries and 74 yards while Cain had 12 carries for 86 yards.

The defense, which has been an immovable force all season dominated, allowing only 9 yards total offense while creating a total of four turnovers.  Hayden Brent had an interception, Gavin Burton made three tackles for losses, and Cameron Scarlett had four tackles.

The defense topped off the scoring as Will Hanson and Scarlett sniffed out a reverse and, when the ball squirted out, Brayden Godwin scooped it up and ran it in to make the final of 36-0.

On the season, the defense has only given up 5 total yards, three first downs, and one score.

Bryant has now outscored its opponents 183-6 and remains the only undefeated team in the Central Arkansas Youth Football League.  The Junior Hornets get back to work this