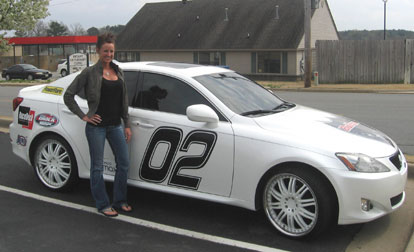 Anyone that has spent even a few minutes watching a so-called “reality” television show has noticed there are times when the claim stretches the limits of credibility.

But Brooke Bettoney of Bryant will tell you flat out, from experience, reality is just what you get on the SpeedTV program Bullrun which airs Thursdays at 9 p.m., preceded by the previous week’s edition.

She knows because she was there as half of Team Lexus, joined by her friend Amanda Ensminger of Little Rock.

The show was taped between Thanksgiving and Christmas 2008 and is airing now. It’s three shows into the 10-episode season and, so far, Team Lexus has won twice while three of the original 12 teams have been eliminated.

Do they win? Do they get eliminated?

She can’t tell. You’ll have to watch.[more]

“Bullrun is a road rally,” she explained in an interview on Tuesday, March 10, at a table in the Pasta Jacks restaurant in Bryant, which her family owns and she manages. “It’s point A to point B with checkpoints in between. You have to hit each checkpoint then you have to make the final destination. You have to follow the rules of the road, no speeding, no tickets, no illegal U-turns, no running red lights or anything. But, if you choose to do them, then you get penalized. So you kind of have to judge, ‘Maybe I’m not in first place. Should I speed a little bit, get there, take the penalty?’ You never know.

“It’s a race and kind of a scavenger hunt,” she continued. “The checkpoints, sometimes they’ll give you an address, sometimes they just give you a landmark. Like the Lake Powell episode that was show number two. It didn’t say Lake Powell, it said the marina something and you have to put two and two together to figure out, on this major lake, was it the east marina, west marina or some other marina. You don’t know. You have to stop and ask people, which they want you to do. It was fun. Sometimes they gave you an address but then some of the address wasn’t posted, like with a mailbox or something. They try to confuse you on purpose. They try to make it as complicated as possible.

“It was truly reality. People say reality shows aren’t reality but I can vouch for Bullrun. It’s reality. You’re on camera 24/7 and you literally forget the cameras are there. The first couple of days, you’re a little shy and you’re aware of the cameras but, after three or four days, you completely forget they’re there. We were in a different city every two days for 20 days. We put in right under 4,000 miles in 20 days.”

Team Lexus was the duo’s name because Bettoney owns the 2008 Lexus IS-250 that they raced with in the show.

“I’ve had it about a year so it was still pretty new when I took it,” she related. “It took a little bit of beating, rock chips and stuff like that for sure. We drove it through rain, snow, ice, mud, dirt, gravel — I mean everything. My rims on it aren’t as pretty as they used to be but they’re still okay.”

So, how does someone from Bryant get in on such a thing?

“I applied for season one of Bullrun when it was on SpikeTV,” Bettoney recounted. “I found out about it from the girl I tried out with. She lives in Pennsylvania and she found out about it through cardomain.com, I think. She told me about it and we tried out together. We made it to final casting there but they chose another team over us and sent us home.

“From SpikeTV, they switched to Speed Channel. It’d been two years and I thought they had done away with the show. But one day I was at work and I got a phone call from a California phone number and I thought, ‘This’ll be interesting.’ None of my friends live in California. I picked it up and they said, ‘Hey, we’re with Bullrun. We want you to do season two. They told me to find a teammate. So I called my friend Amanda. I sent a text to her because I knew she was in class. She’s a student at UCA. I said, ‘Hey, you remember that TV show I tried out for a couple of years ago? You want to do it with me this year.’ She said, ‘Sure.’ She had to re-schedule all of her finals because we’d be gone for a month.

“We started getting things together. We did an audition tape. Even though we kind of knew we had it in the bag, they still wanted us to do one. They just wanted us to be goofy, wanted us to be ourselves, tell them about the car. We sent it in, they called us and said, ‘Love you, you’re definitely coming out to Los Angeles.’ They were sending 20 teams out there and they were going to take 12 teams.

“So they tell us we made the show, we’re in the cast. They shipped the car from (Bryant) to California, stickered it all up for me and that was that. We were in Los Angeles for about five days doing interviews and promotion and pictures then we hit the road. They really didn’t give us much time to prepare. I mean, our nails weren’t done, our hair wasn’t done, we didn’t pack the right clothes, nothing. We found ourselves running to WalMart to pick things up."

“It’s weird,” Bettoney answered. “You don’t realize how you sound to other people. You notice all the little things you do and say. But it’s fun. I’m enjoying it.

“I’d do it again in a heartbeat,” she added. “It was definitely a once in a lifetime experience. You know, you could fly to all these places and see what’s there but actually driving from one place to another place, driving through the canyons and seeing some of these things. Even the desert was interesting. You don’t think a desert’s very interesting but it really was.”

The Bullrun web site http://www.speedtv.com/programs/bullrun/ has this to say about Team Lexus: “Sweet and funny car-chicks from Arkansas … Party girls who can hold their own with dudes and who surprisingly know cars well. These two are not your typical girls, they love competition, racing, are in search of an adventure.”

So, is this TV thing in Brooke Bettoney’s blood now?

“I don’t think I would do another reality show but I’d like to do something else,” she answered. “I think it’s fun. I never wanted it as a career or anything like that but, if an opportunity came my way, I’d probably take it.”