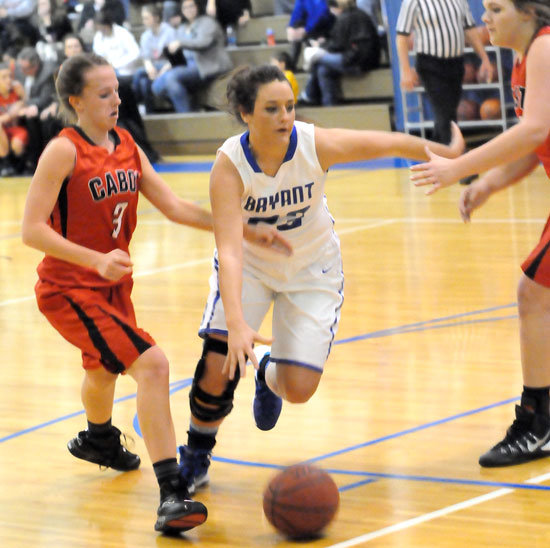 When they met in the second round of a tournament in Cabot, the Bryant Lady Hornets struggled against the Cabot Lady Panthers’ long, active zone defense, which they often extended to three-quarter court. After winning their first three games, the Lady Hornets suffered a 49-32 loss that only got away at the end.

Since then, Bryant has been in a funk offensively and has won just once in the subsequent five games including their return from the holiday break on Monday night when the Lady Panthers came into the Hornets’ Nest and once again vexed the Lady Hornets with that tough defense.

But, at the end, the Lady Hornets showed some life on offense and, even though it came against one starter and four reserves for Cabot, it could be a confidence builder for Bryant going into the 7A/6A-South Conference season.

League play begins this Friday when Bryant visits Benton, where the Lady Hornets will be taking on one of the best teams in the league right off.

Bryant more than doubled its output for the previous three quarters by outscoring Cabot 20-4 in the final period trimming a deficit of 29 points down to the final 45-34 count.

“Hopefully there’s some things we can see on film and build on,” said Bryant coach Brad Matthews. “We’ve got a big game, conference starts Friday so we’ve got to definitely learn from our mistakes. But we did some things positively in the fourth quarter that we can build on. We needed something positive to happen there to kind of keep us going a little bit.

“I thought our kids executed a little bit better in the fourth quarter and we’ve got to build on that,” he emphasized.

The Lady Hornets handled Cabot’s 2-1-2 press in the first quarter and led much of the period. A free throw by Aubree Allen and a 3-pointer by Peyton Weaver had produced a 4-2 lead. Jakeria Otey answered a free throw from Cabot’s Coco Calhoon by scoring inside to make it 6-3.

Behind Calhoon, who scored all 15 of her game-high point total in the first half, the Lady Panthers pushed to a 7-6 lead going into the final minute of the period. But when Jayla Anderson fed Erica Smith for a basket inside, Bryant was back on top 7-6.

A stickback by Leighton Taylor, however, came Cabot a one-point margin going into the second quarter.

What followed Smith’s bucket was a stretch in which Bryant went 10 minutes without scoring. Cabot started trapping out of its zone in the halfcourt and the Lady Hornets suffered 10 turnovers in the second quarter. By the time Weaver drained a 3 to end the Bryant drought, the Lady Panthers has put together a 23-0 blitz starting with Taylor’s basket to end the first quarter.

It was 23-8 at the half and 30-8 before Weaver’s triple. A follow shot by Lakyn Crumbly for Cabot was countered by Allen’s three-point play to make it 32-14 but the Lady Panthers scored the next 11 points.

“They spread out and got into the passing lanes,” Matthews said of the Cabot defense. “The deny the wings and make you make some plays. We struggled with that. I know we had far too many turnovers. We’ve got to limit those, eliminate those turnovers and get good shots. When there are so many turnovers, it’s tough to get into an offensive rhythm. It’s tough to attack then make plays on the backside.”

Allen started the Lady Hornets’ closing surge with a 3-pointer from the corner. Otey snapped up a loose ball in the Bryant key and drove for a layup.

After two free throws by Cabot’s Emily McCaghren, Allen added a free throw, Anderson rebounded the miss on her second shot and Allen was fouled again inside. This time, she made both to make it 45-22. She would add a basket inside with 3:34 to go and Weaver followed up with a 3-pointer. Smith hit the offensive boards to add to the rally. Another trey by Weaver and a driving jumper by Otey completed the 20-2 run. 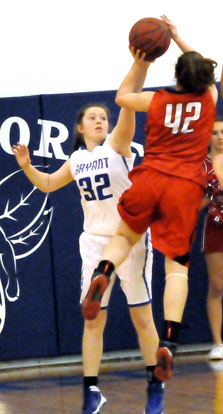 Weaver and Allen finished with 12 points each. Otey had 6 and Smith 4.

Cabot forced 23 turnovers while committing just nine while out-rebounding Bryant 29-22 with 15 offensive rebounds. The Lady Hornets were frustrated by the fact that they shot just nine free throws to Cabot’s 20. Allen was the only player to go to the line for Bryant.

The Lady Hornets, who were playing their first home game of the season, are now 4-6 on the season going into Friday’s game at Benton.