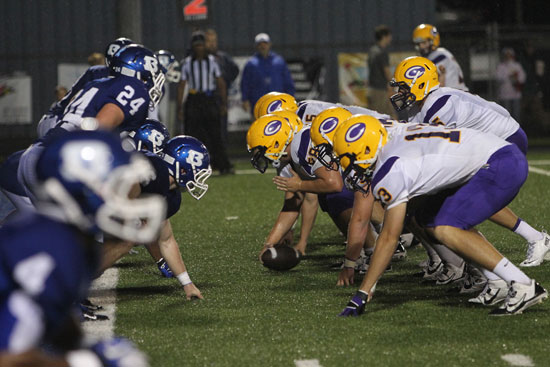 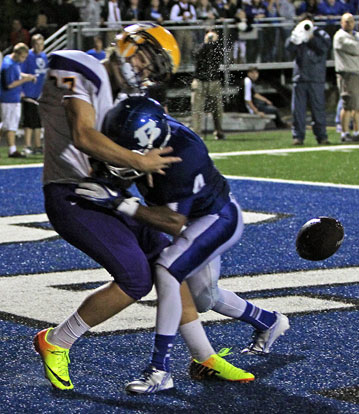 And he’d declare that as often after a big victory as after a difficult defeat.

Both were non-conference games, just like the season-opening loss at Conway. They have nothing to do with earning a league title. They’ll have no bearing on getting to the State playoffs nor succeeding there with a team that could be far better by then.

The real season starts on Friday, Sept. 27, against the Benton Panthers in the annual Salt Bowl at War Memorial Stadium. Nothing like having your archrivals looming to help put a tough outing in the rearview mirror.

And it was a tough outing.

The Hornets trailed early 10-6 but seemed to grab all the momentum late in the second quarter. An eye-catching four-play, 80-yard streak that included 36-yard bolts by Brushawn Hunter and Brendan Young gave Bryant a 12-10 lead with 6:02 left in the half.

Aided by a holding penalty and Bryce Denker’s tip off a third-down pass, the Bryant defense, which had made an impressive goal-line stand earlier, forced a Rockets punt. A high snap nearly cost the Rockets but punter Josh Hartnedy hauled it down and just got the kick away. 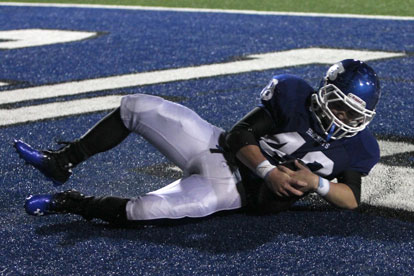 Collin Chapdelaine falls on the fumble in the end zone forced by Mark Nelson’s hit, resulting in a Bryant touchdown. (Photo by Rick Nation)

The teams traded punts. With just under two minutes left in the half, Catholic was in punt formation again deep in its own end. This time, however, the snap got over Hartnedy’s head, rolled to the back of the end zone then, before going out the back, spun there. Hartnedy retreated and, instead of just booting it out of the back of the end zone and taking a safety, he scooped it up and tried to punt it.

But Bryant’s Mark Nelson was there to smack him before he could lay a foot on it. The ball hit the ground almost as fast as Hartnedy did. Linebacker Collin Chapdelaine pounced on it for a touchdown.

So here’s a Catholic team that came into the game 0-2 after giving up 78 points in its first two games, suddenly with a 9-point deficit after having had a lead. There’s just 1:37 left in the half. The Rockets could’ve licked their wounds, run out the clock and head to the locker room to regroup. 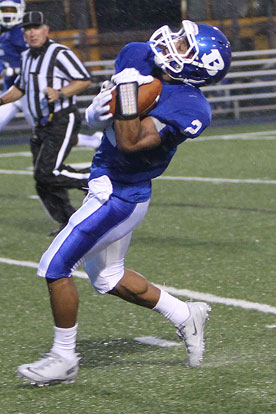 To top it off, the Rockets, who had won the opening coin flip and chose to defer their decision until the second half, was set to get the ball back to start the third quarter.

Eleven plays, 80 yards again. This time, in less of a rush — using 4:18 — Catholic marched into the lead. Quarterback Zac Pinter tossed 8 yards to Aaron Hamaker for the 6, the first of three Pinter TD passes in the second half.

The Hornets never quite recovered from those two 11-play, 80-yard touchdown drives.

“I give Catholic a lot of credit,” said Hornets head coach Paul Calley. “We talked about it before the game. They always play us tough. They had a great game plan. They executed all night.

“I thought our kids played hard,” he added. “I don’t fault them one bit. We’ve got to eliminate mistakes. We put ourselves in too many long-yardage situations on offense and you can’t overcome that, not consistently. We left our defense on the field way too long.”

As it turned out, the Rockets wound up with 83 offensive snaps to 36 for Bryant. With plenty of opportunities, the Hornets had two tacklers in double figures. Safety Jake Johnson wound up with 16 stops with linebacker Davis Nossaman in on 13. Hunter Fugitt had a hand in nine and Denker eight. 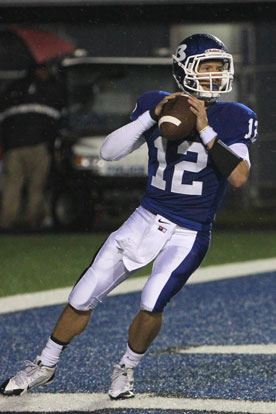 Brandan Warner looks to throw out of his own end zone. (Photo by Rick Nation)

Trailing 24-19, the Hornets had three possessions to answer. Two of them ended with punts. In between, the second interception by Catholic’s Cole Moore foiled things.

Catholic’s defense was prepared for both of Bryant’s offenses, the ground-oriented one quarterbacked by Devonte Howard, which surprised Little Rock Central, and the more pass-oriented one, helmed by Brandan Warner. After Young’s long touchdown run midway through the second quarter, the Hornets managed just two first downs with a net of 41 yards total offense the rest of the game.

On offense, the Rockets kept pounding the undersized Bryant defense with Mariani. Speedier D.J. Brown provided a change-up now and then and, using play-action, Pinter completed 8 of 10 passes in the second half.

Trailing 24-19, the Hornets got good field position thanks to a long kickoff return by Hunter. They picked up a first down on a 15-yard completion from Warner to Hunter, reaching the Catholic 43. From there, however, Howard was stopped for no gain; Warner, scrambling to try to get a pass away, fumbled the ball out of bounds for a loss; and another fumble, though recovered by guard Jacob Ward, forced a punt.

Bryce Denker came through with a nice coffin-corner punt that pinned the Rockets at their own 9. Though they drove it out to the 39, the Hornets held and Hartnedy punted it back.

This time, a holding penalty undermined the Hornets’ efforts. On a third-and-16 from their own 27, a fade route that Warner tried to get to Hunter was picked by Moore. 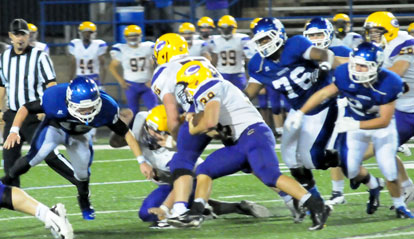 A Bryant defender draws a bead on Catholic running back Joe Mariani (39) as Cameron Murray (76) and Bryce Denker (24) pursue. (Photo by Kevin Nagle)

The Rockets went three and out but Pinter punted the Hornets back to their own 2. Young turned in an 8-yard run and a third-down pass from Warner to Howard picked up a first down.

The drive stalled at the 17, however, and, after a Denker punt, the Rockets had the field advantage at the Bryant 44. On the second play of the series, Pinter lofted a pass down the left sideline that Julian Hutchison ran under, perfectly in stride, sprinting on into the end zone. Hugen added the extra point and the Rockets had a two-score lead with 8:27 left.

Moments later, the Hornets were punting back to the Rockets who proceeded to drive for a clinching score, a 10-yard pass from Pinter to Brown to cap off an 11-play, 52-yard drive that drained nearly six minutes. 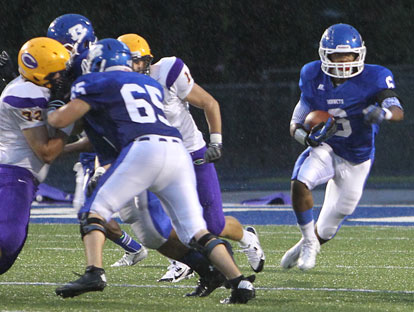 Bryant had opened the scoring in the game with a 41-yard touchdown pass from Warner to Hunter. The extra point attempt hit the right upright, leaving it 6-0. Catholic answered with a 15-play, 73-yard drive capped by Mariani’s 3-yard plunge. The Rockets got a break midway there when Pinter was sacked by Fugitt but the play was negated by offsetting penalties. Hugen’s PAT gave the Rockets the lead.

On the next Catholic possesion, a 43-yard pass from Pinter to Hamaker produced a first-and-goal at the 3. The Hornets defense held, however, with Denker knifing in to drop Mariani for no gain on third and fourth-down plays from the 1.

Moore’s first interception followed on the very next play, however, and the Rockets drove to 22 before Nossaman dropped Brown for a loss. Hugen came on, though, and booted a 42-yard field goal to make it 10-6. A lead that didn’t last long, however. Young scored less than a minute later on his 36-yard dash.

Bryant’s 1-2 start to the season is the worst since the 1996 team opened 0-3. It is, however, just the second time (the other was last season) a Hornets team has opened with three Class 7A opponents. 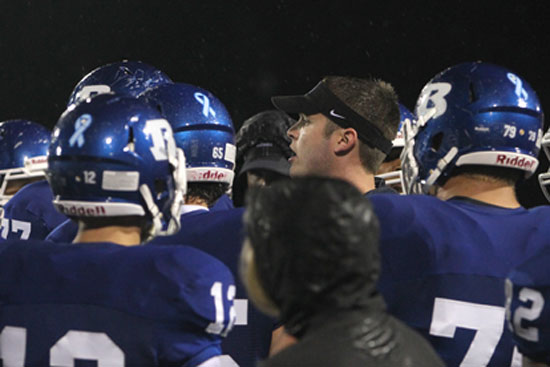