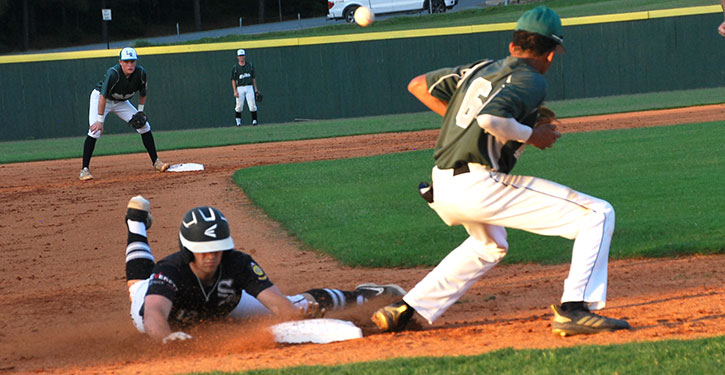 Illness — good old mono — sidelined Logan Catton for most of his senior season for the Bryant Hornets high school baseball team. Now recovered from the weakening aftermath of the malady, he was able to finally get back into game action on Thursday night as the Bryant Black Sox Senior American Legion team opened the 2019 season at BHS Field.

Catton went 1 for 4 at the plate, played flawlessly at third and second, then came on as the fourth Sox pitcher and retired the last four batters on just 14 pitches to earn a save as Bryant forged a 6-4 victory over the Little Rock Post 1 Vipers.

All four of the Sox’ pitchers hadn’t had much mound time in a while. Braden Lester started and allowed one run over three innings, then side-winding Slade Renfrow went two scoreless. Noah Davis surrendered three runs on a pair of walks, a couple of singles and an error before Catton took over with the tying run at third and two down in the sixth.

“In high school, they need three arms, four arms and we really need seven or eight in the summer,” explained Black Sox manager Darren Hurt. “So, the first few games, sometimes it’s a little ugly but we have to commit to it and we’ve got to find out who’s going to be able to help us because we’ve got to get to eight people.

“I was pleased for the most part,” he related. “I really like what Renfrow can bring to the table. He’s just got to throw consistently so he can get confidence and things like that. I think when he’s throwing on a regular basis, he’s going to be really good.”

Renfrow wound up the winning pitcher.

“Catton threw really well and, you know, Braden got himself into a couple of binds, but he got out of all of them,” Hurt continued. “He got a lot of groundballs. Noah was an experiment that didn’t work out real well. First time out. But we’re not going to give up on him because, like I said, we’ve got to have a lot of arms.”

The Hornets came through with six hits while benefitting from six walked, four hit basemen and two errors. Though they scored six runs, they stranded 11.

“The bases loaded a couple of times, we did not come up with the big hits,” Hurt acknowledged. “We did a couple of times when we needed a hit. LG (Logan Grant) came up with a big one but we didn’t consistently get up there — we didn’t take advantage of them walking us two or three times in an inning. We should make that hurt. We didn’t.”

In fact, the Sox left the sacks jammed three times. Grant had an RBI single to cap a four-run second.

Cade Drennan had two hits. Along with Catton and Grant, Jake Wright and Davis had hits.

“Right now, offensively, it’s kind of a mindset deal where they need confidence,” Hurt explained. “I think once one guy comes up there with the bases loaded and hits one in the alley, maybe the next guy does it and then, all of a sudden, it goes.

“What we saw tonight was, in every one of those big spots, we swung at bad pitches,” he noted. “We’re over-anxious, wanting to come through with the big hit instead of just sitting in there hitting and treating it like another at-bat. Then, all of a sudden, you’re squeezing it a little bit tighter and get a pitch in the dirt and you’re hacking at it with a full count and the bases loaded.

“I think they’re just pressing offensively. We need them to relax and just get up there and hit. It’s hard to treat a bases-loaded at bat with two outs the same as you do a nobody-on, two-out. And I understand that, but you’ve got to figure out how to do it.”

Lester, Renfrow and Davis each had some rust to knock off and it manifested itself as the first two batters each faced reached base. In the first against Lester, it was an infield hit on a chopper to second by C.J. Price and a hit batsman as Evan Stewart reached. Both runners moved up on Grant Jones’ grounder to Dillon at first then Andrew Howard hit a little roller that Lester fielded and threw to first for the out. Meanwhile, Price was holding at third only to have Stewart take off from second. The Hornets got Price in a rundown between third and home and tagged him out to retire the side.

Jacob Wagner, who started on the bump for the Vipers, retired the Sox in order in the home half. Lester pitched around another hit batsman with help from his catcher, Drennan, who threw out the runner, Gage Hall, as he tried to steal second.

Bryant’s second began with consecutive walks to Wright and Gage Stark. Dillon got a sacrifice bunt down but when Price’s throw to first careened down the right-field line, both Wright and Stark scored. Dillon wound up on third and, moments later, he scored on Grant’s single.

Grant raced all the way to third on a wild pitch that Vipers’ catcher, Howard, couldn’t find initially. He scored on Coby Greiner’s bouncer to second to make it 4-0.

Davis doubled but was stranded.

In the top of the third, Asher Hastings drew a walk then Keely Davis doubled him to third. He wound up scoring on a wild pitch as Lester was retiring the next three, the top of the Little Rock batting order as the Vipers stranded the runner at third.

An error, a hit batsman and a walk with one out loaded the bags for the Sox in the bottom of the third but Wagner fanned the next two to keep it 4-1.

Renfrow relieved in the top of the fourth and hit Howard with his first pitch then walked Ivory Daniels. Though they worked a double steal, Renfrow kept them at second and third as he retired the next three, two on strikes.

Consecutive singles by Catton, Drennan and Wright with two out in the bottom of the fourth led to Hall coming in to relieve Wagner. He escaped damage with a strikeout.

Renfrow fanned two more in the fifth, around a walk to Price. But when Price tried to steal, Drennan gunned him down too.

The Sox tacked on a run in the home fifth. With one out, Grant was struck by a delivery from Hall. Greiner walked then they worked a double steal. With two down, a wild pitch allowed Grant to score as Chambers drew a two-out walk.

Trailing 5-1, the Vipers rallied in the top of the sixth. Davis issued walks to Jones and Howard before getting Daniels to line out to Greiner in center. A sharp single to left by Hall loaded the bases but Davis came back to fan pinch-hitter Ben Devine.

He got within a strike of escaping unscathed but, on a 3-2 pitch, Hastings singled up the middle. Two runs scored then on an errant relay to third, Hall scored as well, and Hastings wound up at third, representing the tying run.

But Catton came on and fanned Keely Davis to preserve the lead.

Drennan singled, Wright was struck by a pitch and Stark drew a walk with one out in the bottom of the sixth. Dillon picked up an RBI as he was plunked by a 1-1 delivery, but Hall came back to get the next two as Bryant stranded three again.

But Catton eased through the top three in the Vipers’ lineup on 10 pitches to nail down the win.

The Senior Sox are scheduled to return to action on Monday when they’ll play Magnet Cove and, after Magnet Cove takes on Cabot, Bryant and Cabot will play. 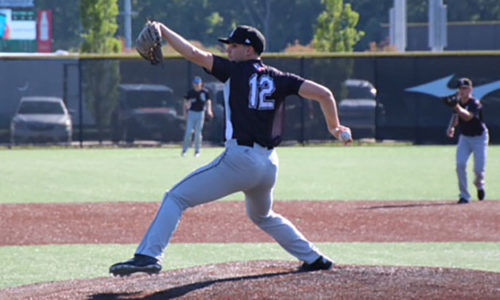