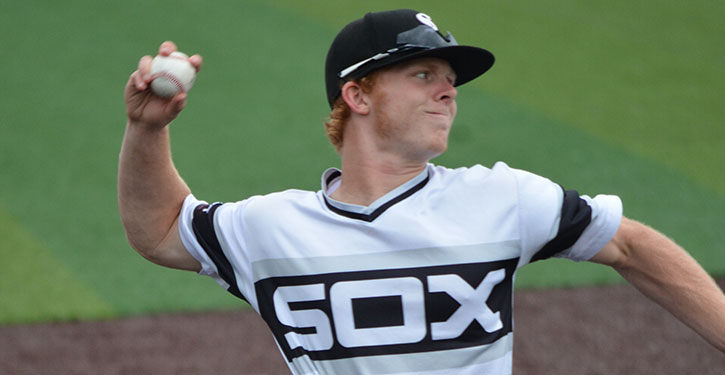 Few home runs are hit at Bryant High School field. Though folks may not remember, the field was built while the Bryant Hornets’ head coach was Terry Harper, a former Hornets pitching ace who went on to pitch in the Minor Leagues. The field’s dimensions are approximately those of a Major League stadium including right at 400 feet to dead center with a high wall.

Most years — high school and American Legion seasons — you can count on one hand how many balls leave the park.

So, it was notable that, on Tuesday night against the Benton Everett Buick GMC Senior Legion team, that Logan Chambers cleared the fence in right with a solo homer in the bottom of the sixth that helped cap off a 6-3 victory for the Bryant Black Sox Senior team.

It was Bryant’s 20thwin of the season (against four losses).

Chambers and Scott Schmidt each had two hits and Coby Greiner came through with a clutch two-out two-run single to highlight the victory. Benton scored three runs, just one earned, on five hits against the Sox’ trio of Grayson Prince, Peyton Dillon and Boston Heil.

Prince, making his first start of the season on the mound, ate up over three innings for the arm-weary Sox, blanking Benton on one hit until the fourth. He dueled with Benton starter Jackson Shelton, who had the Sox shut out on two hits over the first three frames.

In the fourth, Connor Pinkerton led off with a single for Benton, took second on a wild pitch and third on Logan Black’s sacrifice. Westyn Buchanan singled him in for the first tally of the contest.

Prince gave way to Dillon who walked Austin Bull. Shelton followed with a sacrifice bunt that resulted in a bad throw to first that allowed both Buchanan and Bull to score, making it 3-0.

Luke Weaver made a bid for a hit, but Chambers made a lunging play to his right at short to snag the liner then Dillon fanned Logan Gartin to end the uprising.

The Sox responded with three of their own. With one out in the home fourth, Schmidt ripped a gapper to left-center for a double. A wild pitch allowed him to take third as Brandon Hoover drew a walk.

Myers Buck laced a liner over the leaping shortstop J-Red Kelly, driving in Schmidt with the Sox’ first run. And, when Logan Grant drew a walk to load the bases, Shelton gave way to Kelly on the mound.

A strikeout threatened the close down the Bryant rally but, on an 0-1 pitch, Greiner slapped a single to right that chased home hoover and Buck. Grant wound up at third.

With Chambers at the plate, Greiner stole second, drawing a bad throw from Weaver, the Benton catcher, which allowed Grant to score the go-ahead run.

Dillon fanned two in the top of the fifth then issued a walk to Pinkerton. But when, with two strikes on Black, Pinkerton tried to steal second, Sox catcher Ryan Lessenberry threw him out to end the inning.

In the home fifth, Jake Wright drew a lead-off walk. Lessenberry sacrificed him to second and Scott Schmidt’s looping liner to right put runners at the corners. A walk to Hoover filled the sacks.

Kelly got the second out on strikes then had Grant down to his last strike but, his 2-2 delivery, struck Grant, forcing in Wright with an insurance tally.

In the sixth, Dillon issued a two-out walk then gave way to Heil. He was greeted by a single to left from Carson Buchanan that sent Bull to third. With the potential lead run at the plate, Heil induced a grounder to third by Weaver that ended the inning.

With one out in the home sixth, Chambers unloaded on a 2-2 pitch for his solo homer and a 6-3 lead.

Heil then pitched a scoreless second with the help of Lessenberry, who made a fine catch on a foul pop by Tristan Hutchinson for the second out. Kelly singled to right, but Pinkerton lined to Logan Catton at third to end the game.

The Sox are scheduled to play at Cabot tonight around 8 then they’ll travel to Memphis for the annual Keith Hagan All-American Classic starting Friday. 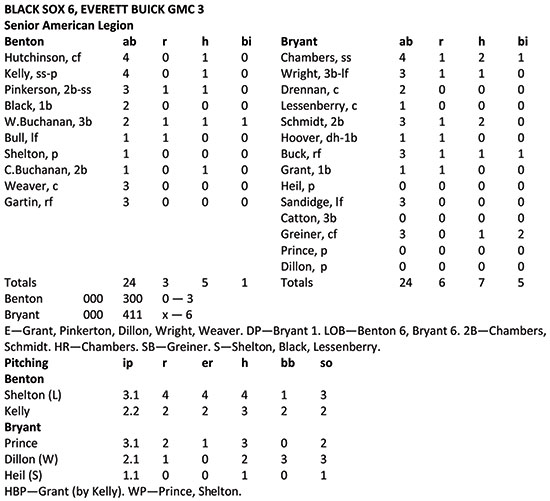