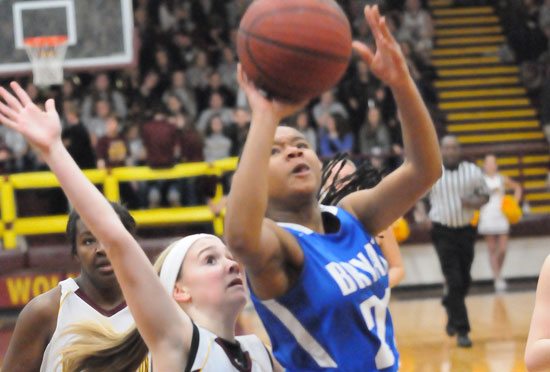 Kendal Rogers goes up for a shot off a drive to the hoop. (Photo by Kevin Nagle)

PEARCY — With the game tied 15-15 with :34.9 left in the game, Bryant freshman Kendal Rogers coolly stepped to the free-throw line and drained a tiebreaker. And, after a timeout by the Lady Hamilton Lady Wolves, she went back and swished a second shot.

Moments later, she rebounded the miss on a Lady Wolves’ shot and was fouled again. And once more, she converted despite a timeout between shots to give the Lady Hornets a 19-15 lead.

Hannah Blocker hit a free throw for Lake Hamilton with :05.1 showing but when she missed the second Riley Hill rebounded and was fouled. Hill’s free throw with :02.7 showing made it a two-possession lead and enabled the Lady Hornets to secure the win, 20-19, despite Blocker’s 3-pointer at the buzzer.

The win improved Bryant to 9-9 overall and 2-1 in the Central Arkansas Junior High Conference. The Lady Hornets bounced back successfully after a disappointing 20-12 loss to Benton, which stymied them with a packed in zone defense, on Thursday, Jan. 23.

“They played the same defense that Benton did and we figured they would,” observed Bryant coach Nathan Castaldi of Lake Hamilton. “The girls did a really good job in practice on Friday of preparing for that. I think we won this game on Friday. We didn’t score a bunch but I thought we got better looks and we were more comfortable going against the zone.”

Destiny Martin led the Lady Hornets with 11 points as she slashed into the gaps of the Lady Wolves’ zone to get to the basket and created opportunities with five steals. She struggled, however, from the free-throw line, going 3 of 13. As a team, the Lady Hornets were 8 of 19.

“We didn’t shoot free throws well Thursday (against Benton) and we didn’t shoot them well tonight so I guess that’s definitely something to work on,” Castaldi acknowledged. “Kendal did a good job of making some near the end and Riley hit a big one to put us up 4 with two seconds left.” 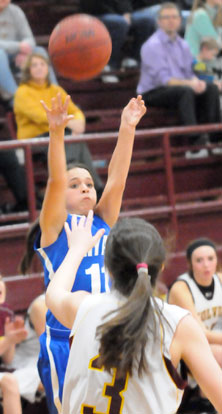 It was the only point scored by anyone other than Martin or Rogers (who had 8). Castaldi praised Hill who held Lake Hamilton’s post player Anna Ledbetter to 1 point.

“Riley, she’s overmatched every game,” the coach said. “She always draws the other team’s biggest girl. Tonight (Ledbetter) was probably four or five inches taller than her and a lot stronger. But she battled all game long. We talk about how tough her job is every game and I thought she did a really good job tonight for us.”

Blocker, an eighth grader, scored 12 for Lake Hamilton. No one else had more than 2.

But it didn’t look too good for the Lady Hornets at the outset. They were unable to score in the first quarter and trailed 7-0 until Martin hit two free throws after making a steal with 5:21 left in the half.

As it worked out, Bryant held Lake Hamilton without a point in the second quarter and, with baskets by Rogers and Martin along the way, cut the margin to 7-6 by halftime.

In the third quarter, the Lady Wolves managed just three free throws without a field goal. Martin’s steal and pull-up jumper put the Lady Hornets up before Ledbetter’s free throw then neither team scored for nearly four minutes.

Lake Hamilton took the lead with 1:43 left but Martin’s drive for a bucket tied it and when she hit a free throw with :02.2 left, the Lady Hornets had a lead.

Rogers finished with a game-high eight rebounds capped off by the two she collected leading to her clutch free throws at the end.

The Lady Hornets play next on Thursday when they host Conway White. 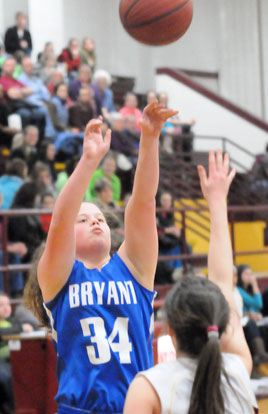