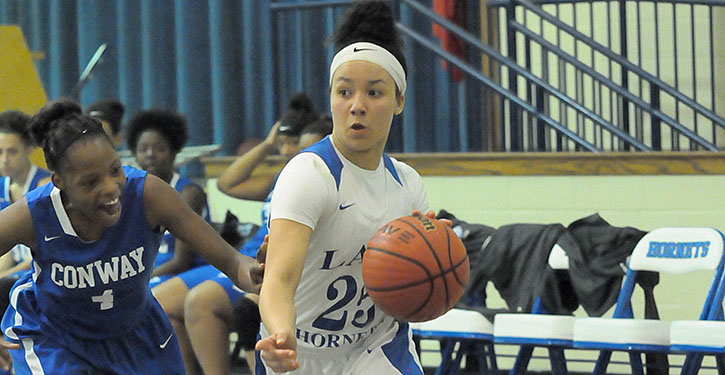 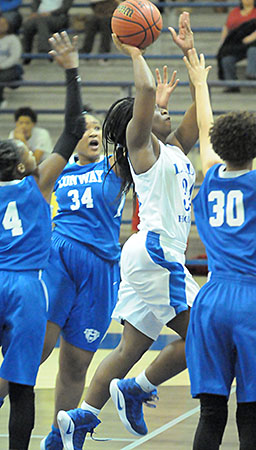 Ivory Russ puts up a shot in a crowded lane. (Photo by Kevin Nagle)

It was beginning to look like the Bryant Lady Hornets freshman team’s payback tour would land a big prize Thursday night. After trailing the Conway Blue Lady Wampus Cats early, the Lady Hornets had taken the lead as the second quarter unfolded. And they didn’t relinquish it through the end of the third quarter.

In fact, when Lexi Taylor hit a layup off a sweet feed from Ivory Russ on a drive-and-dish, the Lady Hornets had a 27-23 advantage with 1:53 left in the third quarter.

The Lady Wampus Cats, who came into the game leading the Central Arkansas Junior High Conference with a 12-0 mark, turned the ball over and star point guard Jada Pickens just missed picking up her fourth foul on the offensive end. But before she ran over one of the Lady Hornets, she was cited for traveling.

Bryant wound up with three chances to add to its lead. A held ball cost them possession initially. After a Conway Blue miss, Taylor got inside again but had her shot blocked. The Lady Hornets forced a turnover but gave it right back to the Lady Cats who cashed in with two free throws by Pickens.

In the final 29 seconds of the period, the Lady Hornets missed twice and, after forcing another Conway Blue turnover, lost the ball in the closing seconds. 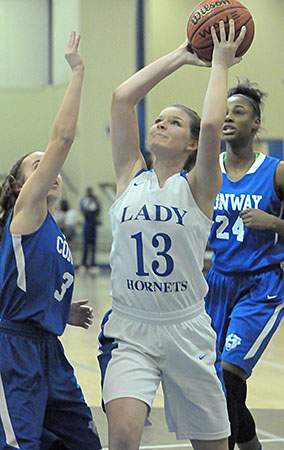 Kinley Oholendt gets a shot away in front of Conway Blue’s Jenna McMillan (3) and Olivia Kilgore (24). (Photo by Kevin Nagle)

But they still took a 27-25 lead into the final quarter.

Showing they’re unbeaten in the league for a reason, the Lady Cats proceeded to limit the Lady Hornets to a single free throw in the fourth period. They caught up and surged to a 36-28 win to keep their league mark unblemished.

Earlier in the season, Blue had edged Bryant 26-21.

Bryant is now 16-4 overall this season and 9-4 in the league. The Mount St. Mary Academy Mounties are due to visit the Lady Hornets on Monday, Jan. 30. It’ll be the final regular-season home game for Bryant, which closes out with road games at Russellville, Cabot South and Conway White.

They’ll have a chance to play once more at BMS as the conference tournament gets underway on Feb. 15. Half of the opening-round games will be played at Bryant and the other half at Benton, which will host the rest of the tourney.

“The first three quarters, we looked good,” acknowledged Lady Hornets head coach Nathan Castaldi. “They made some adjustments and I’ve got to do a better job of getting us into the spots that we need to get to finish. 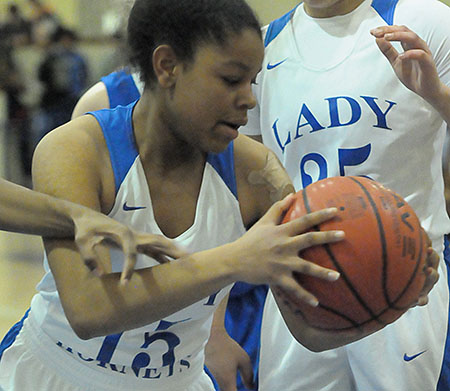 “In the second half, we really struggled to get the ball to those spots,” he noted. “And give them credit. They’re long and they take some things away and they did a good job of that. I thought we got a little impatient sometimes, trying to get it where we wanted. But even when we got the ball inside, we struggled to finish just because of their length.”

As it turned out the Lady Hornets missed their last 17 shots from the field including eight 3-point tries. Celena Martin provided the lone point of the fourth quarter with a free throw with 1:25 left. That cut the Conway Blue lead to 32-28.

Ebonee Kyle scored 8 of her 10 points in the final stanza. She hit two free throws to tie it at 27 and it stayed that way for over two minutes before Jenna McMillan hit a 3 for the Lady Cats. Lydia York made a steal and Kyle cashed in to make it a two-possession lead with 2:32 left to play. 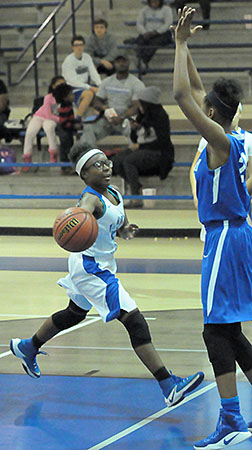 Tierra Trotter tries to bounce a pass past a Conway Blue defender. (Photo by Kevin Nagle)

Conway Blue led 12-9 at the end of the first quarter. Russ opened the second-quarter scoring with an offensive-rebound basket. After Pickens scored, Russ grabbed a rebound and scored again to make it 14-13.

Off a Lady Cats’ turnover, Trotter scored to give the Lady Hornets the lead. Pickens tied it with a free throw, 15-15, then neither team scored for a while as each ratcheted up the defense.

With 1:41 left in the half, Martin converted both ends of a one-and-one to give Bryant the upper hand. Following a Conway Blue miss, Russ added a pair of free throws. And when Taylor knocked down a pair of free throws with :37.5 left, the Lady Hornets had their largest lead of the game, 21-15.

McMillan was, however, fouled at the buzzer and trimmed a free throw off the margin with no time on the clock.

York hit a layup and Pickens drained a 3 to bring the Lady Cats even 21-21 at 4:03 of the third quarter. Conway Blue had a chance to take the lead but suffered a turnover. Russ fed Taylor for a layup and the Lady Hornets were back on top.

Martin followed her own miss to made it 25-21. Kyle hit a running jumper only to have Taylor score at the other end at the 1:53 mark of the third quarter. Incredibly, it was Bryant’s final field goal in the game.