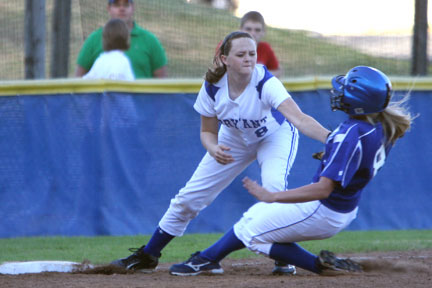 Sometimes, when you climb the mountain, if you don't get over the top you wind up sliding back down.

The Lady Wampus Cats scored three times in the top of the eighth then turned a double play in the bottom of the inning — their fourth of the game — to take the starch out of another Bryant comeback bid and extract a 6-4 extra-inning victory at Lady Hornets Field.

It was the first loss in three 7A-Central Conference games for the Lady Hornets who were set for another league tussle at Cabot on Thursday, March 19.[more]

"We got things rolling for awhile but then we made some mistakes that cost us in extra innings," she added.

Conway jumped to a 2-0 lead in the first. Bailey Prout slapped a triple on the second pitch of the game and scored when the return throw from the outfield was off target. Nikol Damengeaux followed with a single to center, anyway. 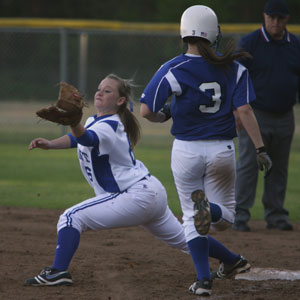 Bryant's senior pitcher Christen Kirchner struck out the next two batters and had a 1-2 count on J.B. Davis. After fighting off a delivery, however, Davis belted a double to drive in the second run.

Kirchner settled in at that point and retired 14 in a row but, on offense, the Lady Hornets weren't having much better luck. Conway pitcher Kayce Moore issued walks to freshman Cassidy Wilson and Kirchner in the bottom of the inning but got out of the jam with a strikeout to keep it 2-0.

That was the first in a string of seven straight she set down before freshman Kayla Sory cracked a single to center to open the home fourth. Kirchner sacrificed Sory to second then Jessie Taylor, another freshman, lifted a fly to right. Sory tagged and tried to advance to third only to be thrown out to end the inning.

In the fifth, senior Sarah Hart belted a one-out double. Sophomore Lana Naumann followed with a sacrifice to move courtesy runner Kelsie Works to third. Hoping to surprise the Lady Cats, Stanfield had Works round third and sprint for home but Conway reacted and second baseman Kristen Shock, who had covered first, threw home in time for the third out.

Domengeaux finally snapped Kirchner's string with one out in the top of the sixth, cracking a triple. Shock followed with a sacrifice fly and the Conway lead was 3-0.

The Lady Hornets began their comeback in the bottom of the inning. Senior Paige Turpin lit the fire by reaching on a one-out error. Cassidy Wilson belted a double to send her to third and Sory delivered the run with a sacrifice fly. Wilson tagged to go to third on the play but, on appeal was ruled to have left the base too soon, resulting in the third Conway double play, ending the inning.

Davis singled to open the top of the seventh. Moore sacrificed her to second but when the courtesy runner tried to go to third on Mandy Eggert's tap back to Kirchner, she was thrown out. Chelsea Cowles bounced out to Naumann at second and the the Lady Hornets came in to continue their rally. 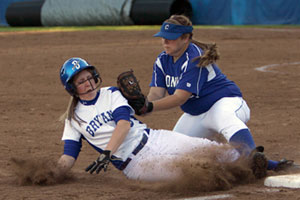 A single by Kirchner got things started. She advanced all the way to third when the ball was misplayed in the outfield, then scored on a single by Taylor. Ninth-grader Peyton Jenkins grounded into a force at second but Hart worked a walk and, with two down, freshman Jenna Bruick came through with the game-tying single to center, bringing in Works who was running for Jenkins.

With the potential winning run at second, however, Moore kept her team alive with a strikeout.

Cowles started the eighth at second (per the international tiebreaking rule) and Jordan Yandell sacrificed her to third. Prout brought her home with a double, snapping the tie. But Prout scored moments later when Domengeuax's fly to left was misplayed. With two down, Natalye Chudy hit a grounder to Taylor at third who went to the bag for what she thought was a force out to end the inning. But no force was on and both runners were safe. The next pitch, Davis singled to make it 6-3. Kirchner struck out Moore to end the inning.

Turpin started at second for the Lady Hornets in the bottom of the inning and Cassidy Wilson singled her to third. She scored when Sory reached on an error.

So, the Lady Hornets had the tying runs on base but Conway turned a doubleplay when Kirchner bounced to Domengeaux at short. Though Wilson reached third, she got no further as Moore induced a fly to center from Taylor that ended the contest.

The Lady Hornets take a 3-3 overall mark to Cabot. They're set to host Sheridan on Friday.