Bryant’s Tyler Green was the only golfer to shoot under par but all four of the[more] scoring golfers for the Conway High School boys team shot under 40 in the nine-hole competition and the Wampus Cats took team honors over the Bryant Hornets and Little Rock Central at Hurricane Creek Country Club on Thursday. 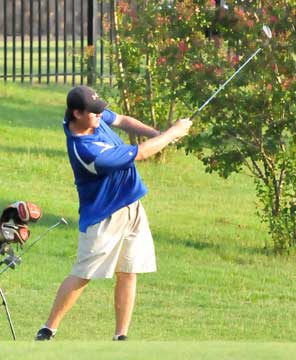 Conway also took top honors in the girls competition behind individual medalist Summer Roachell, who shot a four-under 32. Bryant’s Peyton Weaver carded a 39, the only other round below 45 among the ladies.

Green fired a two-under 34 with birdies on the second, fifth, eighth and ninth holes and despite bogeys on both the par 5 holes, three and seven.

Austin Harmon and Conway’s Parker Rice carded one-over rounds of 37. Harmon knocked down a birdie putt on the fifth hole.

Ashton Green and Ross Weaver both shot rounds of 40 for the JV. Nick Jenkins finished at 43, Mark Winn at 44. Luke Brantley and Allen Humbard turned in rounds of 47 with Logan Moore finishing at 53.

For the Lady Hornets, Savanna Cathey shot a 49. Peyton Jenkins finished at 52 and Carley Miller at 53. Kaylee Newell turned in a 66 and Tiffany Robinson shot 69.

The Bryant girls returns to competition on Tuesday, Aug. 30, at First Tee in Little Rock. Both teams will host a match at Hurricane Creek on Thursday, Sept. 1.