“It’s the first time I’ve ever scored one run in two games and didn’t lose,” declared Bryant Black Sox coach Darren Hurt after his team completed its second game of the day in the Bauxite Tournament on Saturday.

The Sox’s first game finished in a scoreless tie. In the second, Dylan Cross and Quinton Motto combined on a two-hit shutout and Bryant eked out a run for a 1-0 win over the Little Rock Continental Express Junior team.

The tournament is being played with wooden bats, which limits the offense. The sweet spot on a wood bat is probably less than half the size of the much more forgiving metal bats that most amateur teams use normally. So the games often boil down to which team pitches best, which one avoids defensive mistakes, limiting their opponent’s opportunities.

Besides allowing just two hits, between them, Cross and Motto didn’t walk anybody. Cross hit a batter.In all, Bryant pitchers threw 13 scoreless innings in the two games.

“The pitchers threw well today,” Hurt acknowledged. “I think the highest pitch count was 42. Every one of them was effective. The defense played well too.”[more]

Indeed, the Sox only committed one error in the two games combined. 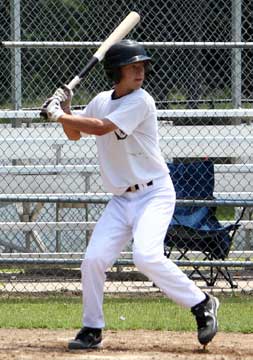 The lone run of the game came in the top of the fifth when Lucas Castleberry led off with perhaps the hardest hit ball of the day, a shot to left center that went for a double. A wild pitch got him to third and, on a 2-0 count, Evan Jobe pushed a bunt up the first-base side on a safety squeeze. Castleberry scored with ease as Jobe was retired at first.

“We made a couple of base-running mistakes that really cost us in the first game and you’ve got to get the bunts down,” Hurt emphasized. “You’re playing with the wood bats and it changes things. You’ve got to play small ball and you’ve got to execute. It went better (in the second game) and Jobe steps up and lays a perfect safety squeeze down and that’s how we end up getting the victory.”

The Sox were set to play Sheridan on Sunday at 6 p.m. to complete pool play. The two two teams from each of the two pools advance to a four-team single-elimination tournament on Monday to determine the champion of the tourney.

Continental right-hander Hayes Riser and Cross dueled early. After Riser pitched a 1-2-3 first, the Express managed to get a base runner as far as third for the only time in the game in the bottom of the inning. Daniel Imbro reached on the lone Bryant error of the day, took second on a balk and third on Josh Alberius’ bouncer to second. But Cross struck out Logan Hayes and got Jacob Green to ground out to Castleberry at short to end the threat.

Continental had only one other batter get on base in the three innings that Cross pitched. Landon Pickett helped him out with a sparkling play at third in the second. In the third, Cross had retired the first two and had a 1-2 count on Imbro when he hit him. But he came back to strike out Alberius to end the inning. 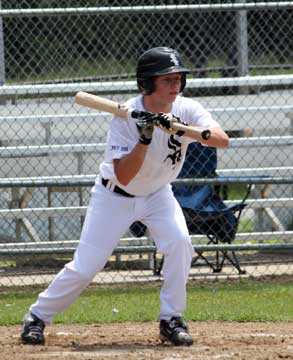 Meanwhile, the Truckers erased a walk to Cross in the second with a doubleplay. In the third, Blake Davidson, batting in a game for the first time since last summer’s Legion season, beat out a chopper through the middle for the first hit of the gam

e. Ozzie Hurt sacrificed him to second but he could get no further and Riser wriggled off the hook.

In the top of the fourth, Pickett stroked a single to left with one down but Continental turned its second doubleplay.

Motto took over for Cross in the bottom of the inning and, again, Pickett ranged far to his left to make a nice play, retiring Hayes for the first out. Jacob Green then broke up Bryant’s no-hit hopes with a single to left. But Chris Joiner, in a rare catching assignment, threw Green out trying to steal. Pickett made another nice play at third and Davidson went high at first to grab his throw and swiped a tag on Corbin Knell to end the inning.

That started a stretch in which Motto retired seven straight with Jobe making a splendid running catch near the line in right for the final out of the sixth.

Bryant’s scoring at bat came in the fifth. After Jobe drove in the run, Davidson collected his second hit but was stranded.

Riser pitched around an error in the top of the sixth and worked out of jam in the seventh. With one out, Castleberry walked, Jobe reached on an error and Davidson was intentionally passed to load the bases. But a strikeout and a groundout followed as the score stayed 1-0 going into the bottom of the seventh.

An infield hit by Hayes gave Continental some hope. He advanced on a wild pitch to get into scoring position. Green then grounded to Castleberry at third. He looked Hayes back to second then threw to first. On the throw, Hayes broke from second but when the play was handled cleanly by Davidson, he proved to be too far off the bag. Davidson threw to Hurt covering second for an unconventional doubleplay.

Motto then got Knell to fly to Trent Rivers in left to end the game.