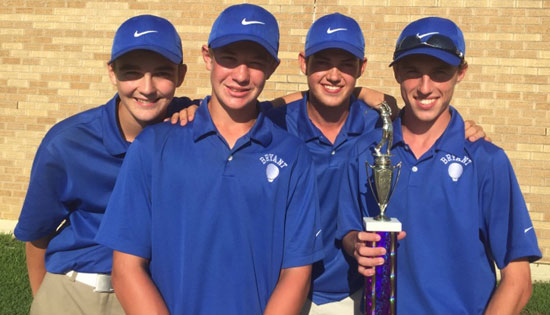 Individual medalist was White Hall’s Josh McNulty, who turned in a round of 71. His teammate Grayson Martin carded a 72 with Bryant’s duo of Darbonne and Schmidt tying for third.

“They did a great job of driving the ball straight,” Bryant coach Steve Griffith said of his golfers. “El Dorado’s an old course with lots of large oak trees lining the fairways. It puts a premium on hitting the ball straight. They gave themselves a shot by staying in play off the tee then pitching and scrambling up.”

Brendan Morton turned in a round of 84 for the Hornets with Tanner Caton at 85.

For the Lady Hornets, Maddie Stephens finished at 118 and Brooklyn Waller at 127. A player short, the Bryant girls didn’t have enough to compete for the team title, which was captured by El Dorado. Lakeside’s Gracen Blount was individual medalist with a round of 88.

“The girls competed well,” Griffith said. “Our third girl that we have on the team was on vacation so we missed her. I think if she had been there we would’ve been right there for second or third.

“Everybody did a good job of contending with the heat,” he noted.

“It was a fine way to start the fall season,” the coach mentioned. “They’ve all been competing in tournaments and playing lots of golf throughout the summer.”

Bryant will return to competition on Thursday at the Charging Wildcat Invitational at The Greens at North Hills Country Club in Sherwood.