Dealing with the heat 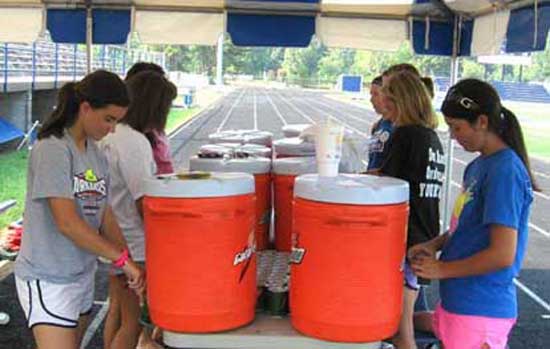 With record heat in the state including a high of around 110 or more in Bryant Wednesday, the timing of[more] the implementation of State Act 1214 has been impeccable. 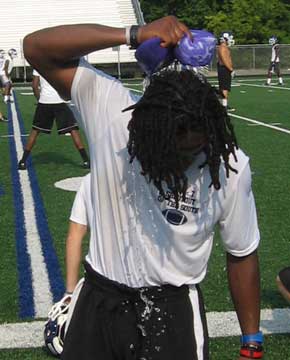 The legislation is designed to protect the safety of students in public schools who are, in particular, involved in athletics.

At Bryant High School Stadium, the heat index on the artificial turf has been measured as high as 118 degrees by the end of the morning workouts. When it got to that point, the football team was pulled off the field. The team takes more breaks, usually about every 30 or 40 minutes. Players are given unlimited access to water and along the sideline, ice chests are stocked with ice sponges for the players to use to cool down quickly.

In fact, as part of the Act, the maximum length of any single practice is three hours with at least a one-out break before resumption.

There were already a lot of precautions in place at Bryant but, said head football coach Paul Calley, “We’ve taken it one step farther.

“We’re done before it gets really brutal,” he noted. “Now when it gets close to 10 o’clock, their feet start burning. If they have black-soled shoes, they’re feet really get hot and you can see them picking their feet up, dancing around. It does get warm. But, as far as just the air temperature and being out in shorts, it hasn’t been that bad.” 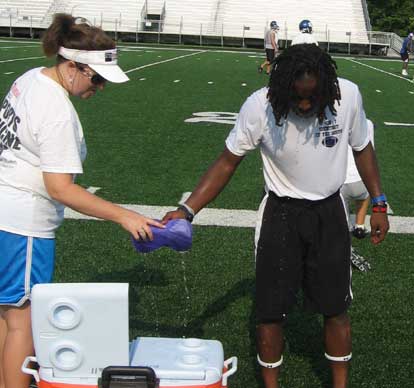 Of course, things change a bit when the work in pads begin today. In fact, they’ll start and end practice an hour earlier.

“We’ve implemented a lot of things,” said Christa Finney, the athletic trainer at Bryant. “We have started doing weight charts in the morning. The athletes come in. They weigh in before practice. They weigh out as soon as they come out of practice and, the next morning, whatever weight they lost they have to be back up within three pounds of that original weight. If they don’t, they’re sitting on the sidelines and they’re hydrating or they’re eating until they get back up to weight. Otherwise, they’re going to be a whole lot more susceptible to heat injury.

“Something new that we’re doing is immersion tanks,” she related. “If we have an athlete that goes down with severe heat exhaustion up to exertional heat stroke, we’ll get them in that tank and we’ll throw the ice in on top, get that water circulating. 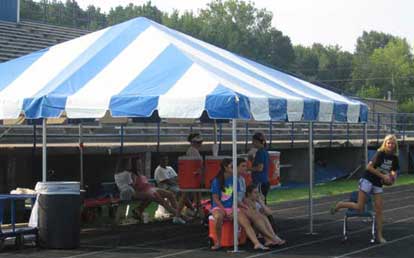 “There’s a huge difference between exertional head stroke and passive heat stroke,” Finney explained. “Exertional heat stroke, we’re talking about fit athletes, athletes that have been trained, that have started exercising in the heat and their core body temperature’s risen to the point that they can’t combat it anymore. So, the best way to get that body temperature down is cold water immersion. So we have these two 150-gallon tanks.

“The big push this year with the Arkansas Athletic Trainers Association — we’ve worked very closely with the State Legislature and the AAA (Arkansas Activities Association) and with the Arkansas Ambulance Association to get everybody on board with the principle of ‘cool first, transport second,’” she continued. “We had a meeting with the local EMS. We met with the police, fire and with ambulance, just to make sure we’re all on the same page, that everybody understands our emergency action plan. They have a copy of it on file. So they know, if we’re out there and we have an emergency, we’re going to get that body temperature down and then we’re going to take them to the hospital. 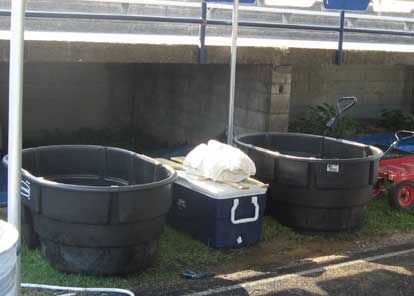 “That’s another part of 1214 that we had to implement this year — we’ve always had it in place — was every sport, every venue has to have an emergency action plan,” Finney noted. “So I spent a good deal of the summer re-writing our athletic emergency action plan, just to be more specific to the venue and the sport.”

The tanks can also be used after practice.

“The players are welcome to get into one of them,” Finney said. “We dump ice in them after practice. They can come sit in it for a couple of minutes. It has gone such a long way in helping them get their legs back under them for the next day.”

“The buckets for the ice bath, having the ice ready, the tent,” Calley listed. “We’d like to get a misting fan at some point. With all the purchases we’ve had to make additionally, a misting fan right now is not possible through the school. So we’re hoping to get some private funds and maybe through the booster club, we can get a misting fan for Friday nights especially for these guys that are having to go both ways.”

Preparation away from the field has been part of the program too.

There have also been mandatory meetings with parents to let them know what the program involves.

“We went over proper nutrition because recent studies have shown that nutrition is just as important in staying hydrated and staying healthy out here in the heat as hydration is,” Finney said. “The kids have to be accountable too. We depend on parents at home, making sure they’re drinking and eating properly, making sure they’re not staying up until 2 o’clock in the morning, staying away from the energy drinks.”