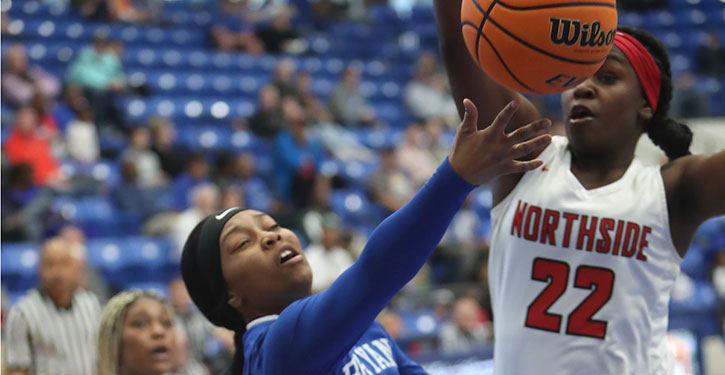 The defending Class 6A State champion Fort Smith Northside Lady Bears, after going undefeated through the 6A-Central Conference during the regular season, were in a battle on Friday against the Bryant Lady Hornets. It was the quarterfinals of the 2020 State tourney at Hornets Arena and the Lady Bears’ debut at the event. Bryant, which was a five seed from the Central, had opened the tournament with a win over Rogers on Wednesday.

With 1:12 left in the first half, Bryant’s senior guard Lexie Taylor followed her own miss with a jumper in the lane that gave her team its first lead of the game, 25-24.

The Lady Hornets had been close the entire half, after falling behind 7-2 initially.

Northside’s 6-2 post Tracey Bershers got free inside for a basket as she was fouled with :55 left in the half. Though she missed the free throw, the Lady Bears were back up 26-25.

Taylor missed a 3-point try on Bryant’s end then, with around 40 seconds left in the half, India Atkins was guarding Northside’s all-world 6-4 junior guard Jersey Wolfenbarger, who was the MVP of last year’s State finals as a sophomore. It seemed obvious that Wolfenbarger, while handling the ball, pushed Atkins away with her lead arm. Atkins went to the floor.

Everybody expected an offensive foul call against Wolfenbarger. But there was no call. The Lady Hornets on the bench had, at first, jumped up to celebrate their teammate’s defense but when there was no whistle, they protested.

It wasn’t an overly demonstrative reaction but an official under the basket didn’t like it and called a technical foul, another in an alarming rash of such calls at this year’s State tourney.

So, not only were the Lady Hornets denied the offensive foul and possession of the ball with a chance to take a lead into halftime, Northside was able to go to the line to increase their advantage without running any more offense. Bershers canned both free throws and it was 28-25. Plus, the Lady Bears were awarded the ball for a chance to increase the margin further.

Bryant’s Tierra Trotter made a steal to deny them but a missed shot at the buzzer left it a three-point game at the half.

Lady Hornets head coach Brad Matthews admitted he never got an explanation for the call. But it seemed to loom large when, to start the second half, Northside, behind Wolfenbarger, surged while the Lady Hornets went cold.

The Lady Bears outscored Bryant 21-5 in the quarter on their way to a 66-44 victory as they advanced to the semifinals.

“That didn’t lose us the game,” Matthews said of the technical.

“But, in the big picture, I was so proud our kids in the first half, to get it to halftime in the game,” the coach asserted. “I mean, they have so many great players over there. It’s just one weapon after another. Our kids fought and clawed and scrapped to stay in there.

“We came out and missed a couple of shots in the third quarter. They make a couple and you can kind of feel the air go out of us. They took advantage of some stuff that we didn’t do right. Give them credit. They’re going to be a tough out.

“I told our kids, losing’s no fun,” Matthews continued. “There’s no way to sugarcoat losing. But, at the end of the day, there’s only four teams further than we are and three of them are going to get beat just like we did.”

Bryant shot the ball well enough to stay close in the first half. But, in the second half, they were just 7 of 29 including 1 of 14 from 3-point range. When they’ve been successful this season, the Lady Hornets counted on some 3’s to get it done.

Bryant finished with five triples, but they took 31 tries and three of their makes were in the first quarter, enabling them to keep it close.

After falling behind 7-2, McKenzie Muse hit a pair of 3’s and Trotter found her range to beat the buzzer as Northside held a 14-11 lead.

Haitiana Releford scored inside to start the second period but a free throw by India Atkins and a steal with layup from Trotter had Bryant within 2.

Jazzlyn Coleman countered with a 3 but Trotter hit a driving jumper then India Atkins scored again to make it 19-18.

Wolfenbarger drove for a basket and Relaford hit a free throw but India Atkins hit a 3. After Wolfenbarger scored again, Muse hit the offensive boards for a basket. A turnover led to Taylor’s go-ahead basket.

To start the second half, Wolfenbarger and India Atkins traded buckets before Northside put together a 13-1 run.

The Lady Hornets never quite recovered. They went over five minutes without a field goal. Parris Atkins drove for a basket to end the drought at the 1:57 mark of the third, cutting the Lady Bears’ lead to 13.

But Northside scored the next 8 points to stretch the lead to 21. Their largest margin was 24.

Trotter scored 17 for Bryant but needed 20 shots to get that. Muse had 11 points and a team-high seven rebounds.

“I was so proud, with his new arena — the way our kids played in this arena was special,” Matthews reflected. “To beat Cabot, to beat North Little Rock, the way we played against Benton. We had Conway on the ropes and had Northside on the ropes. I think it’s a tribute to the arena, to the community and the excitement our kids felt.

“Our seniors had a really good two-year run,” he said. “To win games in back-to-back years at the State tournament hadn’t happened, I don’t think, in a while. That’s a tribute to them and all the work they put in over the course of the last five or six years to get to that point.

“I’m disappointed that we lost,” the coach concluded, “but, as you take a step back after you lose and look at the big picture, there was a lot of good things.”