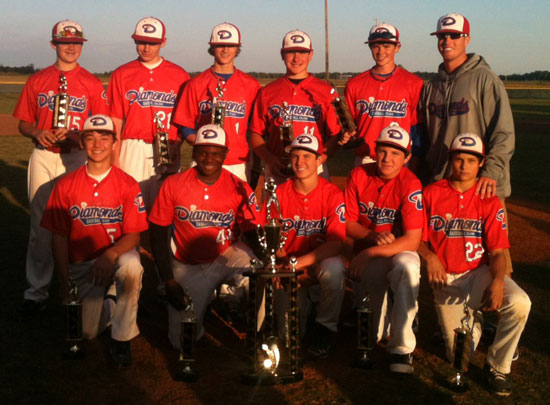 The Diamond Baseball Club 14-under AA team won the "Get You Some More" tournament[more] that was held in Lonoke, April 21-22.

On Saturday, the team racked up 25 runs against the Arkansas Slyders and the Arkansas Tusk. They beat the Slyders 10-4 and run-ruled the Tusk 15-0.

On Sunday, they re-matched the Tusk at a closer victory of 4-2 and went on to the championship game against the Slyders who beat out the Arkansas Thunder in the semi-finals.

DBC scored four runs in the first, three in the third, five in the fourth and one in the fifth to end the game at 13-5. A walk-off base hit in the bottom of the fifth sealed the deal.