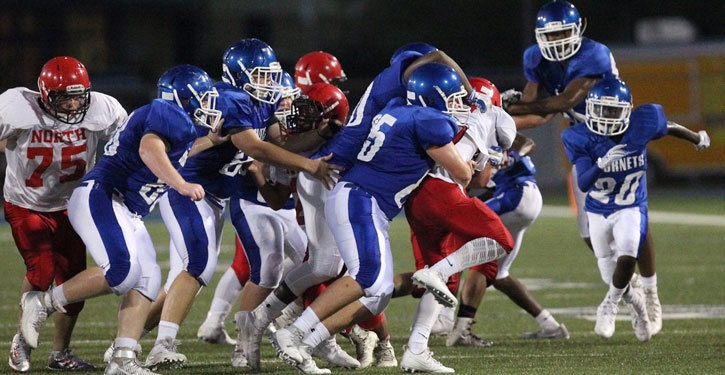 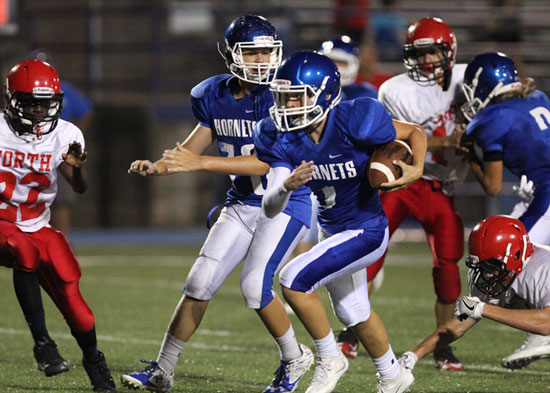 Jake Meadows (1) breaks a run with the help of a block from Emil Pritchard (70). (Photo by Rick Nation)

In a freshman game with eight-minute quarters, it takes some doing to score 29 points in a quarter. But that’s just what the Bryant Hornets did Thursday night to open the game against the Cabot Red Panthers.

On the way to building a 35-6 halftime lead, the Hornets scored every which way. The lead enabled head coach Kenny Horn to play reserves the entire second half. Cabot Red put together a pair of patented lone grinding scoring drives in the second half to make the final score 35-20.

The win improved the Hornets to 2-0 overall. It was their first Central Arkansas Junior High Conference victory. 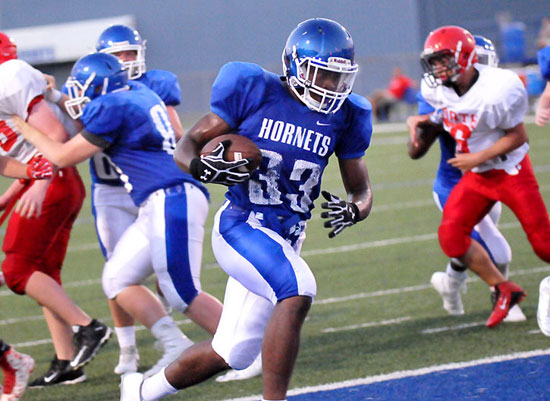 Ahmad Adams scored a touchdown to cap off the first series of Thursday’s game. (Photo by Kevin Nagle)

The early barrage against Cabot Red began innocently enough. The Hornets drove 65 yards in nine plays capped off by a 5-yard burst by Ahmad Adams. The tailback would run the ball just four times for 92 yards and two scores in just the first four minutes of the game.

His 20-yard jaunt on the second play of the game set the tone. Jake Meaders completed a short pass to Jaeger Burks then Adams dashed 11 yards to the Cabot Red 30. He then caught a Meaders throw for another 8 yards. 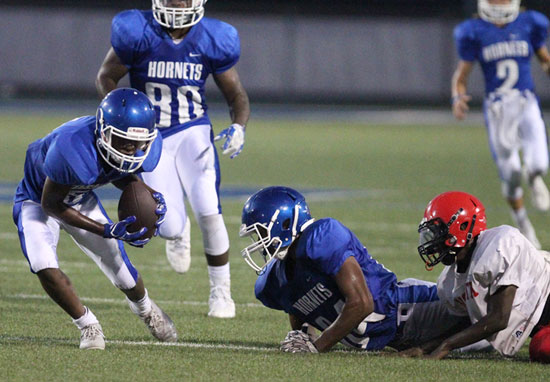 Meaders kept for 3 yards to get a first down at the 19. Another keeper picked up 6 stripes and another pass to Burks set up Adams’ TD.

But it looked like it was going to be a scoring fest when Cabot Red, on its first snap of the game, gave it to Jaylon Toney who went 75 yards for an answering touchdown. Though the extra point attempt failed, it was 7-6.

“They popped us one real quick,” Horn noted. “One mistake against them, one guy does one thing wrong and it’s a touchdown for them. That’s what happened. We changed personnel right there, got a few things fixed and stopped them the first half.” 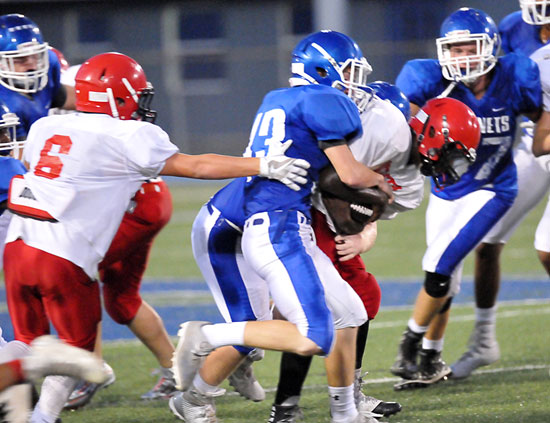 Tristan Sehika (43) leads the charge on a tackle. (Photo by Kevin Nagle)

In fact, the Panthers didn’t manage another first down until Bryant had established its 35-6 lead.

Adams’ last official carry of the game came on second down from the Bryant 44 with just over four minutes left in the quarter. He crashed and dashed 56 yards to his second TD.

Adams added a run for two.

But to plays into Cabot Red’s subsequent series, the Panthers faced a second-and-8 at their own 37. They tried to run the option but the pitch didn’t reach its mark. Toney tried to get back on it only to have Bryant’s Christian Cain scoop up the loose ball and dash into the end zone.

Though the try for two failed, there was still 2:40 left in the opening period and the Hornets were up 21-6.

The Panthers went three-and-out and, from their own 40, Colton Matherly dropped back to punt. But the snap was bad. Under pressure, Matherly scrambled but to no avail. Austin Bailey pulled him down at the Cabot Red 31.

That’s where the Hornets took over. On first down, Meaders kept for 13 yards. On the next play, he found Gavin Wells in the left flat. Wells turned it up the sideline and sprinted to the end zone as the horn to end the first quarter went off.

Adams ran in the conversion to make it 29-6.

Cabot Red’s next try came from its own 23. Tackles by Bailey and Ryan Riedmueller left the Panthers facing a fourth-and-5 at their 28. Matherly came back in to punt but this time, Bryant’s Cantrell Wallace broke through, blocked the kick and fell on the loose ball at the 17.

Meaders scored from there on the very next play. Though the extra point was blocked, the Hornets had their 35-6 lead with 4:56 still to play in the first half.

The Panthers proceeded to put together a vintage Cabot drive, eating up the final 4:46 of the half. But they were stopped and ran out of time once they reached the Bryant 32.

“Anytime you can get your defense to score against Cabot, that’s like an extra possession,” he added. Many times, with the Panthers time-eating offense, the number of possessions for the opposition is whittled way down.

Horn had been concerned about his offensive line coming into the game.

“We looked pretty good tonight,” he stated. “I don’t know how well we did up front. We’ll have to look at the video. But I think we did pretty good, a lot better than we did last week. I think we cleaned some stuff up and I think it showed.”

The Hornets were limited to just two possessions and a victory play on a third in the second half. Cabot Red drove for a score on the opening series, sparked by a 58-yard run by Graham Turner. The Panthers reached the 7 but had to use four plays to get into the end zone. Turner got the TD on a fourth-and-inches at the 1. So it was a good defensive stand by the second-team defense for Bryant.

Cabot’s second possession ended abruptly when Turner fumbled on a second-down run at the Panthers’ 33. Riedmueller recovered for Bryant, which struggled to move the ball against the Cabot Red first-team defense.

The Panthers got the ball back at its own 28. There was 7:12 left in the game at that point. In 13 plays, they drove to paydirt. Turner again scored from the 1. By that time, however, there remained just 42 seconds in the game.

Matherly booted the extra point to set the final score. 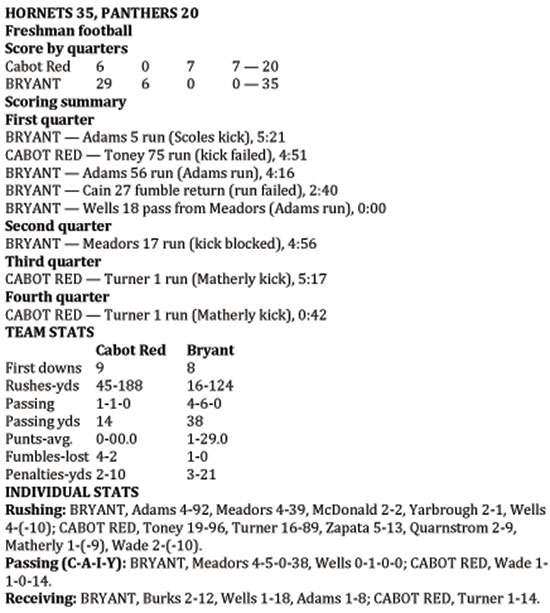