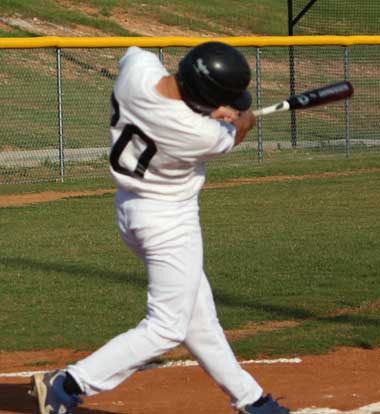 SHERWOOD — Josh Pultro hadn’t hit in a game since the last Bryant High School junior varsity game on May 10.

Tanner Tolbert hadn’t hit in a game since he was playing Babe Ruth ball two summers ago.

Both stepped to the plate on Tuesday night in the Bryant Black Sox Junior American Legion contest against the Sylvan Hills Bruins and hammered the ball. Pultro went 2 for 2 and drove in three runs while Tolbert went 2 for 3 with an RBI in a 13-4 romp in four innings.

Dylan Cross shut out Sylvan Hill on two hits in the first pair of innings, giving way to Quinton Motto who closed the game out. 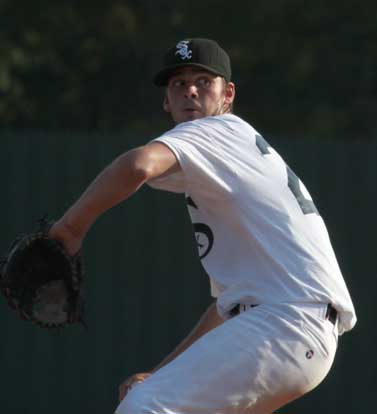 The Junior Sox improved to 2-1-1 on the season going into a home game against Lake Hamilton on Wednesday night.

Bryant jumped to a 2-0 lead in the first. Joiner ripped a double off the top of the fence at the revamped Kevin McReynolds baseball complex. Hurt sacrificed him to third and, after Lucas Castleberry walked, Pultro socked the first pitch he saw to right for an RBI single. And, after Castleberry and Pultro worked a double steal, a passed ball allowed the second run to score before Sylvan Hills starter Lance Hunter ended the inning with a pair of strikeouts.

Those were the last outs Hunter would manage. Motto opened the second with a walk to bring up Tolbert who smacked a 2-2 pitch on a line to center for a single. Mayall then reached on an error that allowed Motto to score. And when second base was left unattended, Mayall sprinted in to put runners at second and third.

Mayall was playing in the Junior game in order to get some defensive work at third base a position he hasn’t played since last summer due to a shoulder injury suffered during football season last fall. He had served as the designated hitter all through Bryant High School’s run to the State championship, leading the team in hitting. He batted ninth in the game but was in the middle of two of the scoring uprisings. 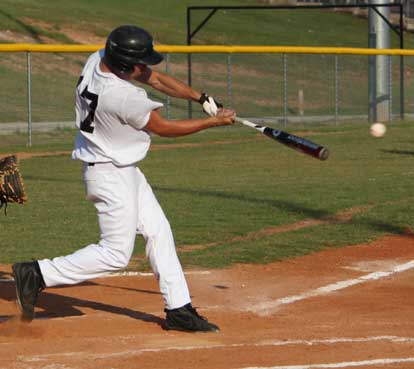 Joiner drew a walk to load the bases then Hurt drew one to force in Tolbert, making it 4-0.

With the bases still full, Bryant coach Darren Hurt put on the squeeze play as Hunter returned to the wind-up instead of the stretch. Mayall got a great break but Castleberry fouled off the first pitch. It was, in fact, such a great break that Hurt called for the straight steal on the next pitch. Again, Mayall got off to a fast start down the line. Castleberry took the pitch and Mayall slid across the plate without even an attempt at a tag by Bruins catcher Dalton Freeling.

Joiner and Hurt then worked a double steal and when the throw to third was wild, Joiner scored.

Castleberry walked to bring up Pultro who plugged the gap in right-center for a two-run double and an 8-0 lead.

Lefty Aaron Sarna relieved Hunter at that point and he got the first out of the inning when Rivers flew to center. Pultro tagged and went to third on the play. Evan Jobe was hit by a pitch to bring up Motto who got a squeeze bunt down that got Pultro home. Jobe, who took second on the play, raced home when Tolbert cracked the very next pitch for a single to left-center, making it 10-0.

Cross to that point had pitched around a single by J.D. Miller and a two-out walk to Sarna, striking out the side in the first. In the second, Blake Hill doubled but, after Brandon Farrow tapped back to the mound, Cross picked him off. The right-hander’s fourth strikeout ended the inning.

Mayall slapped a single to left to start the third. Joiner walked and, after both moved up on a passed ball, Castleberry lifted a fly to right that would’ve been good for a sacrifice fly. But it was dropped. Mayall scored, Joiner advanced to third and Castleberry hustled into second.

Pultro was hit by a pitch to load the bases for Rivers, who stroked a single to left to drive in Joiner. And when the ball was misplayed in the outfield, Castleberry sprinted home as well, making it 13-0.

Motto struck out a pair in working around a two-out infield hit and a hit batsman in the fourth. In the fifth, however, Conner Eller singled to start the Bruins’ four-run uprising. Robert Shock walked and, after Motto struck out Farrow, Greg Atchison doubled in a run.

Ryan Brisco chased in Shock and Atchison with a double. He would score the fourth run on a single by Andrew Terry but Freeling hit a hump-backed liner to Hurt at second and he doubled off Terry to end the game.