Ask most football players what their favorite part of the game is and they will invariably tell you the same thing:

Taken out of context, that doesn’t sound so good but, hey, it’s football.

“Hitting people” is a huge part of the game and it’s appeal.

So, it’s not surprising that the enthusiasm at the Bryant Hornets’ fall workouts ratcheted up quite a bit on Thursday, the team’s first day in pads.[more] 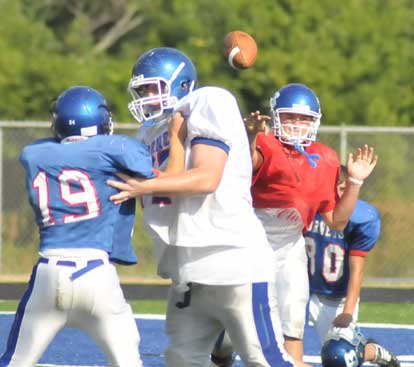 “That was the medicine that we needed,” acknowledged head coach Paul Calley who had expressed a desire for a greater “sense of urgency” from his team after Wednesday’s practice in shorts and helmets. “It was a much better today. The concentration was much better. The enthusiasm level was better. It was a much improved overall effort this morning.”

He said his seniors provided the spark.

“They came ready to practice. And when your seniors come ready to practice, everybody else follows suit usually. Those guys were ready today and I was pleased with their effort, pleased with the way they handled themselves.“I didn’t really say anything to them yesterday about being disappointed,” Calley added. “I told them after practice, ‘I bashed you yesterday in the (BryantDaily.com) article.’ I said, ‘You guys picked it up.’ So I was proud of them.

“We’re going to go as our seniors go. We’ve got 36 of them,” he asserted. “Usually, when you have that many, people expect you to be good and I expect us to be good. I’ve had a lot less. If you can put 17- and 18-year-old young men out on the field, you’ve got a better chance to win.” 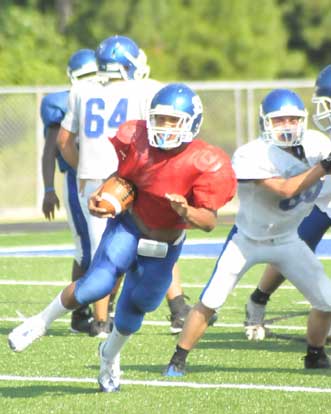 It didn’t take long for Calley, who coaches the offensive line, to notice a difference. “It was with my group,” he related. “We went through our pre-practice drills focused. We did everything with more focus today. I knew after the first 15 minutes, it was going to be a different practice today. And I guess pads were what did it. They were just looking forward to getting in pads.

“You know, we go all summer, and a football player looks forward to the contact,” he reiterated. “That’s the fun of it.

“Defensively, that’s always an important thing,” added Steve Griffith, the team’s defensive coordinator and linebackers coach. “There’s just a limited number of things we can do in shorts. And the kids responded really well. It was hot but I thought we had a lot of energy. The inside drill, you could tell they were excited. We had the first defensive group going against the first offensive group and they responded very, very well.”

It helped, too, that practice began an hour earlier (at 7 a.m.) when the temperature was several degrees cooler than the blistering heat later in the day.

“It was about 25 degrees cooler this morning,” Calley said. “We got a lot of the hot work done early. So I think that helped some too.”

The heat is still a factor, however.

“We conditioned a little bit today after practice but we saw some signs of dehydration before we were through. Even me. I’m about dehydrated.”

That’s despite the fact that the team has been going through the water. Calley said on Wednesday, they went through about 80 gallons during the three-hour practice. He suspected they used less on Thursday but not much less.

“There’s a lot of fluid loss even today with it being a lot cooler when we started.”

One thing about the heat is that it should help conditioning especially if the first third of the season proves to be hot as is often the case.

In a rundown of the day’s work, he said, “We started out with two group periods. Right now, we’re working with a primary and a secondary group where we’re getting people on both sides of the ball. We went one-on-one, d-backs versus receivers, and offensive line versus defensive line for 15 minutes. Then we went to an inside drill and a pass skeleton, took two 15-minute periods, offensively and defensively. Then we went into the primary offensive team, went to a couple of special teams, went back to primary defensive team. We kind of ran out of time then. I threw another break in there because we had some guys — you could tell they were starting to drag a little. Then we did our conditioning.” 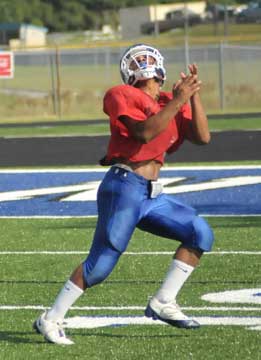 On Friday, Calley said, “We’ll start practice basically the same. We’re going to go with two group periods. We’re going to have the pass skel/inside period, probably a one-on-one period but what we’re going to do, instead of going against the scout team, we’re going to go ones-versus-ones. You cannot simulate the speed of the game unless you go best-versus-best. That’s the only way you can do it.

“That will set us back offensively,” he noted. “The defense is going to be fast. Offensively, after the first hour, your linemen start to tail off a little bit. The defense will probably get the better of us tomorrow but that’s what we need to see.

“We looked better throwing and catching today. We’re still not where we need to be,” Calley concluded.

Regarding the defense, Griffith said, “One of our main objectives right now is developing depth. With the heat, we need to be at least two deep, preferably three deep at each position. We can go all the way back to Labor Day of 2002 when we played in the Hooten’s game (against Shiloh Christian) and it was so hot we played 35 kids on defense that day. So, we’ve got to try to have kids prepared in these early-season games, get some guys on the field that can give the starting guys some break without a big drop-off.

“That’s our big challenge over the next five weeks,” he concluded. “Bring the first group to a higher level and then closing the gap between our second and third groups and the first group. Hopefully, they’ll take on the challenge of getting on the field. It’s too much hard work not to try to get on the field.”