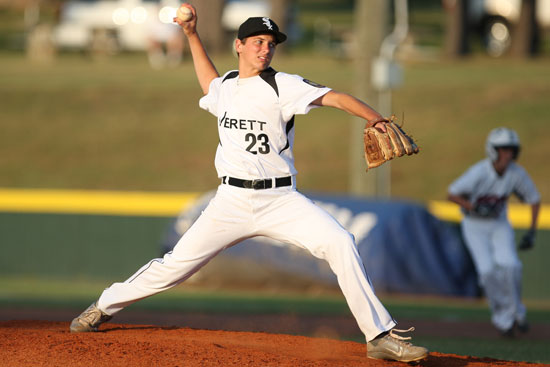 Until they got the bats going, the Everett Black Sox AA American Legion team of Bryant was willing to[more] scratch out whatever they could offensively. And they were able to put together a 3-0 lead in the first two innings on just one hit. A five-run fourth blew the game up and the Sox earned a 9-1 win over the Benton Sport Shop Junior team at Bryant High School field Wednesday night. 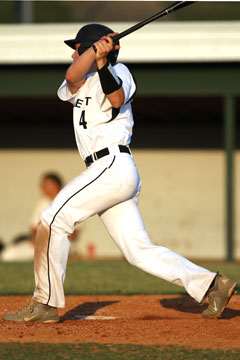 Jason Hastings and Trevor Ezell each had two hits in the game as the Sox improved to 2-0 on the season. Ezell, who was on base all five times he came to the plate in the team’s opener at Hot Springs Village, reached in three of his four plate appearances as the Sox lead-off man against Benton.

Hastings and Chase Tucker each drove in two runs and Cody Gogus was on base three times.

On the mound, the trio of Zach Cambron, Justin Emmerling and Devin Dupree combined to limit Sport Shop to just two hits in the five-inning contest.

Cambron shut out Benton over the first two innings, though he allowed three walks. Meanwhile, Everett scratched out its lead. In the first, Wes Akers drew a two-out walk and stole second. Benton pitcher Ashton Holyfield got within a strike of getting out of the inning but his 1-2 pitch was pounded by Cody Gogus for a long double to right-center. Akers was able to score easily to make it 1-0.

In the second, the Sox got some help but forced some of it by hustling on the bases. With one out, Austin Caldwell tapped to third resulting a wild throw to first. Caldwell went to second and, when the throw there was not handled cleanly, he dashed on to third. Korey Thompson got ahead in the count 2-1 then perfectly placed a squeeze bunt. Holyfield charged off the mound to field the ball, then tried to flip it to his catcher Clay Holicer. But the toss sailed past Holicer and Caldwell scored easily as Thompson sprinted to second.

He would do a little more sprinting moments later when Trey Breeding got a bunt down to the left of the mound. Again Holyfield got to the ball and fired to first for the out. Thompson, on the run as Holyfield pitched, rounded third and never stopped. He slid safely home as Benton first baseman Ian Allred failed to get off a throw. 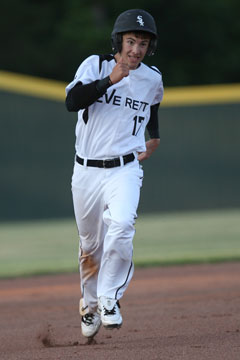 With a 3-0 lead, Cambron returned to the mound in the third. He induced a grounder to short by Allred but then hit Hunter McDade with a pitch. McDade stole second as the count went to 3-2 on Holicer. The next pitch, Holicer drove into the gap in left-center for an RBI double, Benton’s first hit of the game.

Emmerling came on to relieve Cambron. Wesley Ramsey got a bunt down and reached safely on an errant throw. With Holyfield at the plate, Ramsey stole second. Emmerling then picked Holicer off third. After a brief rundown, Breeding, the Bryant catcher, made the tag then threw to Akers at third as Ramsey wandered off second too far. He tried to scramble back but Akers’ throw to Thompson nabbed him for an unusual 1-5-2-5-4 doubleplay to end the inning.

The Sox were unable to add to their lead in the bottom of the inning. In the top of the fourth, Holyfield was back up and he walked on four pitches. Dupree was called to the mound to face Lucas Ward who greeted him with a line drive. But Hastings speared the ball and caught Holyfield off first for a doubleplay.

Austin Sheridan followed with a single but Dupree struck out Jay Davies to end the inning. He would fan two more in a 1-2-3 top of the fifth before the Sox made it a run-rule win in the bottom of the fifth.

The fourth-inning uprising started with a walk to Thompson. He was forced at second on Zach Graddy’s comebacker to Allred, the new Benton pitcher. But Ezell lined one down the right-field line for a double that chased Graddy home all the way from first.

With two down, Akers and Gogus drew walks to load the bags for Tucker who parachuted a hit into shallow right-center to drive in two. Hastings followed with a single down the left-field line to knock in two more. Harrison cracked a double but Allred wriggled out of the inning at that point, getting Thompson to fly out to center.

A run away from a run-rule win, it didn’t take Bryant long to end it in the bottom of the fifth. Graddy singled. With Caldwell, in as a courtesy runner, on the move, Ezell laced one to the corner in left. Caldwell scored easily to clinch the win.

The team was set to travel to a tournament at Jonesboro High School on Friday. The Sox open against the Jonesboro Hurricanes at 8 p.m.

No one out when game-ending run scored.

Emmerling faced one batter in the fourth.