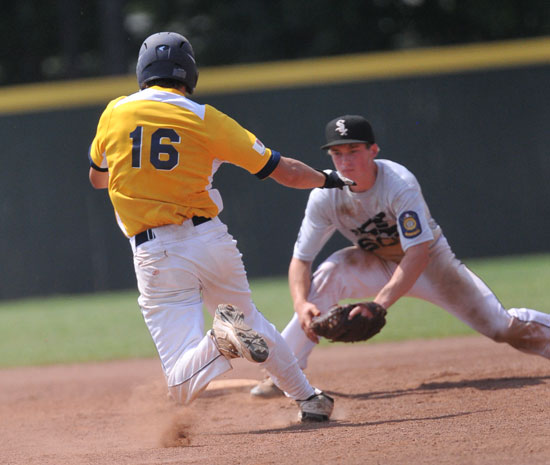 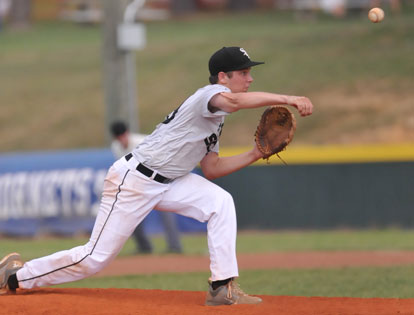 It was the second win of the day for the Sox who faced elimination in both outings. Earlier, they were three outs away from an 8-5 loss to Post 66 of Wynne only to scored seven times on just one hit in the top of the seventh in what turned out to be a 12-9 decision that ended the tourney for Wynne.

Only three teams remain in the bid for a AA State title. Bryant faced a rematch with Newport Kell Motors at 4:30 p.m., today. Newport lost the winners bracket final to Pine Bluff National Bank, 5-2, on Saturday. The Bryant-Newport winner will turn around and play Pine Bluff at 7 p.m., in the championship round. If Pine Bluff loses, a winner-take-all final (the “if” game) would be Monday at 6:30 p.m. 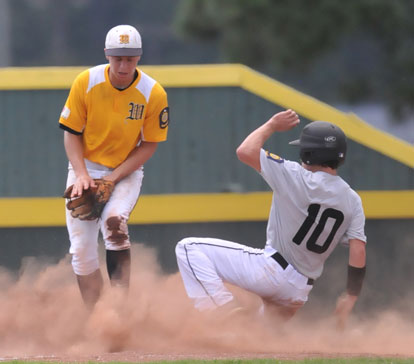 The Sox only had 11 hits in the two games but they benefitted from a combined total of 19 walks with four hit batsmen.

With lefty Jason Hastings on the mound, the Sox built a 3-0 lead over the first three innings. In the fourth, the Rams, after squandering opportunities in the first two innings, scratched out four runs to take the lead.

In the bottom of the fourth, Lakeside right-hander Logan Derosier, who struck out nine in the game, retired the first two batters and was a strike away from getting out of the inning with the lead intact, issued a walk to Bryant lead-off batter Trevor Ezell.

With his keystone partner Korey Thompson at the plate, Ezell swiped second then third. Thompson walked to bring up Hastings who shot one through the right side for a single that tied the game and more. When the ball was thrown wildly to third by the Lakeside right-fielder, Thompson sprinted home with the tiebreaking tally. 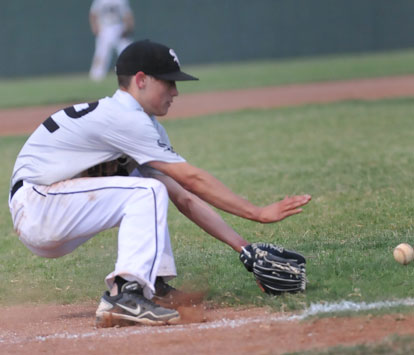 Hastings, who had recorded the final three outs of the win over Wynne, gave way to Tucker in the fifth. With one out, Lakeside’s Spencer Hecke walked and, with two down, so did Taylor Street. On the next pitch, Tucker hit Marcus Fisher with a pitch bringing up Rams’ lead-off man Jacob Bradshaw who, to that point, had smacked a double and a single with a walk. But, on a 1-2 pitch, Tucker struck out Bradshaw to get out of the jam with the lead intact.

In the sixth, Taylor Parker singled for his third safety of the day. But Tucker got Derosier to ground sharply to Ezell at short. He got the ball to Thompson for the force at second then Thompson’s strong, quick relay to first resulted in the inning-ending doubleplay.

Tucker finished with a flurry, worked a 1-2-3 seventh, fanning two and getting the batter between the strikeouts to pop out with Trey Breeding, the Bryant catcher, making a nice play on the ball.

In the first two innings of the game, Lakeside had chances to gain an early lead. In the opening frame, a lead-off double by Bradshaw and a one-out walk to Parker produced the threat. But Hastings came back to strike out the next two to escape.

In the second, Hecke reached on an error but Breeding nailed him with a fine throw on a steal attempt. With two down, Street walked and Fisher singled to left. Bradshaw singled to load the bases but Hastings got Josh Walker to line to Tucker in center to keep the game scoreless. 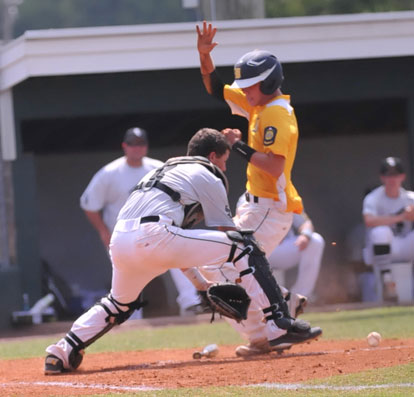 After Derosier pitched around a one-out hit in the first, he walked Drew Tipton nad Tucker with one out in the second. Breeding sacrificed them to second and third then Austin Caldwell’s grounder to short was booted and Tipton sprinted home with the game’s first run.

Parker singled to start the third but was erased on a fielder’s choice as Derosier reached. Garrett Garner then bounced into a doubleplay from Ezell to Thompson to Cody Gogus.

The Sox extended their lead to 3-0 in the bottom of the third when Hastings slapped a one-out single to right and Harrison Dale walked. Gogus singled to load the bases then Tipton hit a grounder to short for a force at second but, in a vain attempt to turn an inning-ended doubleplay, the Rams threw the ball away and Dale came around to score.

Lakeside’s four-run rally started with a single to center by Hecke. Bo Ritter beat out a bunt for a hit the Street sacrificed them to second and third. A walk to Fisher loaded the bases and a walk to Bradshaw forced in the Rams’ first run.

A second run scored when Walker grounded into a force at second. Parker followed with a two-run double to put Lakeside ahead. 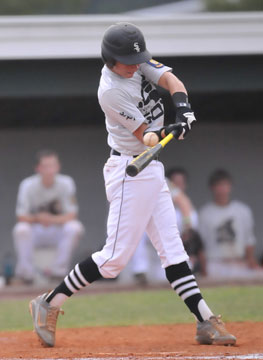 Hastings finished it there, getting Derosier to bounce to third.

Wynne came into the game after ousting Heber Springs, 3-2, the previous weekend, then knocking out Stuttgart on Friday. And Bryant nearly became their third victim.

But Wynne ran out of inning for the team’s top pitcher, Caleb McNatt. The right-hander had worked five innings in the win over Stuttgart so he had only five left when he replaced starter Cole Campbell with two out, Bryant up 4-2, and the bases-loaded in the second.

Wynne rallied for five runs in the bottom of the second and, after Bryant whittled a run off the lead in the third, McNatt found his groove and eased through the fourth, fifth and sixth. But, with just 2/3 of an inning left on his pitching limit, McNatt gave way to Nathan Harrison to start the seventh.

The Sox had managed nothing in the fifth or sixth but, in the top of the seventh, they got patient and it paid off. Harrison issued a walk to Gogus and, with Caldwell in as a pinch-runner, Dale drew a pass on just five pitches. Tucker was hit on the very next pitch and the bases were loaded.

Zach Morris came on in relief but fared much the same. A walk to Tipton forced in a run then Devon Dupree was hit by a pitch to force in a second tally.

With the lead whittled to 8-7, Morris issued a walk to Breeding that forced in the tying run.

Lefty Hunter Green came on in relief at that point. That’s when Ezell smacked the lone hit of the inning, a bouncer through the left side for an RBI single that put Bryant ahead.

Green walked Thompson to force in yet another run then Hastings delivered a sacrifice fly to plate Breeding, making it 11-8. The Sox ran a safety squeeze with Caldwell at the plate. He got the bunt down and Ezell scored to make it an even dozen.

Wynne’s J.T. Waymire walked to start the bottom of the seventh. Hastings then plunked Johnathan Collins and it appeared that Wynne could be mounting its own comeback.

But Hastings got the next batter, Austin Wilson to tap back to the mound. Hastings fired to second for a force to retire Collins. Cole Harris grounded into a force as Waymire reached third. But that’s where he was stranded as Green grounded to second to end the game. 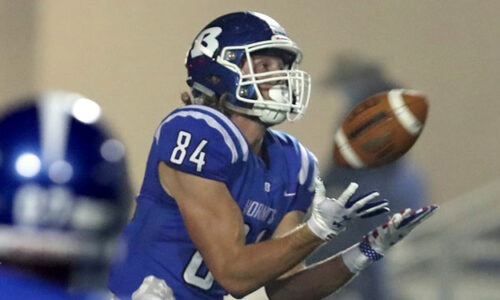