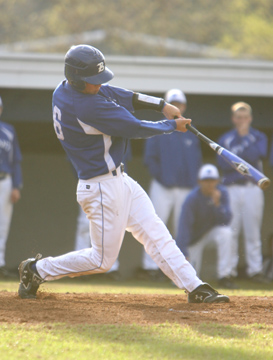 BRYANT, Ark. — Productive outs: Moving a runner from second to third with a grounder to the right side; a sacrifice bunt; putting the ball in play on a hit-and-run; producing a flyball to the outfield with a runner at third and less than two outs — those little things can make a team that’s not hitting productive on offense. They can also turn a team that hits pretty well into a very productive offense.

There have been times this season when the Bryant Hornets were an example of the former, scratching out runs with execution on offense backed by solid defense and effective pitching. But, on Thursday, March 26, they proved to be a prime example of the latter, combining productive outs and 10 hits with a determined pitching effort, most notably from sophomore right-hander Caleb Milam, to overcome a few uncharacteristic defensive breakdowns.

The result was an 8-3 win over the Texarkana Razorbacks at Bryant High School Field.

Milam picked up his first varsity victory with four innings of relief in which he allowed just one run, scattering six hits and working around a trio of Hornet errors. Ben Wells closed out the game retiring all five batters he faced and getting out of a two-on, no-out fix with an inning-ending doubleplay.

Offensively, the Hornets used three sacrifice bunts, two sacrifice flies and — though it didn’t play into the scoring — executed a hit-and-run perfectly along the way.[more]

The game was tied 2-2 going into the bottom of the third. Brady Butler and Tyler Sawyer set up the inning with singles. Brennan Bullock then got a nice bunt down that Texarkana first baseman Daniel Spears charged in and fielded. Hoping to get a force at third, Spears rushed a throw that sailed over third sacker Reid Peavy and down the left field line. Butler scored, Sawyer made it to third and Bullock pulled in at second. A pitch later, Tyler Brown popped up to shallow right where Tyler Weir came charging in to catch, sliding to get under the ball. Sawyer tagged on the play and sprinted home before Weir could get to his feet and get the ball to the plate.

Up 4-2 with Bullock at third and just one out, Bryant head coach Kirk Bock had the next batter Jonathan Wade execute a safety squeeze. Wade got the bunt down perfectly toward third and Bullock raced home as Peavy charged to make the play. Peavy’s throw to first was high allowing Wade to reach safely as well, though he was stranded.

In the fourth, Caleb Garrett led off with a single and stole second. Butler’s liner to right-center chased him home and, when the throw missed the cut-off man, he slid safely into second. Sawyer’s sharp single to right got Butler to third then Bullock came through with a sacrifice fly to make it 7-2. 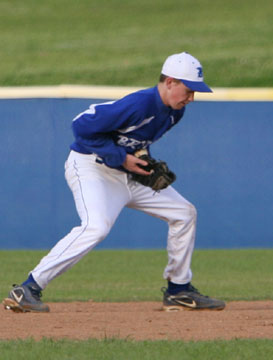 Meanwhile, Milam, who had relieved Sawyer the starter in the second worked around base hits in the second and third both thanks to his batterymate Kaleb Jobe who threw out D.D. Bigham in the second and Weir in the third when they tried to steal. In the fourth, Milam retired the first two batters then an error extended the inning. A single to right-center and an errant throw to third put runners at second and third. But Milam struck out Spears to end the threat.

In the fifth, Texarkana managed to trim a run off the Bryant lead when Bigham, who had three hits, doubled, advanced to third when Weir was robbed of a hit on a nice back-handed stab at second by Brown, but then scored on a sacrifice fly by Ian Underwood.

The Razorbacks went on to load the bases on a pair of hits and a walk but Milam escaped by inducing a bouncer to Brown at second from Colt Galloway to end the inning.

The Hornets got that run back in the home fifth. Wade was hit by a pitch, Justin Blankenship executive the sacrifice bunt and Hunter Mayall lashed an RBI single to center to set the final score.

Milam started the sixth but, after a lead-off single to Peavy and a walk to Spears, he gave way to Wells who got Bigham to tap one out in front of the plate that Jobe pounced on and threw in time to third for a force. The inning ended when Weir bounced into a 6-4-3 double play.

In the seventh, Wells waded through the heart of the Razorbacks’ batting order, three-up, three-down to finish the game.

Bryant improved to 9-3 on the season.

Both teams scored twice in the opening inning. In a tune-up start, Sawyer surrendered two runs on three hits with an error playing a roll in the uprising. But, with runners at second and third, the Bryant ace struck out his starting counterpart Trey Selph then bot Galloway to pop to Butler at first to leave them stranded.

In turn, Garrett’s one-out single in the bottom of the inning, sparked a counter-attack. Garrett scored all the way from first on a long double to left-center by Jobe. Even Jobe, running for Kaleb Jobe, advanced to third on a wild pitch then scored when Sawyer’s two-hopper to first was misplayed.

The Hornets threatened in the second when Blankenship drew a one-out walk. He was on the move when Mayall bounced one right through the hole left by the shortstop Underwood as he moved to cover second. With Blankenship at third, Mayall swiped second but Selph got out of the jam by fanning Garrett then watching as Bigham, in center, ranged deep into the gap in left-center to rob Jobe of another hit.

Weather-permitting the Hornets were set to play at Benton on Friday, March 27, with the JV game at 3:30 p.m., and the varsity game starting around 5:30. In another non-conference outing, Bryant was set to host Little Rock J.A. Fair on Saturday with a varsity game at 1 p.m., followed by a JV contest.

In Thursday’s JV game, the Hornets sent 12 batters to the plate in the second inning on the way to a 15-0 win in three innings.