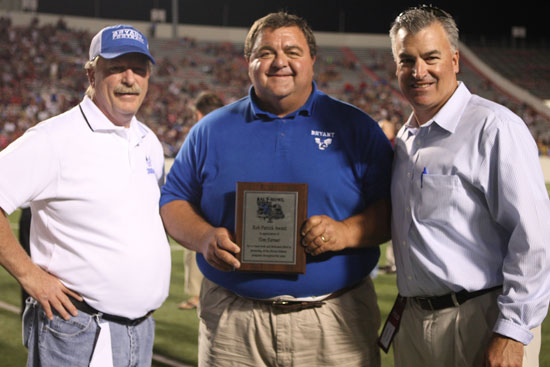 The recipient of the Rob Patrick Award for Community Support from Bryant is Mr. Tom Farmer.

Bryant’s 2013 Rob Patrick service award recipient is an individual who WAS and IS most influential in creating and developing the highest attended, most decorated Arkansas high school football event annually, the SALT BOWL.

A former football standout at Lake Hamilton HS and later, the University of Arkansas-Monticello, he began his lifetime of educational service at Benton Junior High School as Football Coach and Teacher. In 1990, this recipient was hired as Head Football Coach at Bryant HS where he guided the “Hornets” for four seasons. In 1994, he was elevated within the Bryant District to assume the roles of Athletic Director and Transportation director.  “Coach” served in this capacity for 16 years while leading Bryant Athletics through vast, accelerated growth which was facilitated by the hiring of many outstanding Coaches that have helped elevate Bryant to “elite” status among Arkansas Athletic programs.