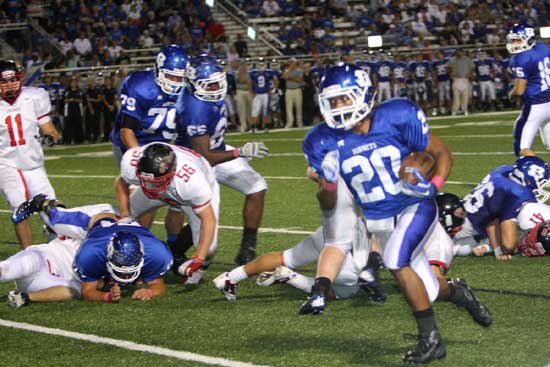 As the second half unfolded, it was beginning to look like the game would come down to[more] which team had the ball last. 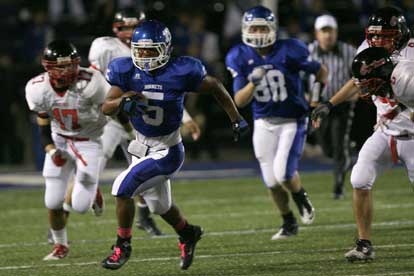 The Bryant Hornets and Russellville Cyclones were tied 7-7 at the half then started trading licks in the third quarter. Bryant took the lead, Russellville tied it, 14-14. The Hornets drove again but had to settle for a field goal that gave them the lead once more only to have the Cyclones drive for a go-ahead touchdown.

Thanks to a 35-yard bolt by senior running back Karon Dismuke then a third-down tunnel screen that Sawyer Nichols turned into a 37-yard play, Bryant regained the edge with 10:27 left in the game. Dismuke, who accounted for nearly 240 yards of total offense, scored from the 3 to put his team back on top.

It was Russellville’s turn but Bryant senior Dillon Winfrey made a huge play to break the string, sparking the Hornets to a closer-than-that 38-21 win on Homecoming night at Bryant Stadium.

Improving to 5-1 overall and 3-0 in the 7A/6A-Central Conference, the Hornets will next face the rival Conway Wampus Cats on the road in a first-place shootout. Conway sports the same record after a 26-14 win over Little Rock Central Friday. The Hornets and the Cats are the last two that remain unbeaten in league play.

Coming into the Homecoming game, Bryant had hardly used the corner blitz. But defensive coordinator Steve Griffith dialed it up a couple of times against the Cyclones.

“We had done it earlier in the game and they actually ran a screen in behind (Winfrey) and he almost knocked that one down,” Griffith recalled. “We wanted to bring some pressure off the edge. So we rolled it back in and he made a great play. It shifted all the momentum.” 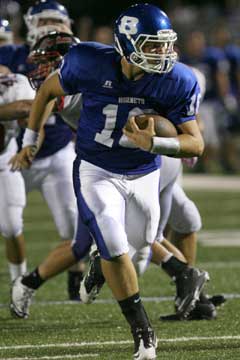 First, Russellville had to start at its own 20 after Jace Denker kicked off into the end zone, something he did on six out of seven kickoffs in the game. A first down play, a nice 8-yard run by Kendall Bond, was negated by a holding penalty. From the 11, a swing pass from quarterback Mitch Mullen to John Marasco was squelched by Travis Royal, Tyree Reese and Winfrey.

That set up a second-and-18 from the 12. Mullen dropped back and tried to make a quick throw on a bubble screen in the flat but Winfrey, though he was closer to the quarterback than the receiver, plucked the pass out of the air at around the 6 and stepped into the legendary ‘enchanted’ North end zone to give the Hornets the first two-score lead of the game.

“We just felt like, it was the short side of the field,” Griffith said of the call. “He didn’t have far to come and we felt like if they were throwing down the field he possibly could get to the quarterback. As he started in, he read what they were doing and he just slowed down a little, made the jump and made the pick.

“That turned the game around,” agreed Hornets head coach Paul Calley. “It kind of took the wind out of them.”

To top it off, after Denker kicked off into the end zone once more, Russellville’s very next offensive snap was another pass that went through the hands of intended receiver Frank Chiolino and into the arms of Hornets safety Travis Royal.

Regaining possession at the Russellville 33, the Hornets needed just three plays to find paydirt again. Dismuke picked up 9 yards on two carries to set up a third-and-1 at the 24. Quarterback Hayden Lessenberry ran the quarterback sneak and when he broke through the pile at the line of scrimmage, he was able to keep his feet and dash down the middle of the field for a touchdown.

With Denker’s extra point, the Hornets had turned a 21-17 deficit into a 38-21 lead in less than two minutes.

It was another gut-punch for the Cyclones, who dropped to 1-5 overall and 0-3 in the league despite holding fourth-quarter leads in all three of those conference contests. 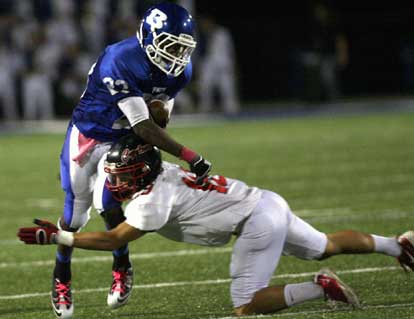 Bryant found out early that Russellville was going to be attacking on defense up front and playing tight coverage. Thus, it was difficult for the Hornets to get anything going in the air. In fact, in the first half, Lessenberry was just 2 of 5 for 6 yards. He wound up 7 of 13 for 110 yards, all season lows.

But, as is usually the plan, the Hornets took what the Cyclones gave them. Though Russellville seemed to be bringing the house every down, the Hornets’ make-shift line — which got back injured center Cortez Williams but lost right guard Kordell Boykins due to injury — finessed the blocks and it created some gaps for the slashing runs of Dismuke and Jalen Bell.

“We felt like, the way they lined up on defense, we had to run a certain way,” Calley said. “We blocked okay but a lot of yards came off the backs making cuts kind of behind where (the Cyclones) were stunting. That’s where the big yardage came from.”

Dismuke finished with 158 yards on 16 carries. Bell added another 67 yards on 10 tries. As a team, Bryant piled up 242 yards on the ground, a season high.

“I told them before the game that we needed both of them to step up and they did,” Calley remarked.

“You know, we dropped two passes right off the bat then we had some breakdowns in pass protection,” he noted. “We just didn’t feel comfortable throwing the ball. We felt like running the ball was our best bet.” 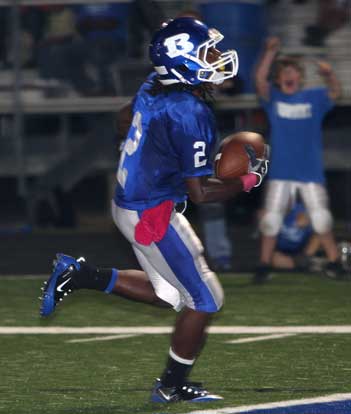 While the Hornets struggled early on, the Cyclones were moving the ball but couldn’t finish their drives. On the first possession, they reached the Bryant 37 but, on a third-down, Jacob Powell sacked Mullen.

And when Russellville punted, Bryant’s Caleb Thomas got a piece of it. The kick came up short and Bryant took over at its 29.

The Hornets went three-and-out including those two dropped passes. Ian Shuttleworth punted it back and the Cyclones marched to the Bryant 18 behind the running of Bond and a pair of passes by Mullen including a 15-yarder to tight end Lane Reves.

Mullen went for the end zone on a fade route from the 18. But cornerback Aaron Bell stayed with Chiolino, got the inside position and intercepted the pass for a touchback.

The teams traded punts after that. Third-down sacks proved to be a problem for both teams. First, Russellville’s Isaiah McGlone dropped Lessenberry for a loss of 9 and, a little later, Mullen was brought down by linebacker Marshall Everett and end Tim Kelly.

On the next series, Lessenberry was sacked on first down by Hunter Standridge. A pair of plays later, Shuttleworth was back in to punt. This time, however, the Cyclones went for the block and wound up knocking down the 6-3, 280-pound Shuttleworth.

The roughing the kicker penalty that resulted gave the Hornets a reprieve and of which they took advantage. Another penalty helped. Lessenberry’s pass into the end zone from the Russellville 33 was intercepted only to have the Cyclones flagged for both pass interference and roughing the passer.

From the 17, Dismuke took three straight handoffs and, on the third, scored from the 2 for the first points of the game.

Russellville got its touchdown in the closing seconds of the half. The Cyclones recovered a Bryant fumble at the Hornets’ 34. They drove to the 23 then Mullen completed three straight passes including the 12-yard scoring strike to Reves. Marasco’s extra point made it 7-7 at the half. 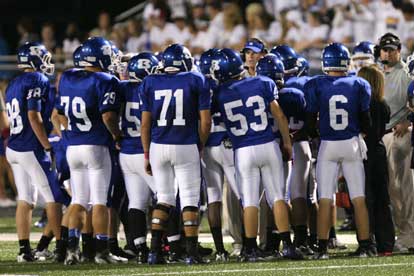 “The first half, we bent, we didn’t really break,” Griffith commented. “They got the score off the turnover right at the end of the half.

“But I was disappointed in our body language coming in,” he added. “It was almost like, ‘Oh, it’s over.’ We challenged them at halftime to come out and play with some fire and some intensity. It’s the Homecoming game. A lot of people have played ball over the last 10, 12, 14 years and even before that have played with fire and intensity and that’s what we want to do.”

On the first drive of the second half, fans got a chance to see that Calley is no Jace Denker.

The Hornets faced a second-and-15 at their own 44 when Lessenberry went deep for Winfrey. Russellville cornerback Anthonious Davis was running with his back to the ball and never looked back. The pass was a little short and when Winfrey tried to come back for it, he was restrained by Davis. Winfrey tried to reach around the defender but couldn’t come back.

Much to the ire of Calley, no pass interference penalty was called. When the ball was thrown from one official to another, Calley, who was in between them trying to make his case, kicked at the ball in frustration and clipped it about 5 yards. 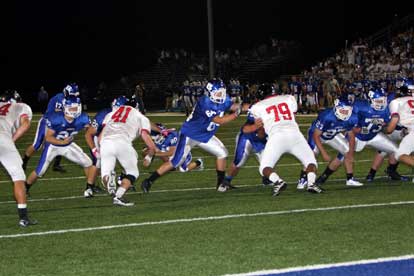 On the next play, however, Lessenberry threw a screen pass to Dismuke that the senior broke for 33 yards.

Dismuke wound up being the leading receiver with four catches — all screens — for 79 yards.

“We felt like that was one thing we could have some success with as many people as they were bringing and the way they twist-stunted,” Calley explained. “We did a better job blocking downfield on the screens. We threw (screens) a lot in practice this week and that’s probably why we were a little better at it.”

Jalen Bell slashed to the 5 then scored on the next play as the Hornets snapped the tie.

Russellville, however, put together an 11-play, 78-yard drive for an answering score. The key play was a 22-yard pass from Mullen to Reves that converted a third-down from the Bryant 33. Nick Hendrix followed with a 10-yard run and eventually scored from the 6 after a penalty had pushed the Cyclones back.

On Bryant’s turn, the big play was another screen that Dismuke broke for 38 yards. Bell dashed 17 yards to the 12 but the drive bogged down there. From the 9, Denker drilled a 26-yard field goal as the Hornets edged ahead.

Bryant tried to surprise the Cyclones with a onside kick, much as they did at a key moment in their 45-35 win over Little Rock Catholic two weeks before. But Russellville was ready. Not only did Kyle Roberson cover the ball, he kept his feet and dashed to the Bryant 39.

The Cyclones had to convert a pair of third downs but they found the end zone again. On the first play of the fourth quarter, facing a third-and-14 from the 27, Mullen fired a touchdown pass to Reves who was running a post route.

Russellville had its first lead of the game.

“I attempted the onside kick in hopes that we could get another possession, keep momentum and, you know, every time they got the ball, they took it down the field,” Calley explained. “I felt like we were going to have to outscore them. We tried it but it was unsuccessful. I really didn’t think it hurt us that bad. We gave them a short field, of course, but then we get our defense off the field and get our offense back on and we scored points.”

Indeed, Bryant responded with the drive that featured the big plays by Dismuke and Nichols. The Hornets defense took over from there.

“We gave up a couple of scores but we found ourselves once the momentum switched,” Griffith said. “We really picked up and played with a lot of intensity down the stretch in the fourth quarter.”