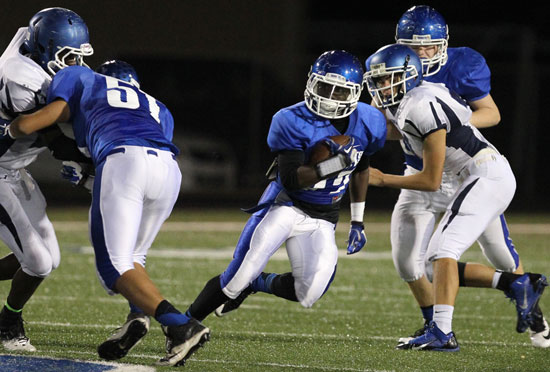 The Bryant Hornets freshman team didn’t have a single snap on offense until the first quarter was about half over. Conway White, meanwhile, had scored and had gained a second possession by then. 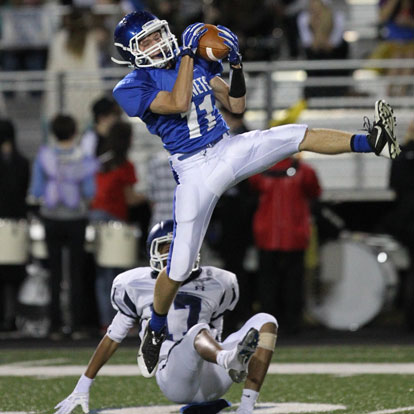 Bryant’s Jake East leaps to haul in an interception. (Photo by Rick Nation)

That’s because the Wampus Cats recovered one onside kick to start the game and another after their TD, a 30-yard pass from Parker Teague to Taj Speight.

But after the second onside, Bryant’s defense, aided by a holding penalty against the Cats shut them down. Marvin Moody made the first big stop for a loss on first down. After the penalty, Conway ran a double reverse that failed to fool London Taylor and Hayden Knowles. On third down, a deep pass from Teague toward Speight was knocked away by Jake East and the Cats were forced to punt.

It was pretty much all Hornets from that point on as they scored on their next four possessions and tossed in a 63-yard interception return for a touchdown by Phillip Isom-Green on the way to a 34-7 victory. 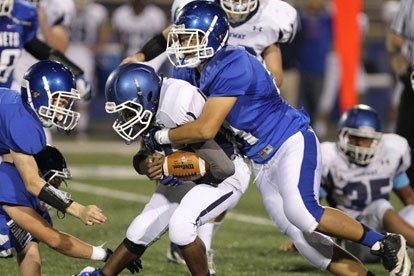 The win improved the Hornets to 7-2 overall and 6-2 in the Central Arkansas Junior High Conference with their season-finale coming up on Tuesday, Nov. 5, at rival Benton. It kept the team’s hopes for a share of the league title intact.

“They shocked us right off the bat there with those onside kicks,” acknowledged Hornets coach Kenny Horn. “We had a couple of jughead plays but you know we overcame it.”

The Hornets amassed 272 yards on the ground and only attempted two passes, both incomplete. Before being sidelined with a sore knee, Cameron Coleman picked up 82 yards on just six carries including a 49-yard touchdown run that helped Bryant tie the game. Defensive standout DeAmonte Terry took up the slack with 123 yards on 13 tries with two touchdowns.

“Really, I thought that was probably the cleanest game we’ve played all year as far as us executing offensively and defensively,” Horn stated. “It was complete for us. We didn’t have to throw the ball a lot tonight and we handled them up front and we put enough points on the board, shut them down enough to win.” 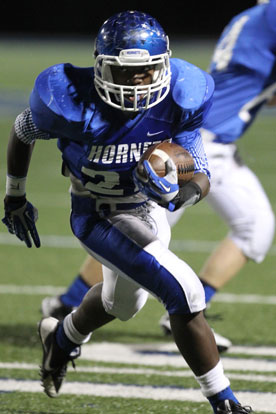 The Bryant defense allowed just 101 yards of total offense, 36 of that came on the first series of the game. In the second half, the Wampus Cats were held without a first down and netted just 2 yards.

Conway picked up a first down on its subsequent drive but, on a third-and-5 at the Hornets’ 38, Teague’s short pass was picked off by Isom-Green in stride. He went the distance and, with Kincaid’s kick, it was 14-7.

The next Conway series ended with a double-reverse pass but East was not fooled. He was right there with Speight and made a leaping interception at the Bryant 28.

Coleman went out after starting the Hornets’ possession with a 14-yard run. Terry carried seven times in the 11-play drive including a hard-charging 15-yard burst that got the ball to the 5.

A procedure penalty backed Bryant up to the 10 but Terry carried twice to get to the 2 and, from there, quarterback Beaux Bonvillain carried it over on a sneak. 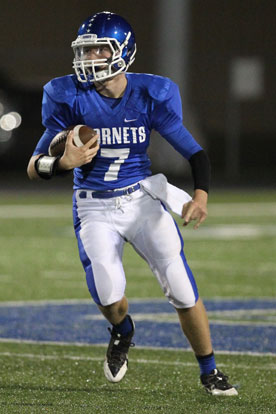 Up 21-7 with 1:13 left in the half, the Hornets surrendered three straight completions which got the Wampus Cats into Bryant territory but they ran out of time as Madre Dixon hauled down running back Kameron King on the last play.

Conway started the second half with a long kickoff return by Nicollus Fletcher. Though the Cats started at the Bryant 30, they were unable to pick up a first down. Landon Smith made a nice stop on a swing pass to King that went for no gain. Austin Kelly made a big hit on a pass to Speight that wound up picking up a yard. On fourth down, Caylin Allen knocked down a deep pass and the Hornets took over on downs.

Terry carried four straight times and, on the last of those, burst 41 yards for a touchdown. Kincaid booted the PAT and it was 28-7 with 4:28 left in the third quarter.

Conway’s offensive woes continued and a punt ensued. The Hornets put together one final scoring drive from their own 43. Isom-Green contributed a 16-yard run to the Cats’ 21. Terry carried to the 10 then scored from there to set the final score with 1:01 left to play.

Conway got two more possessions but each a three-plays-and-punt as the Hornets put the game away with Smith leading the reserves at quarterback. His 16-yard keeper nearly made up for a holding penalty that had the Hornets backed up to their own 7.

But Bryant’s lone punt of the night was a boomer for Kelly, covering 47 yards. The Hornets forced a return punt then milked the last 3:44 off the clock.