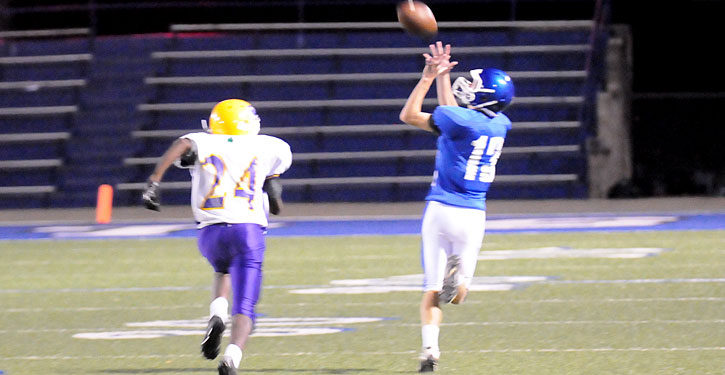 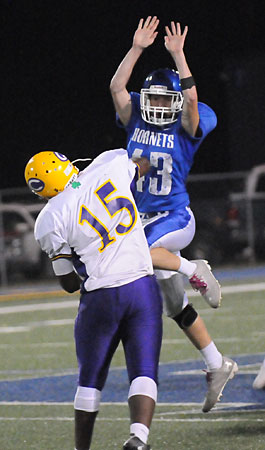 They notched two quick touchdowns and appeared to have a third one during the first quarter. A penalty cost them the third TD but it still seemed to affect the Hornets anyway. They kind of relaxed on offense and lost their edge.

Meanwhile, the Rockets showed some grit while frustrating the Hornets attack — the kind of grit that Bryant head coach Kenny Horn said, afterwards, he’d like to see more from his offense.

Catholic’s offense couldn’t move the ball much at all. In fact, the Rockets produced a total offense of 11 yards. In 18 rushes, they finished with minus-8 yards. Bryant held the visitors to just one first down in the opening half and only three in the game. 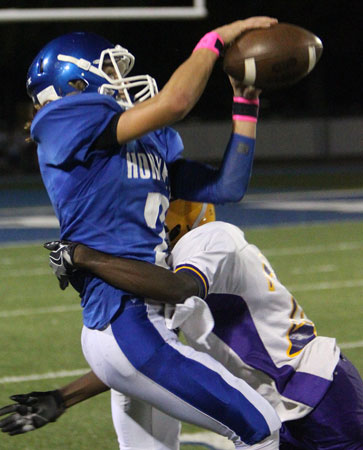 Gavin Wells tries to haul down a pass as Catholic’s Isaac Leggett tries to break it up. (Photo by Rick Nation)

If it feels kind of tough that the coach wasn’t happy with his team’s performance in a 21-0 win, Horn knows how good his team can be at their best. He’s measuring them by their own potential.

“We can win some ugly games, which is good,” he said. “But when we get later on in conference, we’re going to need to play very clean and execute very well if we’re going to win the rest of our games.”

The Hornets improved to 5-0 in conference, 6-0 overall but has their three top competitors for the league championship, including two of them on the road. They travel to play a struggling Russellville team next Thursday then close out against Cabot South (3-1 coming into Thursday), Conway White (also 3-1) and unbeaten Benton in a final home game on Tuesday, Nov. 1.

Against Catholic, the Hornets scored on the second snap of the game when Gage Stark got behind the defense and quarterback Jake Meaders hit him in stride for a 63-yard touchdown pass. 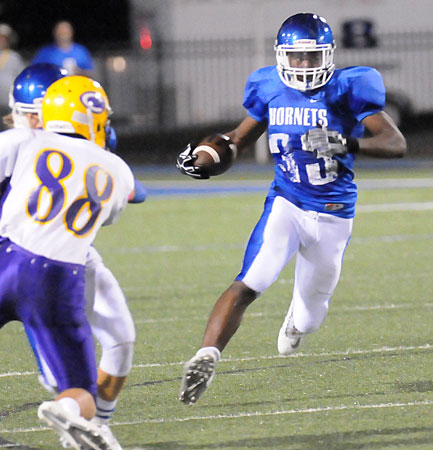 A pass from Gavin Wells to Austin Bailey tacked on a two-point conversion and the Hornets had an 8-0 lead less than a minute into the game.

On the Rockets’ first play, the ball was separated from running back Brandon Ward by the Hornets’ Tristan Sehika, who recovered the fumble as well at the Catholic 32.

Though a holding penalty pushed the Hornets back, Meaders, who completed 10 of 20 passes for 197 yards in the game, found Wells for 39. Ahmad Adams scored from the 4.

Though Adams got off to a slow start, he wound up with 174 yards and two touchdowns on 12 carries in the game.

Trailing 14-0, the Rockets went backwards on offense. On third-and-11, quarterback Jordan Edington was sacked by Catrell Wallace and, after a punt, the Hornets’ offense had another short field to work with, 37 yards away from more points. 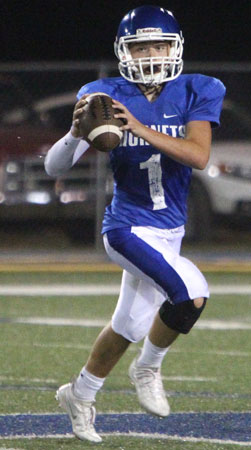 Meaders completed passes to Jaeger Burks and Wells on the way to the 18-yard line. The Hornets faced a fourth-down there and, once again, Meaders found Stark for a touchdown. This time, though, the Hornets were flagged for an illegal substitution, negating the TD. A second fourth-down throw fell incomplete and Catholic took over on downs.

“We can’t let that happen,” Horn insisted. “We’ve got to come right back and do something else better. If not, then the next possession we’ve got to do something with it. We can’t get in a ditch and stay there. We’ve got to get out of it.”

The Rockets too had a big play — 37-yard pass completion — negated by a penalty and wound up punting the ball back to Bryant.

From their own 45, the Hornets drove to the Catholic 23. Adams had a 15-yard run and Meaders connected with Wells for 11 yards. But the Rockets’ defense stepped up. When a second-and-11 play resulted in a 13-yard sack of Meaders by the Rockets’ Cole Black-Ocken, the Hornets couldn’t recover.

Catholic took over on downs and, a play into their series, the Rockets picked up their only first down of the first three quarters on a 17-yard pass from Edington to Grant Smithson. 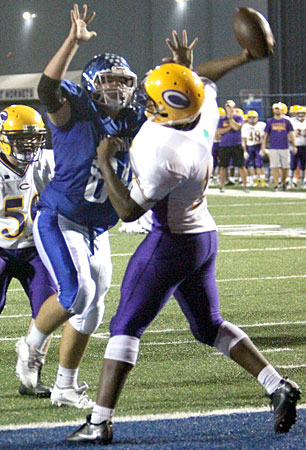 Their deepest penetration into Bryant territory was the result but, when they got to the 35, they were unable to convert a fourth-and-3 with 1:43 left in the half.

Behind Meaders’ passing, the Hornets made a bid to extend the lead but they ran out of time after a 23-yard completion to Wells that reached the 15.

Wells would end up with six receptions for 92 yards.

To start the second half, the Rockets got the ball at midfield thanks to a nice return by Carter Cochran. But three plays later, they faced a fourth-and-11 and had to punt.

With Catholic playing a gambling defense, the Hornets lost yardage on either side of a 44-yard gallop by Adams. Meaders broke a 20-yard run but it was called back due to a holding penalty.

The teams traded punts before Adams, running out of the wildcat set, sprinted 72 yards for a touchdown with 1:18 left in the third quarter. Grayson Scoles tacked on the extra point and it was 21-0. 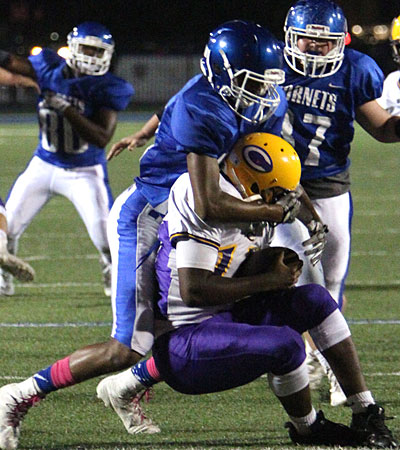 Sean Kirby supplied a sack and Sehika stopped a run for no gain and, in no time, the Hornets’ offense was back on the field. On a 26-yard run by Meaders, an 18-yard surge by Adams and a 20-yard pass from Meaders to Wallace, Bryant drove to the 9.

Two plays later, however, a pass was picked off by Catholic’s Jacob Pruss.

That gave the Rockets one last chance to break through. But, from their own 12, they didn’t have enough time. Kirby made another tackle for a loss then so did Wallace and Catholic ran out of time. 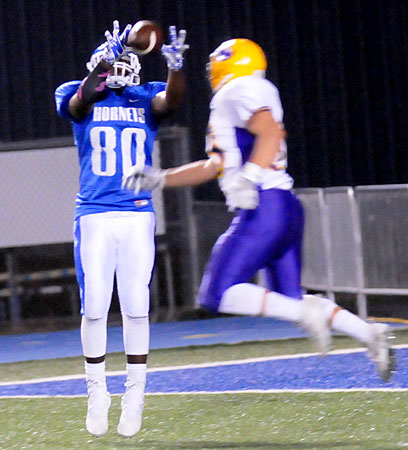 Austin Bailey reaches up for a pass on a two-point conversion attempt. (Photo by Kevin Nagle) 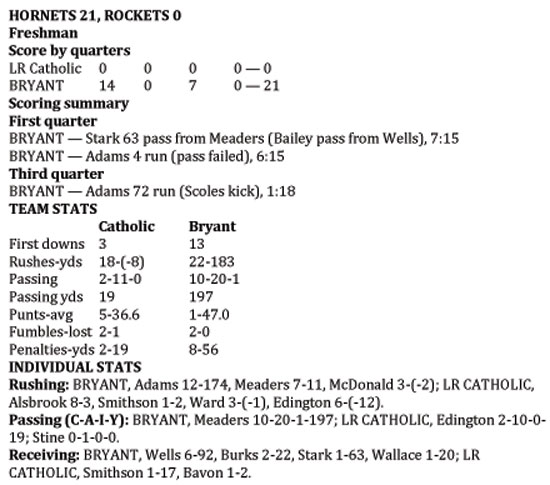