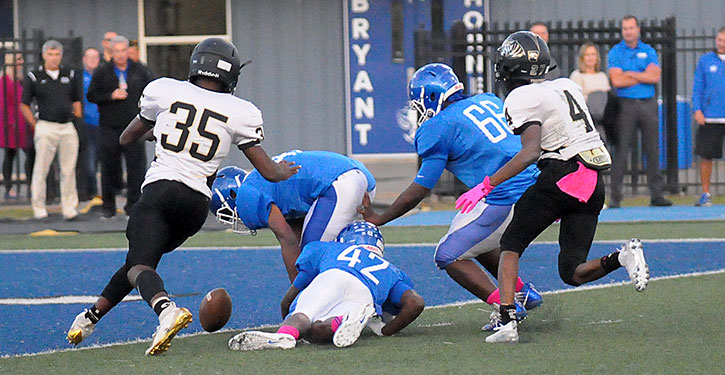 Thirty-five yards — that’s the net total offense for the Little Rock Central Tigers freshman team on Thursday night against the Bryant Hornets’ frosh at Bryant Stadium. Bad snaps, sacks and lost-yardage running plays resulted in the Tigers’ finishing with minus-30 yards rushing in the contest as the Hornets improved to 7-0 on the season with a 42-0 victory in the non-conference game.

Bryant led 35-0 at the half so the second half was played with a running clock in accordance with the Arkansas Activities Association Sportsmanship (mercy) rule.

Quarterback Cory Nichols ran for a touchdown and threw for another, accounting for 214 yards of total offense to lead the Hornets, 83 on the ground and 131 threw the air.

As was the case for the Bryant Hornets varsity team last Friday night at Little Rock Central, the freshmen scored first without the offense having taken the field. Central quarterback Tyrandis Britt was sacked on a second-down play by Traylon Russ for a loss of 12 yards and, a play later, Kris Sims was back to punt. But a high snap was misplayed by Sims and, in the scramble for the loose ball, it rolled into the end zone where Russ fell on it for a touchdown.

Stephen Fuller kicked the extra point and Bryant led 7-0 less than a minute into the game.

After another Bryant kickoff, the Tigers picked up their lone first down of the half on a 12-yard pass completion from Britt to Sims. A play later, Britt was hauled down for no gain by Gabe Allen and, after an incomplete pass, Sims was back to punt again.

He got the kick away this time, but it was short. The Hornets had great field position at their own 47. Nichols passed 38 yards to Braylon Montgomery then ran it in from the 15. An extra-point attempt failed, and it was 13-0

Will Cornelius and Tyler Mosley made tackles for losses on back-to-back plays as the Tigers went backward. After a third-down pass fell incomplete, Sims was punting again.

From their own 32, the Hornets made it 21-0 with a seven-play drive that featured a fourth-down run for a first by Nichols, a 41-yard pass from Nichols to Jordan Knox then consecutive runs by Martavian Earle, who scored from the 6 then ran in the two-point conversion.

A trade of punts left the Tigers in a hole at their own 12. On first down, Ivory Gilmore dropped running back Anthony Brown for a loss to the 5. Two incomplete passes later and another punt was in the offing.

The Hornets set up on offense 47 yards away from another score. Despite a holding penalty, they needed just three plays. Nichols found Chris Gannaway for 18 yards and, after the penalty, the Hornet quarterback scrambled 31 yards to the 7. Montgomery caught the touchdown pass.

But the Hornets forced a quick three-and-out again and, though they were punted back to their own 28, the drove for another score in eight plays. Gannaway, on a jet sweep, took it in from 12 yards out. On the drive, Jaylon Brown caught passes of 10 and 17 yards. Nichols set up the touchdown with a 19-yard scramble to convert a third-and-10.

Fuller made it a mercy-rule margin with his extra-point kick.

The Hornet reserves added a touchdown on the first play of the fourth quarter. Capping a 76-yard drive that featured a 44-yard run by Tanner Newell, Jonathan White hauled in a Newell pass from 26-yards out. Fuller added the extra point.

Central’s next possession including a 4-yard loss courtesy of Bryant’s Joshua Dinkel. And, on third down, Nasir Vincent intercepted a Britt pass.

The Tigers managed their lone first down of the second half on the third-to-last play of the game. Britt connected with Sims for 41 yards. But two incomplete tosses followed as time ran out.