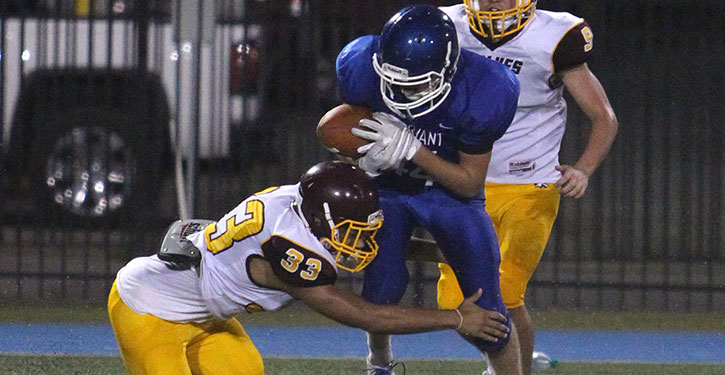 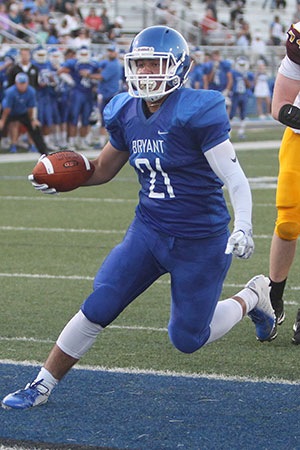 Fabian Torres finishes off one of his three touchdown runs against Lake Hamilton. (Photo by Rick Nation)

There appeared to be a bit more determination in the Bryant Hornets freshman team on Thursday night against the Lake Hamilton Wolves.

Coming off a disheartening loss to Cabot North in which they ran three offensive plays in the entire second half, the Hornets blasted the Wolves, 34-8. Bryant built a 26-0 lead at the half while holding Lake Hamilton to just 14 yards of offense. Nine of the Wolves’ 18 plays lost yardage. They just couldn’t block the Hornets consistently.

Linebackers Gavin Burton and Brandon Jones, along with tackle Will Diggins had big nights for the Bryant defense.

Offensively, running back Fabian Torres rushed for three touchdowns and quarterback Carson Burnett was 4 for 4 in the air for 135 yard and two scores.

Bryant scored on its first five possessions and, on their sixth, marched to the 16 with their reserves, eating up the final 4:45.

“We competed a lot harder tonight,” acknowledged Bryant coach Kenny Horn. “I really thought we played hard last week. We just didn’t get off the field (defensively). We only snapped it 17 times (on offense) last week and scored two touchdowns. I thought that, for the most part, we were pretty efficient. We just couldn’t get off the field. We had a couple of dumb penalties on defense and that’s what really cost us. We really and truly missed three tackles last week and two of them went for touchdowns.

The Hornets travel to North Little Rock next Thursday for a game that often has decided the Central Arkansas Junior High Conference championship. As talented as the Charging Wildcats have been over the years, the Hornets are riding a seven-game win streak against them into Thursday’s showdown. The last time, the Wildcats prevailed in the rivalry was in 2010.

The game against Lake Hamilton got off to an inauspicious start for Bryant. On the Hornets’ first offensive snap, they suffered a fumble than Lake Hamilton’s Zach Roberts recovered at midfield.

And, on first down from there, the Wolves’ Owen Miller slashed for 8 yards. But the Bryant defense rose up there and did not allow Lake Hamilton to manage a first down. On fourth-and-2, Jones stopped Miller for a loss and the Hornets took over.

Andrew Stueve gashed the Wolves for 8 yards on first down and, after Torres powered for 9 more and a first down, Burnett threw his first pass, hitting Stueve in stride for a 39-yard touchdown.

Stuck at their own 20 after the subsequent kickoff, the Wolves went backwards some more. Diggins and Burton sacked quarterback J.T. England at the 11. Lake Hamilton tried to go wide on second down and there was Burton again to drop Tevin Woodley for an 8-yard loss to the 3.

A third down play was stuffed by the Hornets and the Wolves punted.

A short kick gave Bryant tremendous field position at the Lake Hamilton 24. On the fourth play of the possession, Torres scored from 3 yards out to make it 13-0.

Lake Hamilton picked up its initial first down on the last play of the first quarter as Miller swept for 11 yards. But the Wolves lost yardage on three of the next four plays. Burton dropped Miller for a loss of 4 then Chris Elder knocked down Woodley for a 1-yard setback. After a 3-yard run by Miller, setting up a fourth-and-12 at the Wolves’ 48, England was sacked by Burton and the Hornets had the ball back with 5:51 left in the half.

Taking advantage of the momentum, they threw deep again. This time, Burnett connected with Robert Hendrix for 35 yards. That set up Torres’ 8-yard TD bolt. And with Stueve’s extra point, it was 20-0.

On the ensuing kickoff, Burton blasted Miller and jolted the ball loose. Pierce Kinley recovered for Bryant at the Lake Hamilton 37. Two plays later, Torres sailed into the end zone from 30 yards out with 3:36 left in the half.

Lake Hamilton tried to mount a scoring drive, but lost-yards plays on tackles made by Burton and Cameron Booth then Layton Dickerson left them at midfield as time ran out.

The Wolves got the ball to start the second half and picked up a first down. A tackle for no gain by Octavio Resendiz knocked them off schedule and they were eventually forced to punt.

The final Bryant touchdown drive ensued. But it wasn’t without some frustration. The Hornets had big gains wiped out by penalties on four consecutive plays and five of six. The one play that stood, however, was a 27-yard completion from Burnett to Turner Seelinger.

But, after being backed up repeatedly, they faced a first-and-31 at the Lake Hamilton 39. Stueve ran for 5 yards then Burnett and Seelinger hooked up again for a 34-yard touchdown on the final play of the third quarter.

Torres ran in a two-point conversion and it was 34-0.

With the Hornets filtering in reserves, the Wolves drove 59 yards in seven plays to get on the scoreboard. Woodley took it in from 25 yards out then ran in the conversion to set the final score.

Behind the running of Austin Williams, the Hornets drove to the Lake Hamilton 13 before reserve quarterback Danny Johnson took a knee. 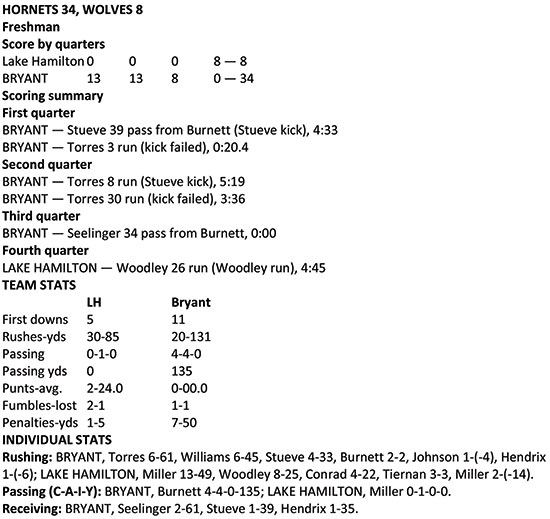