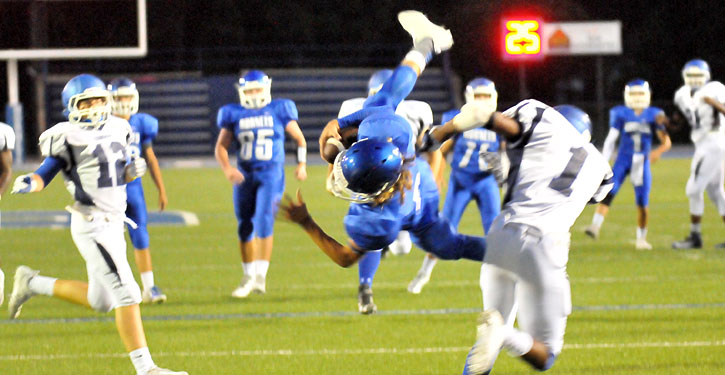 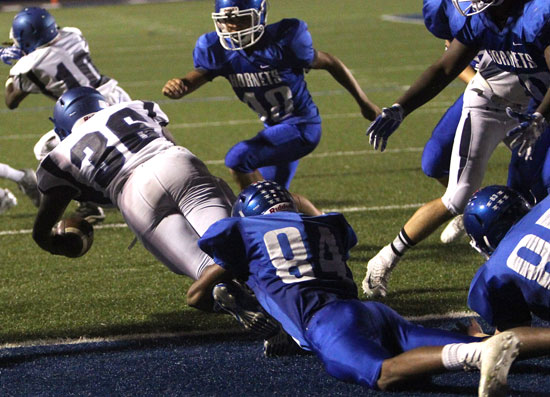 Give the Conway Blue Wampus Cats some credit. On Thursday night, they made the Bryant Hornets freshman team earn their fifth win in five games this season. But while they were holding the Hornets to a season-low 21 points, the Cats were unable to score at all.

The 21-0 victory for the Hornets extended a freshman win streak to 12 games in a row over the last two seasons. 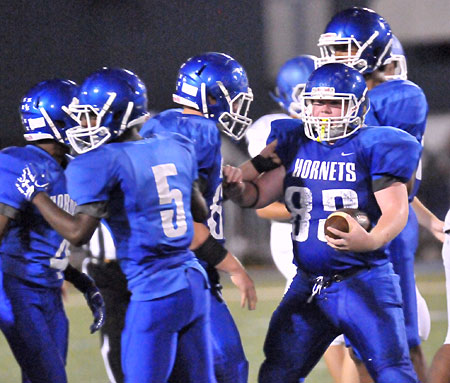 Tanner Wilson (83) comes up with a fumble as Christian Cain (5) and the rest of the Hornets’ defense celebrates. (Photo by Kevin Nagle)

The Cats were determined to stop Bryant’s star running back Ahmad Adams and they held him to nothing on four carries in the first half. But that opened things up for quarterback Jake Meaders who ran for the only score of the first half as well as completing 7 of 10 passes for 93 yards by intermission.

Adams got going in the second half. He finished with 93 yards and two touchdowns on seven second-half totes. Meaders only had to throw one more pass along the way, a completion of 9 yards to Gavin Wells to help fuel a touchdown drive that opened the third quarter.

Wells finished with seven receptions for 69 yards. Meaders finished 8 of 11 for 102 yards. He had an interception but it came on the last play of the first half in a last-second try to add to a 7-0 lead. 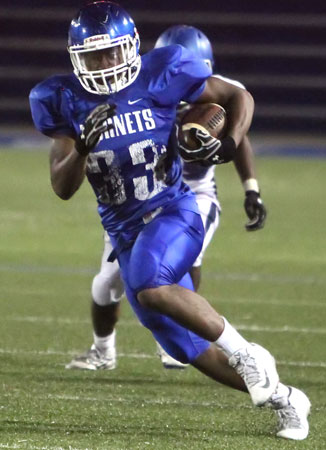 Ahmad Adams got loose in the second half on Wednesday night. (Photo by Rick Nation)

Bryant was coming off an emotional overtime win at North Little Rock and, while giving the Wampus Cats their due, Hornets head coach Kenny Horn noted its effect on his team.

“We had a big one last week,” he acknowledged. “I think there might’ve been a little bit of hangover from that. We were a little bit sluggish in the first half but we came out in the third quarter and reeled off two (touchdown drives) real fast. So we did what we needed to do and we executed in the second half like we talked about at halftime.

“They were getting us a little bit with some stuff they had,” the coach said of Conway Blue. “But we fixed it. We were just missing assignments.”

The Cats’ first two running plays resulted in 28 yards of gains but they wound up netting just 43 yards on the ground. The Hornets defense held them under 100 yards of total offense in the game.

“The defense played extremely well again,” Horn stated. “They forced a couple of turnovers. They helped us out and we took advantage.” 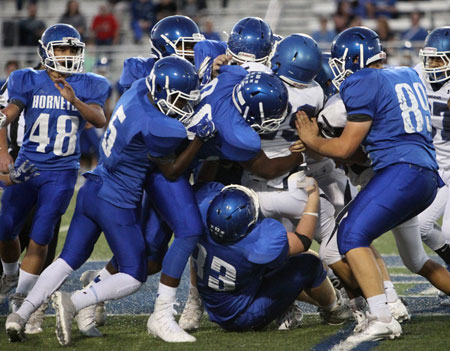 The teams traded punts to start the game but when Wells kicked for Bryant, the first fumble occurred. It was technically a muffed punt. If Conway Blue’s Tommy Graddy had fielded it cleanly then fumbled then Gage Stark’s scoop and score would’ve counted for a touchdown but, on a muff, the ball can’t be advanced.

But it only delayed the Hornets briefly. With possession at the Conway 20, the Hornets were hit with a penalty but, a play later, Meaders fired a pass over the middle on which Wells made a circus catch, leaping high and twisting in the air while Graddy, playing safety, tried to knock the ball down. 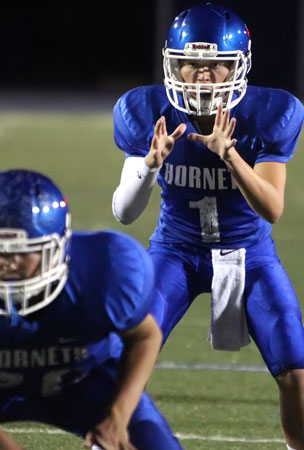 A play later, Meaders kept for a 7-yard touchdown run. Grayson Scoles booted the extra point to make it 7-0.

“On offense, we did not anticipate a four-front and they gave it to us,” Horn mentioned. “We were anticipating a three front with an overhang guy. But they went ahead and brought him down into the box and, you know, junior high kids, it kind of messed them up a little bit.”

The teams exchanged punts. Top notch defensive plays by Austin Bailey, Tanner Wilson and William Boyd foiled Conway Blue’s subsequent series. After a penalty sidetracked the Hornets’ offense, the Cats managed a first down. On a third-and-8 from its own 33, however, quarterback Xaiver Robinson completed a swing pass to Zac Hammons only to have Bailey hustle out to drill him, limiting the play to 2 yards and forcing a punt.

An 18-yard pass from Meaders to Wells gave Bryant a chance to score after the Hornets took over with :43.8 left, 72 yards away from the end zone. A 33-yard strike to Jaeger Burks nearly broke for a touchdown. From the 22, the Hornets had one last chance. Meaders threw to the end zone but Conway Blue’s Darien Criswell intercepted as time expired. 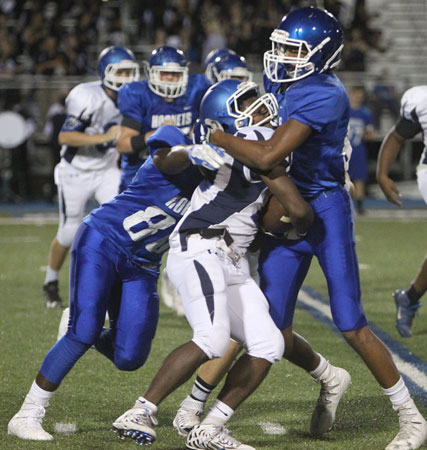 Austin Bailey (80) and Catrell Wallace (84) stand up a Conway Blue running back. (Photo by Rick Nation)

Bryant’s opening possession of the second half was sparked by Adams’ 25-yard run a play after Meaders and Wells hooked up. From the Conway Blue 24, Meaders kept for 4 yards then Adams slashed 20 yards for the TD, making it 13-0.

In turn, Conway Blue picked up a first down but, facing a second-and-9 at the Bryant 41, the handoff on a fly sweep was fumbled by Graddy and Wilson recovered.

Though the Hornets were not able to cash that in immediately, they backed the Cats up to their own 15 with Wells’ punt. 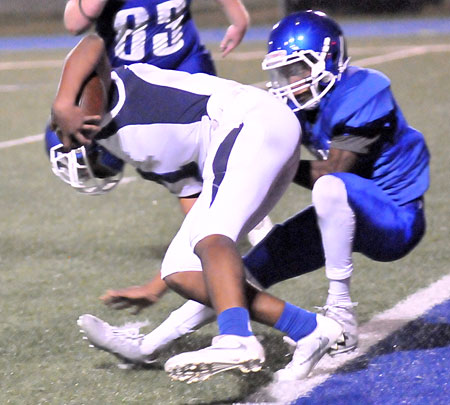 On first down there, a bad snap forced Robinson to hustle back to the 1 to recover it. From there, the Hornets stuffed two running plays.

Graddy punted and it appeared Christian Cain had a big return, 25 yards to the 11. But a holding penalty on the return left the Hornets at the Conway 32. On the first snap there, Adams rumbled the distance. Meaders ran in the conversion and the final score was on the board with 6:15 still to play.

Horn started sifting in reserves but, with the help of an illegal block penalty, the Hornets defenders made a stand. On a fourth-and-8 at the Cats’ own 30, running back Jabrien Earl was stopped after a 2-yard game by Ryan Riedmueller.

The Hornets took over on downs with 3:00 left. Dalen McDonald broke a 25-yard run to get Bryant inside the 10 and, from there, they were content with running out the clock. 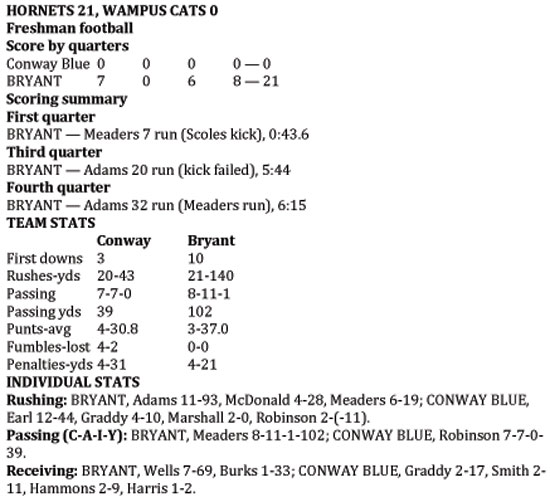