“We’re progressing,” stated Bryant Hornets assistant head coach Steve Griffith regarding his[more] defense. “We have a lot of new faces out there. Our learning curve is starting to pick up. We’re learning and we’re starting to get a little bit better execution.” 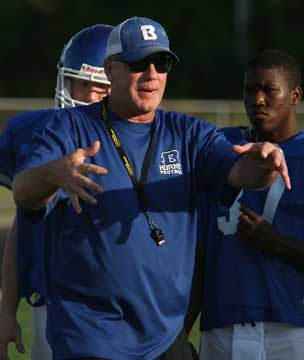 Execution will be key for the Hornet D this season. They’re not very big, certainly not as big as last season. They hope to be active, though, and, as always, they’ll depend of good technique in that execution.

The Hornets are working up to a preseason scrimmage against Pine Bluff on Monday, Aug. 22.

“We’re looking forward to that,” Griffith acknowledged, “just simply for a chance to play somebody else other than ourselves. And, from a coaching perspective, to have the opportunity to see full-speed to the ground. We try to quick-whistle everything in practice just to limit the wear and tear on our running backs and receivers, which is beneficial to the team but it doesn’t give us the chance to actually take people to the ground. So we always look forward to the scrimmage. It’s our chance to really see where we’re at.

“We do a lot of tackling drills in groups,” he mentioned. “But it’s the first chance we really have to just drive someone to the ground to see where we’re at in that aspect. The good thing is that, after that, we have a week and a half, almost two weeks to get ready for Benton and, hopefully, progress from there.”

The Hornets’ opener against the Panthers in the Salt Bowl is on Friday, Sept. 2.

Looking at the different facets of the defense, Griffith said, “On the line, we’re about two deep at each position. We’ve got about six or eight guys that we think can go in there and play.

“At linebacker, we’re a little thin,” he continued. “We’ve got four guys that are doing a really good job and then we’ve got a couple of guys that are playing offense that are coming over and giving us some depth. A couple of sophomores have stepped up and are showing that they might, hopefully, give us some depth.

“In the secondary, we’ve got a lot of guys rotating in from receiver,” Griffith added. “They’re having to work really hard on remaining focused during practice just because they’re not getting a lot of break. They’re either full-speed on defense and, where normally they might — the second group might step up and they’d get a little break but while the second group is in, they’re going to offense and going. So, it’s been a strain on them, I think, making it through practice. But I really think we’ve made a lot of progress at both the corner spots and also at safety. We’re anxious to see where we are against Pine Bluff.”