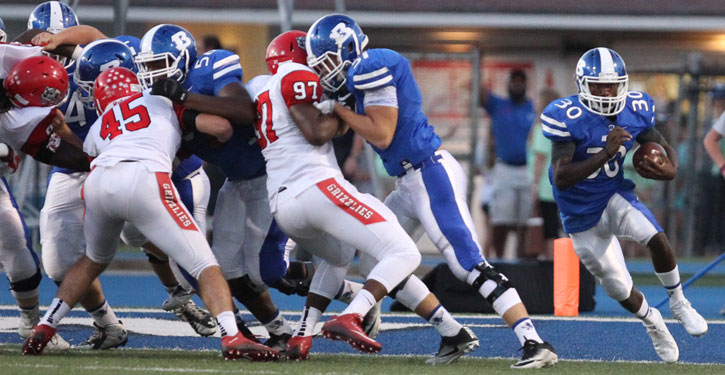 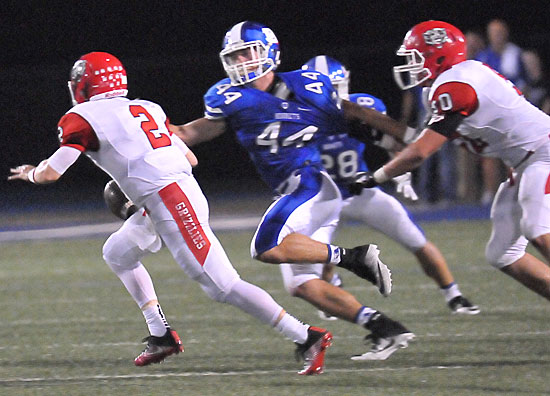 In previous years, the Bryant Hornets played the Fort Smith Northside Grizzlies five times and it was never a good match-up for the Hornets. Even the most successful Bryant team ever, the 1999 version, which was 11-0 going into a meeting with the Griz in the second round of the playoffs, didn’t match up well. A Bryant team that had averaged 32 points a game was shut out by a tremendous Northside defense and that remarkable season came to a sudden, premature halt.

The teams met again for the first time since 2011 Friday night in the 7A-Central Conference opener for both. And history held. 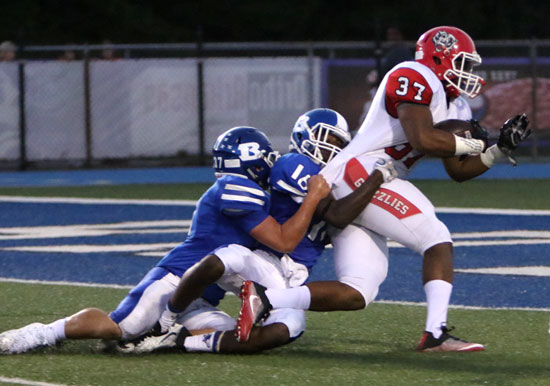 Jakob Neel and Antonio Rice drag down Northside’s Colby Fleming at the 1. (Photo by Rick Nation)

A Bryant team with a fledgling offense, struggling to gel, struggling to get something established, with new starters in 10 of the 11 positions, was faced with a Northside team that — in recent years, had been known for offense — boasts a big, strong, fast defense in 2016.

The result was a 29-0 victory for the Grizzlies — the first shutout a Bryant team had suffered since a 35-0 loss at North Little Rock in 2011.

The score was deceiving because Northside could only muster 168 yards of total offense in the game, had just six first downs and a turnover. The Hornets held the Grizzlies to 39 yards rushing on 31 attempts. 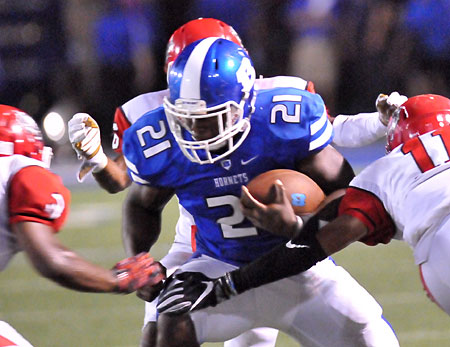 Of that 168 yards of total offense, 139 of it came on four plays, each of which set up scores. That means that the rest of the 35 offensive snaps for the Fort Smith team netted 29 yards.

In addition, Northside’s Tre Norwood returned a punt 62 yards for a touchdown.

“Our defense is good enough to win football games but our offense keeps putting them in bad situations,” said Hornets coach Buck James. “Tonight, our kicking game fell apart. That’s been good for us. But, again, they out-athleted everybody on our punt team. (Norwood) outran everybody on the team, more than once.

“That’s on us,” he declared. “You can’t keep kicking to him in the middle of the field. We’ve got to do a better job on stuff like that.” 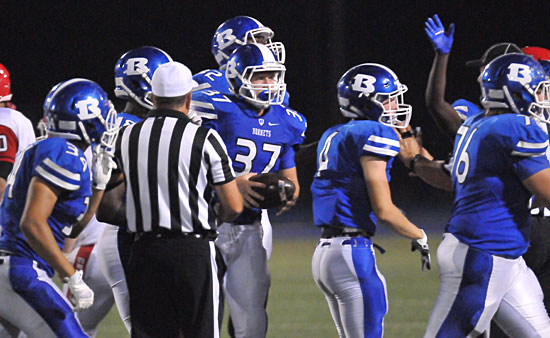 Jakob Neel (37) comes up with a fumble recovery. (Photos by Kevin Nagle)

The Hornets’ offense went through four quarterbacks trying to get something going. The passers, senior Beaux Bonvillain and sophomore Ren Hefley, struggled to find open receivers against a really fast secondary, going 5 for 23 for 49 yards between them in the game. The protection was improved against a tremendous defensive line. There were no sacks.

The aerial frustrations resulted in Bryant being held without a first down in the first quarter. The Hornets started moving the ball when safety Cameron Vail took over at quarterback, running the read option. And when Vail sprained a shoulder, wide receiver Reece Coates took over the quarterbacking duties with Hefley or Bonvillain coming in for obvious passing downs. 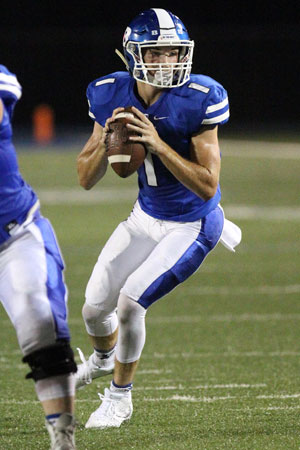 Still, the improved offense was turned back every time the Hornets got into the red zone (inside the opponents’ 20).

“We knew going into the game, they had a good defense,” James said. “The only person I can blame is myself.

“It’s not going to be an easy fix,” the coach said. “It’s not going to happen right away. We look good in JV games but we don’t carry it to the varsity game because the guys are just bigger, stronger and faster than we are. 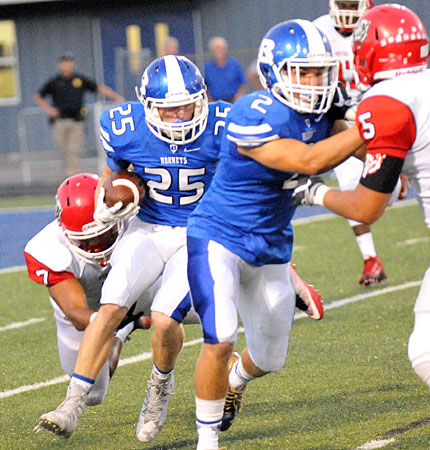 It looked like the game would be a defensive standoff initially as both teams went three-and-out. The difference maker in the half was punter Cheuy Parga. He boomed a 61-yard punt that was covered by the Grizzlies at the 1 before the player that cradled the ball slid into the end zone.

Bryant lobbied for a touchback, which would’ve given them the ball at the 20, but the officials placed the ball at the 1. Jeremiah Long crashed for 9 yards on first down but a 3-yard loss on second down, eventually resulted in a punt by Hayden Ray.

Under pressure, Ray got the punt away but it was a short one and it left Northside 35 yards away from the goal line.

Two running plays picked up 4 yards against the Hornets’ D. On third down, however, the Grizzlies came up with the first of those four big plays. Norwood threw over the middle to H back Colby Fleming who rumbled down to the 1.

Bryant stopped a first down run by Norwood for no gain but, on the next snap, Robert Wilkerson got in for the touchdown. 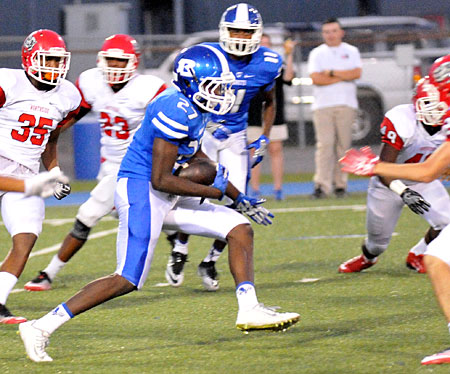 Bryant’s Randy Thomas (27) runs back a kickoff through traffic with teammate Andre White (11) trailing the play. (Photo by Kevin Nagle)

The Grizzlies used the old swinging gate formation to tack on a two-point conversion.

And, as it turned out, the 8-0 score held for the rest of the half.

On Vail’s first series, the Hornets had been punted back to their own 9 but, in 11 plays, they drove to the Northside 13. The drive included runs by Vail for 9 yards early and 13 yards later. Running back Cameron Coleman contributed a 16-yard burst and Vail completed a key pass for 8 yards to tight end Luke Curtis.

At the 13, however, a second-down play was stopped for a loss then so was a third-down run. Ray came on to attempt a 34-yard field goal but a low snap undercut the timing of the kick. Ray got enough of it to reach the uprights but the kick strayed right.

Northside got the ball to start the second half and, right away, the second of those big plays unfolded. Off play-action, Norwood heaved a long pass on which Biyron McGrew made a fingertip catch in stride. He wound up being hauled down at the Bryant 13. 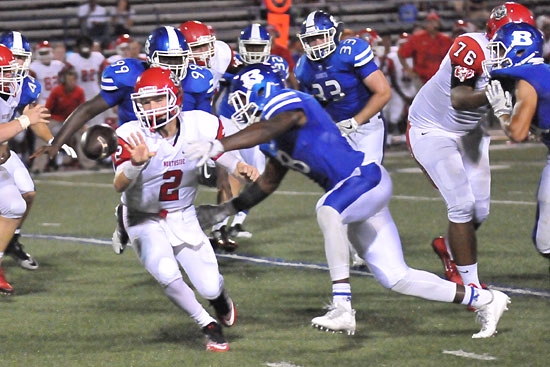 Marvin Moody gets to quarterback Max Frazier as he pitches the ball. Kajuan Robinson (99) and Hayden Knowles (33) follow the play. (Photo by Kevin Nagle)

Despite that, the Hornets’ defense made a stand, spurred by a tackle of Norwood by linebacker Marvin Moody for a loss of 4.

Bryant’s first series of the half was a three-and-out. Ray punted and Norwood ripped up the middle of the coverage for his 62-yard touchdown return. Frazier ran in a two-point conversion again and it was 19-0 with 7:57 left in the third quarter.

The Hornets responded behind the running of Coates, Coleman and Long — primarily Coates — to drive from their own 20 to the Northside 26. But back-to-back false start penalties side-tracked the drive, turning a second-and-8 into a second-and-18 at the 36.

After a pair of incomplete passes, Bonvillain tried to get it to Long on a wheel route down the left sideline only to have Norwood — that guy again — intercept at the 11 and return to the Bryant 43.

The defense, however, got the ball right back for the Hornets. A poor mesh on a handoff resulted in a fumble that Bryant linebacker Jakob Neel claimed at the Griz 49.

The Hornets overcame a holding penalty when Hefley fired a pass to Landon Smith for 17 yards. Long ran it to the 23 on three straight carries. Moments later, Hefley and Smith hooked up on an 11-yard pass to the 14.

But the next two plays were losses and the Hornets turned it over on downs at the Northside 19.

The other two big plays for the Grizzlies came on a drive to a final touchdown as the fourth quarter unfolded. The first was a 22-yard screen pass that caught the Hornets in a blitz. Derrick Wise, out of the backfield, turned it into a 22-yard play that converted a third-and-10 near midfield. On the next snap, Kedrick Thomas dashed 23 yards to the 7. Though it took three tries from there, the Grizzlies got the touchdown on a 1-yard keeper by Frazier with 6:14 left in the game.

Praga added an extra point. Later, with just over two minutes left in the game, Praga drilled a 44-yard field goal to set the final score.

Bryant, now 2-2 on the season, will have a short week to prepare for its next game. The Hornets will face Little Rock Catholic at War Memorial Stadium on Thursday, Sept. 29. The game was moved up a day to allow for preparations on Friday for Saturday’s game between the University of Arkansas and Alcorn State at the Stadium. 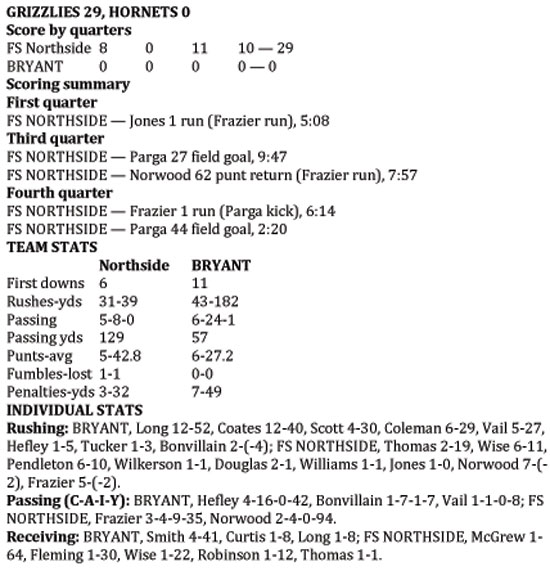